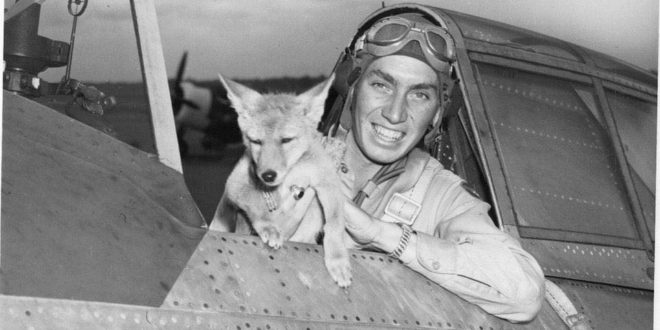 The wildest aviator ever to step inside a fighter plane was actually a coyote named Jeep, who flew combat missions in World War II. While still a puppy, Jeep was rescued by a human pilot, John “Wild Bill” Crump. A Nebraska farmer had asked Bill to get rid of the future trouble-maker; but instead, Bill kept him as a pet.

Bill smuggled the little guy aboard the RMS Queen Elizabeth while headed to the UK.

Jeep made such a hit with the squadron there that he was formally inducted as a member of the 356th Fighter Group at Martlesham Heath. Jeep had his own dog tags, log book, and immunization record. He flew with Bill on five missions in their P-47 Thunderbolt, “Jackie.”

In October 1944, little Jeep was run over on base. He died from his injuries. He was given a military funeral, and was buried at Playford Hall, where Bill was billeted.

When Bill transferred to P-51 Mustangs, he decorated his aircraft with a portrait of Jeep.

Jeep remains the only known coyote to have served in war as an aviator.