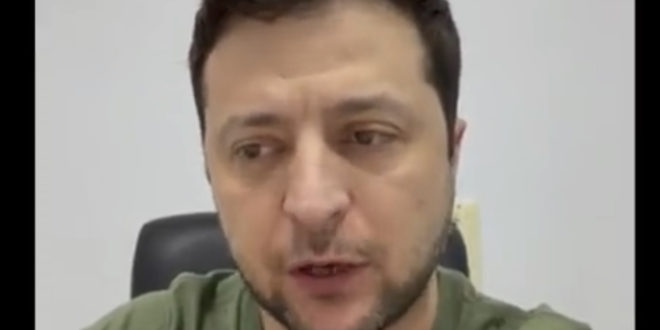 A Leader is on the World Stage: the Infowar

The president of Ukraine Has not let up as he relentlessly mobilizes the world Leaders to his cause. It appears in his latest footage that he hasn’t rested much, and he is not allowing the world to rest until there’s a resolution.

His ongoing urgent requests exemplified by just a few of the latest.

“Had a conversation with the Crown Prince of Abu Dhabi @MohamedBinZayed. Informed about the counteraction to the ongoing Russian aggression. Some topical issues of cooperation were discussed. The support of partners is important.

“Held regular talks with President @RTErdogan. Grateful to ???????? for the consistent support. Informed about the ongoing aggression and nuclear terrorism on the part of the Russian Federation. We must achieve an end to hostilities.

“Held negotiations with IMF Executive Director @KGeorgieva. Discussed financial support for ????????. Grateful for the urgent help already provided by the Fund. The IMF must take the lead in financing the recovery of ???????? after the end of Russia’s aggression.

“Talked to President of the European Commission @vonderleyen. Informed about the aggressor’s nuclear terrorism. Preventing it is our common task. Discussed strengthening sanctions against Russia. The issue of ????????’s membership in the #EU was also on the agenda

President of Ukraine Volodymyr Zelenskyy,is fearless, fighting for his people, mobilizing his allies yet praying for a Cease Fire.

When offered to evacuate by U.S, he said Send me Ammo, I don’t need a ride.

Germany has just announced the provision of anti-tank grenade launchers and stinger missiles to Ukraine. Keep it up, Chancellor @OlafScholz! Anti-war coalition in action!

A new day on the diplomatic frontline began with a conversation with @EmmanuelMacron. Weapons and equipment from our partners are on the way to Ukraine. The anti-war coalition is working!

According to the results of my conversation with @azpresident, all @SOCARofficial gas stations in Ukraine have been instructed to provide fuel for ambulances and SES free of charge. At night we are waiting for a plane with medications from Azerbaijan.

Had a phone conversation with @BorisJohnson. Grateful to the British Prime Minister for his position, new decisions to enhance the combat capabilities of the Ukrainian army. Agreed on further joint steps to counter the aggressor.

In a phone conversation, I thanked @AndrzejDuda for his personal leadership in granting Ukraine membership in the #EU. The concrete daily assistance of Poland to our country is also invaluable.

From AndrzejDuda: Poland advocates an express path for Ukraine’s membership in the EU. The candidate state status should be granted immediately and talks on the membership started promptly thereafter. Ukraine must also have access to EU funds for reconstruction. This is what Ukraine deserves

Incredible Georgian people who understand that friends must be supported! ???????????????? Grateful to everyone in Tbilisi and other cities who came out in support of Ukraine and against the war. Indeed, there are times when citizens are not the Government, but better the Government.

I’m getting support calls. Spoke with President of Switzerland @ignaziocassis and Prime Minister of Greece @kmitsotakis. Thank you for the decisions on concrete assistance.

This is the beginning of a new page in the history of our states ???????? ????????. #MarioDraghi in a phone conversation supported Russia’s disconnection from SWIFT, the provision of defense assistance. Ukraine must become part of the #EU.

The largest demonstration in the modern history of Estonia took place in support of Ukraine. I am grateful to the Estonian people and @AlarKaris for their solidarity in these difficult times. Mr. President, our vyshyvanka suits you.

Talked to Prime Minister of ????????. Thanked @MinPres for the decisions made in support of Ukraine in the defense and security sphere. The anti-war coalition is working!

I continue negotiations with international partners. Had a conversation with ???????? President @presidentaz. We appreciate the humanitarian aid and medicines provided.

Thanked Pope Francis @Pontifex for praying for peace in Ukraine and a ceasefire. The Ukrainian people feel the spiritual support of His Holiness

To deprive the aggressor country of the right to vote in the UN Security Council, to qualify ???????? actions & statements as genocide of ???????? people, to help with the delivery of corpses of ???????? soldiers. Talked about it in a conversation with the #UN Secretary General @antonioguterres.

Previous U.S. must take responsibility for another war to end Ukraine crisis
Next Bill Clinton Foundation to the rescue in Ukraine?