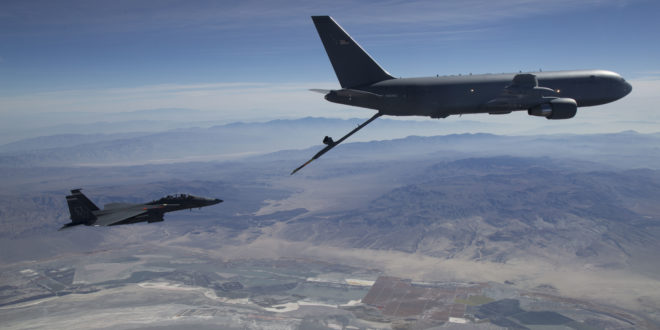 A KC-46A Pegasus aerial refueling aircraft connects with an F-15 Strike Eagle test aircraft from Eglin Air Force Base, Florida, on Oct. 29th, 2018. Squadron from Eglin is assisting with the KC-46A refueling tests. The KC-46A Pegasus is intended to start replacing the Air Force's aging tanker fleet, which has been refueling aircraft for more than 50 years. With more refueling capacity and enhanced capabilities, improved efficiency and increased capabilities for cargo and aeromedical evacuation, the KC-46A will provide aerial refueling support to the Air Force, Navy, Marine Corps, and allied nation aircraft. (U.S. Air Force photo by Master Sgt Michael Jackson).

The Department of the Air Force selected MacDill Air Force Base, Florida, as the preferred location to host the next active duty KC-46A Pegasus aircraft, Dec. 21.

The decision was made after conducting site surveys that assessed locations based on factors related to mission, infrastructure capacity, community support, environmental considerations and cost.

The KC-135 Stratotanker provides the core aerial refueling capability for the United States Air Force and has excelled in this role for more than 60 years. This unique asset enhances the Air Force’s capability to accomplish its primary mission of global reach. It also provides aerial refueling support to Air Force, Navy, Marine Corps and allied nation aircraft. The KC-135 is also capable of transporting litter and ambulatory patients using patient support pallets during aeromedical evacuations.

“At that time, the … implications for day-to-day operations were significant,” Lyons told lawmakers yesterday before a hearing at the House Armed Services Committee. “Since that time, the United States Air Force has done some incredible work, first to make sure that Boeing is signed up to complete the work that they’re under contract to complete. Second, to work through some interim capability releases to allow us to use the KC-46 in operations.”

Lyons said that while the KC-46 refueling aircraft is not compatible now with every aircraft that might need to be refueled, it’s compatible “across a large portion” of them.

The Air Force has also delayed retirement of some KC-10 Extender aircraft, Lyons said. And this puts Transcom in a good position, Lyons added.

“I really appreciate the support of the Air Force,” Lyons said. “I’ve talked to the chief about this, I think we’re in a very good place. I do think it’s the right decision to allow the Air Force to retire the KC-135s that they requested to retire.”g

Transcom is also responsible for the movement of household goods when service members make a permanent change of station. To better serve customers there, Lyons told lawmakers, improvements are underway to better assess how customers rate their experiences with the contract movers Transcom uses to move service members. Right now, less than a third of customers respond to post-move surveys.

“When we look at the survey information that comes in, our estimate is about 30% of the customers … respond on surveys,” Lyons said. “My guess is we get both extremes. But we could do better in that population. We have taken initiative and have put a company under contract to improve our survey process, and that’s underway at the moment … to make sure it’s more accurate, more thorough, easy, and the analytics on the backend are more meaningful to drive better business decisions. That’s one of many initiatives in the area of defense personal property reform.”

Four turbofans, mounted under 35-degree swept wings, power the KC-135 to takeoffs at gross weights of up to 322,500 pounds. A cargo deck above the refueling system can hold a mixed load of passengers and cargo. Depending on fuel storage configuration, the KC-135 can carry up to 83,000 pounds of cargo.

Nearly all internal fuel can be pumped through the flying boom, the KC-135’s primary fuel transfer method. One crewmember, known as the boom operator, is stationed in the rear of the plane and controls the boom during in-flight air refueling.

A special shuttlecock-shaped drogue attached to and trailing behind the flying boom may be used to refuel aircraft fitted with probes. Some aircraft have been configured with the multipoint refueling system, which consists of special pods mounted on the wingtips. These KC-135s are capable of refueling two receiver aircraft at the same time.

Air Mobility Command manages an inventory of 396 Stratotankers, of which the Air Force Reserve and Air National Guard fly 243 aircraft in support of AMC’s mission.

Of the original KC-135As, more than 417 were modified with new CFM-56 engines produced by CFM-International. The re-engined tanker, designated either the KC-135R or KC-135T, can offload 50 percent more fuel, is 25 percent more fuel efficient, costs 25 percent less to operate and is 96 percent quieter than the KC-135A.

Under another modification program, a re-engined tanker with the TF-33-PW-102 engine was designated the KC-135E. In 2009, the last KC-135E retired from the inventory.

Through the years, the KC-135 has been altered to do other jobs ranging from flying command post missions to reconnaissance. RC-135s are used for special reconnaissance and Air Force Materiel Command’s NKC-135As are flown in test programs. Air Combat Command operates the OC-135 as an observation platform in compliance with the Open Skies Treaty.

The KC-135R and KC-135T aircraft continue to undergo life-cycle upgrades to expand their capabilities and improve reliability. Among these are improved communications, navigation, autopilot and surveillance equipment to meet future civil air traffic control needs.