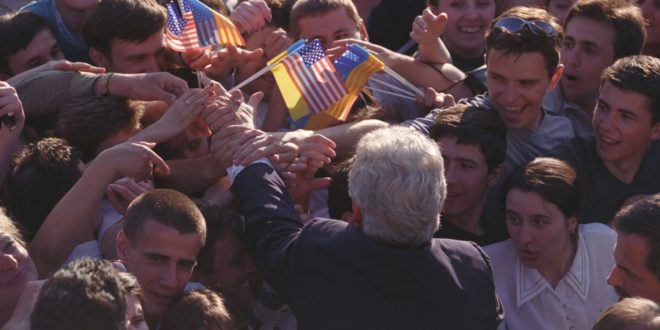 Bill Clinton Foundation to the rescue in Ukraine?

As the @UN reports that more than 1M people have fled Ukraine, and many are still caught in the conflict, we’ve compiled a list of organizations in the @ClintonGlobal community providing critical support to civilians.

“Unprovoked and Unjustified “ Ukraine Invasion is the mantra of DOD, NATO and the Swamp designed to brainwash Americans with the world used over and over in every context by any and every official willing to deny or have no clue of historical. NATO, U.S. Biden and Company historical facts:

In Brussels today, @SecBlinken and his @G7 counterparts discussed the urgent crisis of Russia’s premeditated, unprovoked, and unjustified war on Ukraine. The G7 stands united in supporting the government and people of Ukraine.

NATO has been provoking Russia for years as it attempts to hang on to its purpose according to Putin and his allies. Putin lies says NATO as it amasses troops conducting “Exercises” on Russia’s border, heavily arms neighboring countries, including $1B to Ukraine.

I some of 5e most deceptive language NATO rebuts Putin’s claims:

NATO is a defensive alliance, whose purpose is to protect our member states. Our exercises and military deployments are not directed against Russia – or any other country.

This myth also ignores geography. Only 6% of Russia’s land borders touch NATO countries. Russia has land borders with 14 countries. Only five of them are NATO members. Ukraine becoming a member is no threat says NATO.

NATO goes on to deny its true roles in the Baltic’s, Iraq and Libya. “NATO’s interventions in the former Yugoslavia, Kosovo and Libya prove that the Alliance is not defensive,”

Bottom Line, NATO, having been attacked for losing its purpose, fiercely defends its purpose with the Big $$$$ Rice Bowl overflowing.

In double talk NATO refuses to recognize the Donbass clambering for independence and freedom.

Long forgotten are the unclassified documents of the Clinton Library

”This Mandatory Declassification Review contains records regarding Ukrainian oligarchs and organized crime. Included are reports from the Department of Justice providing an assessment of Ukrainian organized crime and an FBI report regarding a request for DOJ assistance to Kiev. Also included are documents regarding Former Ukrainian Prime Minister Lazarenko’s 1999 appeal for political asylum in the United States.,”

And then there is Biden who has been building up for another Wag the Dog war since he took office. “Over the past year, the official said, as much as $1 billion in aid has been delivered to Ukraine,” DOD reports.

Perhaps to distract from the Biden/Hunter Ukraine connection according to another official source, the Congress?

Also forgotten is the Clinton Wag the Dog war in Kosovo that distracted from his sleazy sexual liaisons in the White House and Impeachment effort.

Previous A Leader is on the World Stage: the Infowar
Next Sp5c. Sasser, Vietnam, under fire, ran across rice paddy to assist wounded