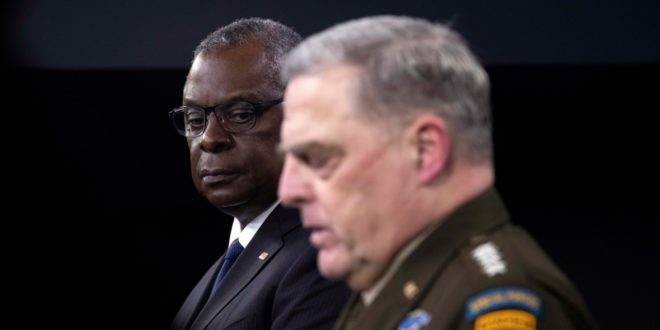 1. Sharp Decline in Trust and Confidence in the U.S. Military

confidence in the military, which is down 20 points since 2018. Confidence is lower among young Americans than any other demographic subgroup, including ideological, religious, ethnic, economic, or geographic region.

While the military continues to top the list of trusted institutions, the trend of declining trust is occurring more rapidly for the military than it is for other public institutions (Figure 1). The military has declined in trust by 25 points since 2018, while law enforcement has declined by 17 points from 50% to 33%. Those who say they have a great deal of confidence in the presidency declined by 9 points, from 28% to 19%, since 2018. The Supreme Court has also declined by 9 points, from 27% to 18%. Congress and the news media have had generally stable levels of trust and confidence since 2018.

Reason for Declining Confidence in the Military

Among those with little or not much confidence in the military, their answers were more mixed. The most common answer was political leadership, at13%, followed by servicemembers and anything related to scandals within the military, both at 9%. Close behind at 8% were the military leadership and the concept that the military is too expensive or has the wrong priorities. While high trust and confidence seems to attribute to our men and women in uniform, the lack of confidence in our military seems to be more about a general negative sense than a predominate or precise reason.

In 1976, Ronald Reagan admonished, “[W]e are number two in a world where it is dangerous, if not fatal, to be second best.” The American people believe we are now in that same dilemma. Overall, Americans are split between believing the U.S. military has the best capabilities in the world and that the military is only one of the best in the world (Figure 2). When asked how they think the U.S. military is doing compared to other militaries, 43% believe the U.S. military is the best in the world in overall capabilities, whereas 45% think it is only one of the best. The answers to this question track closely with trust and confidence in the military, as those with greater confidence in the military tend to think more highly of its capabilities. Still, when asked to identify which country has the best military, 69% named the United States. The second most common answer was China at 17%.

Only one-third (33%) believe the United States strikes the right balance between the use of the military and diplomacy. A roughly equal number(32%) believe America uses the military in too many situations where diplomacy would be better.

2. Growing Ambivalence about U.S. Leadership in the World

5). Therefore, despite waning support for global engagement, this may not indicate a growing preference for isolationism overall. There does, however, seem to be a notable shift among Democrats. Those voters have moved from 59% believing the United States should be more engaged in February to only 46% in November. Correspondingly, the number of Democrats preferring less engagement jumped 100%. Among Republicans, the preference for global engagement now matches Democrats at 46%, with 30% preferring less engagement. The preference for internationalism grows among the more educated and among those ages 65 or older.

within the country (35%), from outside (31%), and from both equally (31%). Independents align more with Republicans on this point.

Despite this growing ambivalence about U.S. leadership and greater concern about threats from within, Americans still overwhelmingly support a forward-deployed military presence abroad. Nearly two-thirds (65%) believe it is better for the United States to maintain military bases around

on this point as well, with 59% of Democrats, 56% of Independents, and 75% of Republicans support maintaining bases overseas.