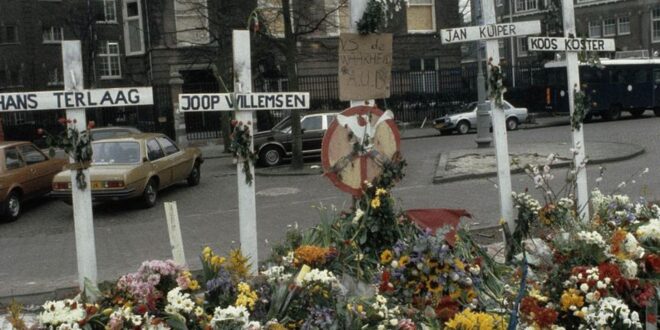 A retired Salvadoran army officer was found living in the U.S., where a Salvadoran judge sought last year to extradite him from in connection with his alleged role in the 1982 murders of four Dutch journalists.

The retired colonel, Mario Reyes Mena, was named in a United Nations-sponsored initiative, the Commission for Truth in El Salvador, as being responsible for the ambush that surprised and killed the journalists.

The retired Col. Reyes Mena was spotlighted in the Dutch the 2018 documentary “In Cold Blood,” examining the 1982 ambush assassination of the film crew.

The four television journalists were killed near Santa Rita, El Salvador, while they were covering the civil war between the government and the Farabundo Martí National Liberation Front, or FMLN, guerrillas. The four – Koos Koster, Jan Kuiper, Joop Willemsen and Hans ter Laag – had planned to spend several days reporting from behind rebel lines.

A Salvadoran judge last year ordered the provisional arrest of retired high-ranking members of the armed forces accused of being involved in the killings. Among those named are former defense minister Gen. José Guillermo García and Col. Francisco Antonio Morán, former director of the now-defunct treasury police, according to the Associated Press. The ruling also ordered that authorities begin extradition proceeding for Col. Mario Adalberto Reyes Mena, the outlet reported.

A Dutch film crew found Reyes Mena several years ago in Virginia, and approached him at his residence there. He denied being culpable.

“The U.S. government investigated in depth and found nothing against me,” Reyes Mena said in Spanish to the film crew that confronted him in Virginia.

READ MORE about top former military officers who were arrested in connection with this case.

Reyes Mena posted in 1986 to the Salvadoran embassy in Washington, D.C., as a military attaché. He retired while in the United States, and in 1987 was granted U.S. citizenship. Except for a few minor traffic citations, he then led a quiet life.

Documents and recollections from others describe a gruesome scene surrounding the 1982 executions.

According to the Truth Commission report, the assassination “was entrusted to a patrol from the Atonal Battalion, which left the El Paraiso barracks at 5 a.m. on 17 March in order to avoid detection, and remained in the hills all day awaiting the group’s arrival.”

In a declassified 1982 U.S. State Department memorandum, then USMC major John McKay, assigned to the U.S. embassy in San Salvador, rendered his professional findings after visiting both the ambush site and then the 4th Brigade headquarters.

McKay had received a phone call from a Salvadoran friend at the Salvadoran air force base near the capitol. “He told me something very bad had happened and that I might want to go out to the 4th Brigade,” McKay recalls. Upon hearing what was being reported, the Marine officer – a decorated and wounded veteran of the war in Vietnam – asked for a Salvadoran helicopter to fly him to the location. By 0530 Hours he was on the ground.

“I saw the bodies,” McKay recalls. He then asked to speak with the 4th Brigade commander, Colonel Reyes Mena. “I was told he was not available.” He then asked to speak with an American Special Forces sergeant who belonged to a team that trained the second Salvadoran Immediate Reaction Battalion, the ATONAL. It was a platoon from this unit that Reyes Mena had used as his ambush team. The sergeant did not speak to McKay.

In contrast, within hours of viewing the bodies of the Dutch, brought to the 4th Brigade by error (they were to have been stripped naked and thrown into the Lempa River, according to the original plan), U.S. Special Forces Sergeant Angel Chamizo called the U.S. MilGrp in San Salvador with his observations. His doing so was in concert with U.S. reporting policy for all American advisers, trainers, and MilGrp staff in El Salvador.

As the investigation into the murders moved forward, a formal statement from Sergeant Chamizo was submitted for the record. The below is the English translation of that statement as originally submitted to the Dutch investigator.

“From Feb to May 82, I was one of the 23 US Mil advisors that was training the 600-man ATONAL-battalion in El Paraiso. I did not have any business with the 4th Inf Bat and hardly had any contact with them (sometimes in the mess).

“On March the 17th, I sat with some colleagues on the sidewalk of our barrack, when some Salvadoran officers excitedly called to us: “finally success, a complete guerilla-patrol has been taken down by ambush, we must celebrate. The bodies lie in a truck outside of the camp. Have a look”. Out of curiosity, I went to see their success. It was pitch black outside. There was a guard at the truck. With a flashlight, I shone light on the naked (standard procedures) bodies. I remember to have seen 6 bodies, of which 4 physically, by facial character and skin color, did not resemble Salvadorans, the other 2 did.

“Their lethal wounds were by my strong impression (and I know what I’m talking about) not caused by “close range shooting.”

“Back in the camp, I reported to a present officer of the comandancia that I doubted that all of them were “muchachos.” Subsequently, they showed me the belongings that the patrol had taken with them. They had left the clothing at the scene…. They showed me backpacks, photo cameras, a TV-camera, film rolls, medicine (i.e., boxes with anti-malaria pills, bought in Amsterdam, according to the label), TV-batteries and ID-cards (I did not read the names) and a M-16 rifle. I do not remember other items right now. I got convinced that at least a few journalists got killed. The Amsterdam-label let me believe that they were Dutch.

“He took the ID-cards with him and disappeared into his office, saying something like we will look into it.

“Subsequently, I went to my barrack, because I had an early shift next day and a heavy training program. I vaguely told my colleagues some things and mentioned the word stupidity.

“Later on I heard that the 4 Caucasians were brought to sickbay after I took action.

“Early in the morning, the bodies were picked up by helicopter, to be taken in boxes to the capital. The dead had received military honors and were –they told me- treated with dignity.

“In the late afternoon, I accidently walked into the instruction room where the sergeant of the patrol and an officer gave a press conference. The blackboard still showed the ambush position of the patrol.

“Meanwhile at the camp, many realized – especially the officers- that they had made a mistake. The sergeant involved and some of his men were mocked already allegedly. I also heard that the comandancia had given them hell.

“I have also reported to my superiors, both from my own initiative, but also in reaction to questions asked.”

Major McKay’s report was submitted to the U.S. State Department. Its finding is clear. The Dutch film team had been deliberately targeted by the ATONAL platoon under direct orders from Colonel Mario Reyes Mena.

The platoon was selected because most of the soldiers under the command of Reyes Mena at 4th Brigade were poorly trained, would not patrol more than 5 kilometers from the base, and were afraid to remain outside the base after dark.

In July of 2021 charges reportedly were filed against those Salvadoran soldiers alleged to have carried out this atrocity. The charges were filed in El Salvador.

Colonel Dennis Moran and General Jose Garcia were arrested and continue to be held in custody. They are reported to have been moved from their jail cells to a private hospital in El Salvador for “health reasons.”

Citizenship courtesy of the CIA?

A source retired from the CIA has shared that Mario Reyes Mena was granted U.S. citizenship, although the circumstances remain unclear. Should this information be correct it would explain why there has not appeared to be any movement in extradition or deportation actions against Reyes Mena.

Greg Walker is an honorably retired “Green Beret” with wartime service in El Salvador, and later Iraq as a combat adviser. He is the co-founder, along with Colonel (ret) John McMullen, of the Veterans of Special Operations – El Salvador, the organization that was successful in its effort to see the war in El Salvador officially declared a U.S. military campaign, to include combat awards and decorations. He is also a retired Oregon law enforcement officer. He lives and writes from his home in Sisters, Oregon, along with his service pup, Tommy.

Previous Hero Cop Used Screw Drivers to Pull Her Kayak Through Ice to Reach Stranded Pilot
Next New in Soldier of Fortune: A Message From Publisher Susan Katz Keating