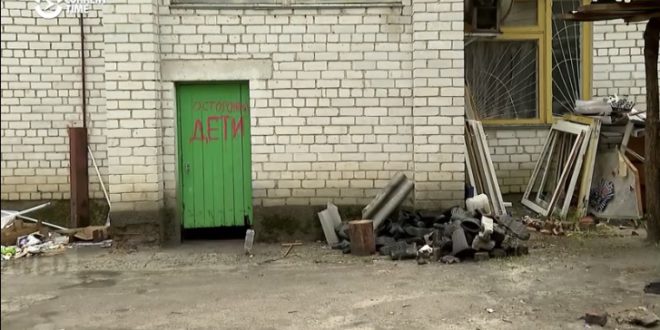 Eyewitnesses to War: Villagers Kept Record of Who Died Inside Airless ‘Dungeon of Death’ in Ukraine

The elderly and sick died quietly.

Crowded with hundreds of others held captive by Russian soldiers for four weeks in an airless, unsanitary school basement in Yahidne, a village in the Chernihiv region of northern Ukraine, the ill and the frail were particularly vulnerable.

Several could not withstand the lack of medicine, food, fresh air, and overall comfort in the dark, stuffy rooms they shared with more than 300 other captives of the invading forces, survivors said.

One person died every three days on average, Valeria Vidkovska, 20, recalled. Sometimes, she said, their deaths went unnoticed until they did not get up for daily food rations.

Fellow captives “would try to wake a person up when the distribution of food begun, but the person would already be cold [from death],” she told RFE/RL in an interview.

“It was dark in there, everyone was sitting, they didn’t walk, [so] it was impossible to know that someone had died,” she said.

By the time Russian forces retreated from Yahidne and the survivors emerged almost a month after they were forced into the school basement, 10 people had died, according to a record scrawled by the captives on a wall. The toll was confirmed by Ukrainian Prosecutor General Iryna Venediktova and the UN high commissioner for human rights.

Another 17 residents of Yahidne were killed during the Russian occupation of the village, according to Venediktova, who last week charged nine Russian soldiers in absentia with war crimes for their alleged actions there.

The charges are among the latest on a growing list of alleged atrocities by Russian forces since President Vladimir Putin launched a large-scale invasion of Ukraine on February 24.

On March 3, Russian troops from the 55th Motorized Rifle Brigade entered Yahidne, which lies 15 kilometers south of Chernihiv along the main highway to Kyiv, as part of a larger Russian push from the north toward the Ukrainian capital.

Amid fierce resistance from Ukrainian forces, the Russian drive toward Kyiv was halted and the troops hunkered down in the village, turning the local school into a temporary headquarters and unleashing terror on residents, according to survivors. Members of the brigade began rounding up people up the following day and forcing them into the school basement at gunpoint, they said.

Vidkovska’s family was among the first to be taken into captivity, though her grandparents were initially allowed to stay at home due to ill health.

Within a week the number of captives in the basement — which consisted of a gym and four or five small rooms used as storage for window frames, broken desks, and other old items — grew from a few dozen to more than 300, she said.

They included a 6-week-old infant, dozens of other children, and several elderly people of whom the oldest was 93, according to Venediktova.

The newcomers brought information about what was happening aboveground in the village, including who had been killed. Russian troops destroyed the cell phones of captives, leaving them with no way to communicate with the outside world.

Vidkovska’s grandparents were among the later arrivals, after Russian soldiers evicted them from the family’s renovated apartment.

Residents forced to go to the school basement took with them what they could quickly gather from their homes, such as blankets, jackets, and food. They slept on the floor, including in the narrow hallways between the rooms, or on the desks, Vidkovska said.

One of the few photos from inside the basement during captivity taken by an individual who managed to hide his phone shows dozens of people crowded in a room shoulder-to-shoulder.

There was no toilet in the basement.

During the first week, captives were forced to use buckets as toilets until the basement became too crowded and unsanitary, Vidkovska said.

Russian soldiers later sometimes allowed residents to exit the building to use a toilet, smoke, or cook between 8 a.m. and 6 p.m. — though they sometimes canceled that if there was shelling, if they wanted to punish captives, or for other reasons, she said.

They were not allowed to leave the school grounds.

“It was really hot” inside the basement, Vidkovska said. “There was nothing to breathe. The older people started to die because there was little food, no air, no medicine.”

The Russian soldiers removed the dead bodies and placed them in the school’s boiler building where captives would occasionally wash and get hot water for tea, she said. The corpses could remain three for days if there was fighting raging in the village and it was not safe to bury them, she said.

The captives kept track of the deaths, recording the person’s name and the date they passed away on a wall in one of the rooms.

When Ukrainian forces drove the Russian military out of Yahidne at the end of March, some of the captives had nothing to return to.

Homes were destroyed, emptied of valuables, and in some cases, mined with explosives.

Russian soldiers gutted the apartment where Vidkovska lived with her family, according to a video her mother made upon returning to their building.

Vidkovska estimated that as many as 20 Russian soldiers may have lived there during the occupation.

The Russian soldiers stole the family’s three flatscreen TVs, fur coats, and other clothing and badly damaged the walls and doors of the apartment, Vidkovska’s mother said in the video.

Theft of jewelry, appliances, and consumer goods by Russian soldiers during their invasion of Ukraine has been widespread and well documented in photographs and videos.

Many of the soldiers Ukraine suspects of taking part in the debauchery in Yahidne, including the nine accused of war crimes, are from the Siberian region of Tyva, one of the poorest in Russia.

Olcha Mongush, the wife of Nazyty Mongush, one of the soldiers charged with war crimes, denied the accusations against her husband and claimed he helped the residents of Yahidne.

“The residents were grateful [for the help of the Russian soldiers] and now they say all this behind [their] backs,” she said in a response to RFE/RL through social media, without providing evidence to support the claim.

In a May 12 address on the human rights situation in Ukraine, UN High Commissioner for Human Rights Michelle Bachelet said that in addition to Ukrainian civilians killed in the hostilities or apparently summarily executed, others “have died because of stress to their health caused by hostilities and the lack of medical aid. They have spent weeks in basements being threatened by Russian soldiers with abuse or death if they tried to leave.”

“In the village of Yahidne in Chernihiv region, 360 residents, including 74 children and five persons with disabilities, were forced by Russian armed forces to stay for 28 days in the basement of a school that they were using as their base,” she said. “The basement was extremely overcrowded. People had to sit for days without an opportunity to lie down. There were no toilet facilities, water, or ventilation. Ten older people died.”

Asked about the basement ordeal in an interview with the BBC that was published on June 16, Russian Foreign Minister Sergei Lavrov did not specifically deny the UN report but suggested that Bachelet might have been misled.

“It’s a great pity, but international diplomats, including the UN high commissioner for human rights, the UN secretary-general, and other UN representatives, are being put under pressure by the West. And very often they’re being used to amplify fake news spread by the West,” he said without evidence.

Vidkovska and her family, meanwhile, have taken temporary refuge in Germany.

Though they are safe and far from the front line in the war, whose end is not in sight, they bear the emotional scars of that harrowing month, Vidkovska said in the interview from Germany.

“Sometimes my mother wakes up from nightmares that someone is bombing us,” she said.