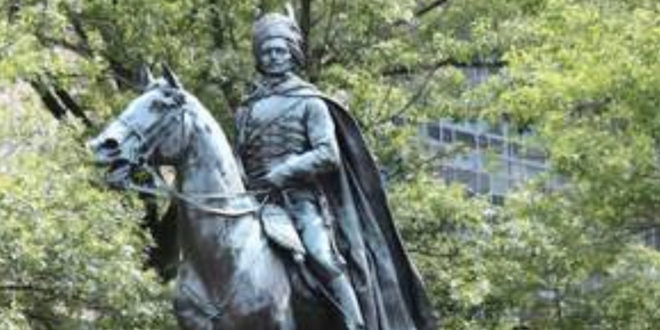 Casimir Pulaski (1745-1799), a Polish soldier and commander, was recruited for the American Revolution, where he made his mark as a cavalry officer and came to be known as "The Father of American Cavalry." Pulaski was mortally wounded in battle at Savannah, Georgia.

White House: On General Pulaski Memorial Day, we honor Brigadier General Casimir Pulaski, a Polish-born hero of the American Revolution, who gave his life 242 years ago in defense of our cause to establish a free and independent Nation.  Known as the “Father of the American Cavalry” for his leadership and military skills, General Pulaski’s service and sacrifice remain a shining example of the countless contributions that immigrants have made to help build our great Nation.

Today, General Pulaski’s legacy and contributions to our democracy are honored by more than 9 million Polish-Americans in communities across our country.  Polish-Americans have played an integral role in the growth of our Nation — defending our country in uniform, protecting our communities as first responders, starting new businesses and growing our economy, educating the next generation of American leaders, working on the front lines of the pandemic, and creating art that inspires us, to name just a few examples.

In 1929, the Congress recognized General Pulaski’s enduring impact on American society by declaring October 11, “General Pulaski Memorial Day.”  Eighty years later, the Congress granted him honorary United States citizenship.  Today, States, cities, and communities all across our Nation celebrate the memory of General Casimir Pulaski at parks, schools, and landmarks that bear his name — serving as a reminder of his heroism and the sacrifice he made in defense of our newly formed Nation.

On this day, we celebrate the life of General Casimir Pulaski and the ideals and democratic values for which he bravely gave his life — values shared by the United States and Poland, which underpin the enduring bond of friendship between our countries.

Previous Sailors charged in leaked video of F-35C crash on USS Carl Vinson
Next The Biden Camp to NATO and the U.N.: “Every country in the world” is at risk as Putin plans Invasion, Hit squads, Concentration Camps