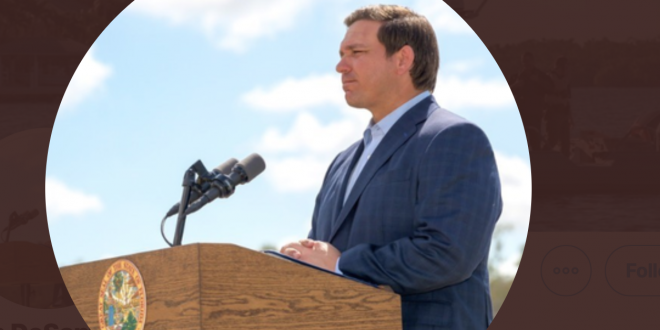 Gov DeSantis accuses Biden of running what amounts to a “Human Smuggling” Operation: State of Florida sues DHS and Biden

Governor DeSantis claims that 70 flights were conducted at night carrying illegal immigrants and transporting them to Jacksonville Forida.

“If you sent (them) to Delaware or Martha’s Vineyard, that border would be secured the next day,” DeSantis said last week in Jacksonville when unveiling a series of proposals designed to address undocumented immigrants being transferred to Florida.

OV. RON DESANTIS: So, the border is obviously a disaster and some people say, ‘Well, that’s a problem for Texas or Arizona.’ Well, actually, the Biden administration puts people on planes and flies them into Florida in the wee hours of the morning. They’ve done over 70 flights in the last six months, dump people here. And we had—a few weeks ago—one of those people that Biden dumped, ended up committing a murder in northeast Florida. So, these are crimes that would not have happened but for Biden’s recklessness. So, our view is, if they’re going to be dumping, we want to be able to facilitate transfer to places like Delaware, and, so, we have $8 million in my new budget to be able to do that. We also look to these carriers that the federal government is contracting with, and we are going to pass legislation that says, ‘If you are facilitating Biden’s policies, which is effectively a mass human smuggling operation, you are not going to be able to do business with the state of Florida or other local governments, and we are going to charge you restitution for each individual that you are bringing. The Governor was speaking on Fox News.

Gov DeSantis latest policies include $8M funding to send illegal immigrants to other locations and sanction companies that violate the orders.

Today, Governor Ron DeSantis was joined by Congressman John Rutherford, Jacksonville Mayor Lenny Curry, Jacksonville Sheriff Mike Williams, and Public Safety Czar Larry Keefe to announce new proposals to fight illegal immigration and protect Floridians from the Biden Border Crisis. Governor DeSantis announced proposals for the upcoming legislative session to hold accountable private entities that knowingly or recklessly assist the Biden Administration in resettling illegal immigrants into Florida. The legislation would also strengthen E-verify enforcement and codify and build upon the steps he has taken to protect the state of Florida through

Executive Order 21-223. Additionally, Governor DeSantis announced that the Department of Children and Families (DCF) published an emergency rule to prohibit the issuance or renewal of any license to house unaccompanied alien minors who seek to be resettled in Florida unless there is a cooperative agreement between the state and federal government. A one pager on the proposal and the DCF rule can be found here. “We have a responsibility to stand up for the rule of law, we have a responsibility to the Constitution, and we have a responsibility to stand up against an administration that has decided they don’t want to have a secure border,” said Governor Ron DeSantis.

“These are a robust series of proposals and I believe we are going to get a lot of support from the legislature. The laws of our country require us to enforce the law and that is what needs to be done.” “This crisis at the southern border is not the result of a failed policy from the Biden Administration — it is their policy,” said Congressman John Rutherford.

“The decision to move illegal immigrants into Jacksonville threatens the lives of folks here in Northeast Florida. Enough is enough. I’m thankful that Governor DeSantis is putting the safety of Floridians first and is fighting back against the Biden open border agenda.” “I’d like to thank Governor DeSantis for continuing to advocate for a safer and more secure Florida. I also stand with him and support this proposed legislation,” said Mayor Lenny Curry.

“Like the Governor, I want more information about who is on these flights, and how these individuals are being vetted and screened. This is not about vilification. It’s about verification.”  “I am grateful that the Governor has not wavered in his efforts to keep Florida safe and in his support for those men and women on the front lines working hard at it every day,” said Jacksonville Sheriff Mike Williams.

“I think it is important that the people of Jacksonville and all across our state understand the concerns we are all facing and how it should matter to everyone. If it is our job in law enforcement to keep our communities safe, that job is challenged when we have work with nothing more than the unknown.”  “The Biden administration has continued to ignore its sworn duty to secure our border, to enforce immigration laws, and to protect Florida from illegal immigration,” said Public Safety Czar Larry Keefe.

“Governor DeSantis’ proposals announced today will help us shut down the human smuggling pipeline to Florida and deter criminals who put unaccompanied children in harms way for their own gain. Thank you, Governor DeSantis, for leading this fight.”

The legislation proposed today will make clear that the State of Florida will not provide any discretionary benefits to illegal aliens and will also prohibit state and local agencies from doing business with any private entities that facilitate the resettlement of illegal aliens in the state of Florida from the southern border.  Governor DeSantis also announced that DCF published an emergency rule today that prohibits the issuance or renewal of any license to provide services to Unaccompanied Alien Children (UAC) who seek to be resettled in Florida unless resettlement is governed by a cooperative agreement between the State of Florida and the U.S. Government. For UAC already present in the state, the emergency rule requires licensees to conduct regular welfare checks.

The DCF emergency rule can be found here. Today’s announcement builds upon the actions Governor DeSantis has previously taken to protect Floridians from the dangerous impacts of the lack of immigration enforcement by the Biden Administration. On September 28, Governor DeSantis announced actions to address the Biden Border Crisis, including issuing Executive Order 21-223 and the appointment of Larry Keefe as Florida’s Public Safety Czar. Details on this announcement can be found here.

By signing the Biden Border Crisis Executive Order, I am working to hold this administration and the federal government accountable for refusing to enforce the immigration laws of this country.

Today, Governor DeSantis was joined by Attorney General Ashley Moody to announce three significant actions Florida is taking to address the Biden Border Crisis. First, Governor DeSantis has issued Executive Order 21-223 to prohibit all Florida agencies under the purview of the Governor from facilitating illegal immigration into Florida, unless otherwise required by federal or state law, and require the collection of information from state officials on the scope and costs of illegal immigration in Florida. Second, Governor DeSantis announced the appointment of Larry Keefe, former U.S. Attorney for the Northern District of Florida, as Public Safety Czar to ensure the actions directed by the executive order are carried out. Finally, Governor DeSantis and Attorney General Moody announced that Florida has filed suit against the Biden Administration challenging its “catch and release” policy.

“Since President Biden took office – which has been less than one year – the Border Patrol has released nearly a quarter million illegal aliens into the United States,” said Governor Ron DeSantis. “This executive order makes it clear that Florida resources will not be used to prop up the failed open border agenda enacted by this administration. Attorney General Ashley Moody has also filed a lawsuit against the Biden Administration challenging its policy of catching and releasing the staggering number of illegal aliens apprehended at the border into the United States.

“Further, I am proud to appoint Larry Keefe, the former U.S. Attorney for the Northern District of Florida, to serve as Public Safety Czar as we take key steps to protect Florida taxpayers from bearing the burden of reckless immigration policies. We will continue to hold the federal government accountable for refusing to enforce the immigration laws of this country.”

“The Biden Administration’s brazen disregard for federal immigration law is jeopardizing the safety and security of our state and nation, all while costing Florida taxpayers. Biden’s lax border policy is an open invitation to dangerous criminals, human traffickers and drugs traffickers to enter the United States—creating a crisis at the Southern Border like we have never seen,” said Attorney General Ashley Moody. “Because Biden is not requiring those crossing the border to go through the legally mandated channels, they are coming into our country without being properly processed. The federal government cannot simply ignore federal laws because it does not agree with them politically. The Biden administration must implement the immigration policy required under federal law and we are asking the court to take swift action to reduce the harm caused by Biden’s inaction.”

“As a former U.S. Attorney, I saw illegal aliens that would get deported and come back, and then get deported and come back in an endless cycle,” said Larry Keefe, Public Safety Czar. “The states, including Florida, bear the brunt of this cycle. Over the coming weeks and months, our state agencies will be addressing the impacts illegal immigration has had on our state. I want to thank Governor DeSantis for appointing me to lead these efforts.”

Today’s announcements build off previous actions taken by Governor DeSantis. Most recently, the Governor sent a letter to Alejandro Mayorkas, Secretary of the U.S. Department of Homeland Security on August 26th, urging the Biden Administration to provide more transparency concerning the resettlement of illegal aliens in Florida and to consult in advance with state leadership before illegal aliens are resettled in the state. The letter has gone unanswered.

A one-pager on the order can be found here.

A summary of the order can be found here.

An FAQ document can be found here.

The full text of the executive order can be found here.

A copy of the complaint in the suit against the Biden Administration can be found here.

Previous B-52s Over Hanoi, 1972 – Operation Linebacker and the Christmas Bombing
Next Army Officer Alan Alda’s show was based on M*A*S*H’ units in Korean War