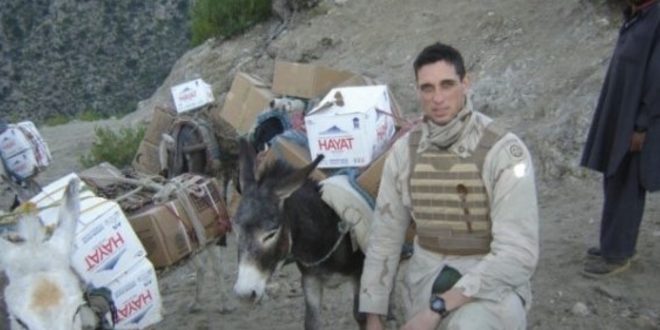 PFC Hansen, while being resupplied during a mission.

I opened my eyes. It was still dark, but I could see the night was ending and another day in some village in Afghanistan was beginning. The smell of dip-spit and cigarette smoke betrayed the fact that the platoon was awake and breaking down the patrol base. “Get the f*** up, Hansen,” was the greeting from my team leader. “Get your s*** on the humvee, we’re leaving in a few mikes.” “Roger, Sergeant,” I replied. It was May 31 2005, and time to win over more hearts and minds in the War on Terror.

We listened to the convoy brief. The platoon would be heading to another village, in the middle of nowhere, to help villagers that probably had no idea why Americans were in their country and couldn’t care less about ‘democracy.’ The typical information was passed down about the scope and purpose of the mission followed by the monotone, repetitive, “Keep your heads on a swivel” and, “Make sure we have full, three-sixty security at all times. Remember your battle drills.”

The platoon set out. One by one, the humvees departed the patrol base and entered the dirt road into the village; the mission had officially begun. As we embarked, I noticed not a single villager was outside their mud-hut. Not a single person was in the fields. Not a single child was running alongside our vehicles, screaming, “You give me chocolate,” or “Amereekan, give me one dollar!” Of the dozens and dozens of villagers we had treated the day before during our MEDCAP [Medical Civic Action Program] operation, not a single one was outside to bid us farewell.

The previous day we setup a temporary medical aid-station immediately outside the community. Elements of our unit invited any Afghans with ailments to come by and receive medical care from our personnel. The civilians stood in line for hours, and eventually, every single one of them received treatment, along with medication; all of them left with a smile, coupled with a tube of toothpaste and a toothbrush for basic hygiene. This was a successful MEDCAP, the hearts and minds campaign was alive and well in this tiny corner of Afghanistan.

We continued down the dirt passage. The sun had made its way over the mountains, fully illuminating the fields and the absence of anyone tending them. At this hour in the morning, I had never experienced this; I had an eerie feeling about our exfiltration from this locale. Suddenly, I saw movement in my peripheral vision to the right; I trained my eyes on the spot to catch a quick glimpse of a woman pulling her child inside the door. She left the door ajar slightly, and looked at our convoy as we slowly made our way down the roadway. From behind her burqa, she noticed me look at her and immediately closed the door. I returned my gaze to the front of the convoy. Something wasn’t right.

The front of the motorcade approached a small rock wall lining the perimeter of a field. The road choked into a small thoroughfare, only wide enough for one vehicle. We crept through the passageway, careful not to veer too far off to the right into a drainage ditch, or left into the stone divider. I continued pulling security towards the front of the convoy and saw an abrupt flash, followed immediately by black smoke. I didn’t hear anything. Time seemed to stand still. Something had just gone wrong, but I had no idea what.

“IED! IED! IED!” My squad leader screamed. Instantly time fast-forwarded to the moment immediately after the roadside bomb detonated. “Dismount! Hansen get the SAW on line. Shoot at anything that fucken moves!” I grabbed the light machine-gun, laid out prone along the road and scanned the village. “Medic! Medic! Bring the fucken medic!” Doc grabbed his aid-bag and sprinted past our position. “Third squad, get up here!” My platoon sergeant ordered us to his position. I grabbed my weapon and ammunition and followed my squad to the blast-scene. As I approached the position, I looked to my right and saw three soldiers laying on the ground. All of them were bloody – so bloody I couldn’t recognize them.  The left forearm on one of them was dangling from the bicep. Doc was rendering aid.

The squad spread out and started sweeping the area, looking for the trigger-man. We approached the nearest compound, a thick-walled mud-hut, and kicked in the door. Each member entered and cleared our respective corners. Afghan civilians, eating breakfast, looked up at us in sheer horror, as we grabbed them, threw them against the floor and violently searched them for weapons. We found nothing. The interpreter questioned them. They knew nothing. The other squads had the same results. The trigger-man had gotten away.

We came out of the compound and saw our buddies being loaded onto the MEDEVAC bird. Our platoon came here to provide medicine and treatment to villagers, to show them goodwill and win over their support. Not a single one of them warned us that a bomb would be waiting for us as we departed. No villagers signaled us to stop. No one helped us. From that moment on, I did not care about bringing democracy to Afghanistan.  I did not care what the future held for the citizens of this country.  I did not care if Afghans lived or died. I only cared about the safety of my brothers and finishing my tour in one piece. Apparently a ‘hearts and minds’ campaign could go both ways, but on this day, I’m not sure which side was winning.

Heath Hansen joined the U.S. Army in 2004, got orders to the 82nd Airborne Division, deployed to Afghanistan from 2005 to 2006, and deployed to Iraq from 2007 to 2008. He received the Combat Infantry Badge, Parachutist Badge, Australian Parachutist Wings, Operation Enduring Freedom Medal and Operation Iraqi Freedom Medal. After his military service, Heath graduated with a B.S. in Business- Financial Services from San Diego State University.