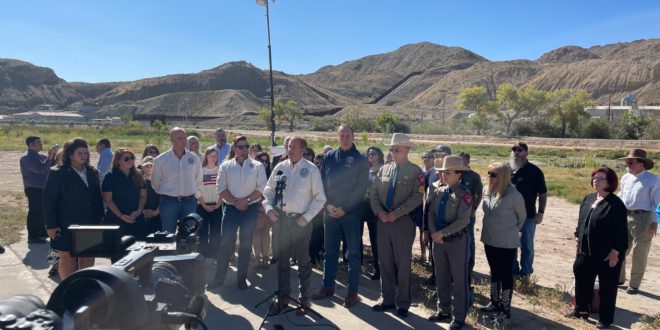 Biden to Governors’ Resistance Movement: Look, there is no federal solution. This gets solved at a state level

Governors have sued Biden for his federal Mandates and orders and have won. the Covid, supposedly de politicized has taken over all reason it seems.

Governor’s met remotely to discuss the situation, demanding that the issue cannot be taken out of their hands.

The Gist of the meeting:

Governors are getting pressure to do more, and the need is great to do more in terms of the rapid tests and the availability of it.  And so, one word of concern or encouragement for your team is that as the — as you look towards federal solutions that will help alleviate the challenge, make sure that we do not let federal solutions stand in the way of state solutions.

Biden: “Look, there is no federal solution.  This gets solved at a state level.  For the virtual meeting visit here

ICYMI: We WON! First, I won a suit against Biden for his failure to detain illegals. Now the full 5th Cir has sided with TX and put everything back on track! Biden is always flouting the law, but I’m holding him accountable.

The ‘Remain in Mexico’ program is a huge win for Texas! I will continue to fight to restore safety & order along our border, making sure that this program is implemented in full compliance with the court’s order.

Reinstating the “Remain in Mexico” program that Biden unlawfully rescinded will protect our Texas communities & slow the influx of illegal aliens & illicit drugs at the southern border.

Gov. Greg Abbott Dec 3. With the Remain in Mexico policy back in place, asylum-seekers will be sent from Texas border crossings to wait in Mexico. DHS will begin by sending back migrants from El Paso, Eagle Pass, Laredo & Brownsville. This results from legal action by Texas.

Great news for KY, OH & TN! The federal government can’t mandate that federal contractors receive #COVID vaccinations. I have sued the Biden Admin over this very same issue & will fight to ensure Texans are safeguarded from this unprecedented gov. overreach.

WE WON. Just this morning, citing “grave statutory and constitutional issues,” the 5th Circuit stayed the mandate. The fight is not over and I will never stop resisting this Admin’s unconstitutional overreach!

Attorney General Ken Paxton sued the Biden Administration today to stop its efforts to force federal contractors’ employees to choose between being vaccinated for COVID-19 against their will or risk losing their jobs. President Biden has previously admitted that the federal government does not have such authority, but now he seeks to impose this unprecedented expansion of federal power and encroachment upon individual liberty by forcing employers to require vaccine mandates as a condition of doing business with the federal government.

“The Biden Administration has repeatedly expressed its disdain for Americans who choose not to get a vaccine, and it has committed repeated and abusive federal overreach to force upon Americans something they do not want,” Attorney General Paxton said. “The federal government does not have the ability to strip individuals of their choice to get a vaccine or not. If the President thinks his patience is wearing thin, he is clearly underestimating the lack of patience from Texans whose rights he is infringing.”

And AG Paxton has a lot of co Plaintiffs:

“The Biden Administration will be liable for the damages caused by this unconstitutional and reckless vaccine mandate,” Attorney General Paxton said. “I will not allow the federal government to control the health and livelihoods of hard-working Americans by imposing ill-advised regulations on federal contractors.”

You can read the letter here.

Texas Attorney General Ken Paxton .@KenPaxtonTX has a message for Biden from the border: “Let’s Go Brandon. We’ll see you in court!”

Today I announced my 7th border related lawsuit against the Biden Administration in El Paso. Until they follow the law and get Texans the relief they desperately need, I will continue to file lawsuit after lawsuit. I will not back down

I will not sit idly by while this Administration wreaks more havoc on our state. This is my seventh border security and immigration related lawsuit against President Biden, and I won’t rest until Texas is safe from the disaster he created.

President Biden said, “I guess I should go” to the US-Mexico border, but that he hasn’t been able to find the time — despite spending at least part of 70 days in office collecting some R&R at one of his Delaware homes, NY Post reported.

“I’ve been there before and I haven’t — I mean, I know it well. I guess I should go down. But the whole point of it is I haven’t had a whole hell of a lot of time to get down,” he said.

Attorney General Ken Paxton announced that he is co-leading another lawsuit against the Biden Administration, with Missouri Attorney General Eric Schmitt, demanding that the federal government continue to build the border wall using funds that Congress has already appropriated for it. The Biden Administration broke the law when it stopped all efforts to complete the wall, even though Congress has designated several billion dollars to do so. The Department of Homeland Security’s termination of construction contracts is not only unlawful, but it goes against their own research that concluded that the border wall—actual physical barriers, not just border-security technology—is extraordinarily effective in controlling illegal immigration, drug trafficking, and all the costs that go with it.

“The Biden Administration’s flat refusal to use funds that have already been set aside by Congress to build the border wall is not only illegal and unconstitutional. It’s also wrong, and it leaves states like Texas and Missouri footing the bill,” said Attorney General Paxton said. “I will not sit idly by while this Administration wreaks more havoc on our state. This is my seventh border security and immigration related lawsuit against President Biden and his lawless executive agencies. I won’t rest until Texas is safe from the disaster he created and the disaster he continues to investigate.”

Attorney General Ken Paxton filed a motion to force the Biden Administration to reinstate Migrant Protection Protocols (MPP) after they blatantly ignored the court’s order to do so. MPP restricts illegal aliens’ ability to remain in the United States during immigration proceedings, which greatly reduces the burden shouldered by state and federal agencies tasked with defending our border.

“The Biden Administration’s refusal to follow the law has created chaos at our border. Our officers are working endlessly to try to manage the crisis that is overwhelming our state,” Attorney General Paxton said. “I have already sued this administration and won – yet they still think they are above the law and can continue shirking their responsibilities. It’s time to stop the Biden Administration from acting outside of federal law. They have created this crisis by inviting illegal aliens to come into our country unlawfully.”

Attorney General Ken Paxton and Missouri Attorney General Eric Schmitt today filed a lawsuit against the Biden Administration to reinstate the Migrant Protection Protocols (MPP) to curb the criminal and humanitarian crisis at the border. The MPP restricts illegal aliens’ ability to remain in the United States during immigration proceedings, which greatly reduces the burden shouldered by state and federal agencies tasked with defending our border.

“President Biden could immediately remedy the influx of crime pouring across our border by reinstating the Migrant Protection Protocols. Dangerous criminals are taking advantage of the lapse in law enforcement and it’s resulting in human trafficking, smuggling, a plethora of violent crimes, and a massive, unprecedented burden on state and federal programs for which taxpayers must foot the bill,” said Attorney General Paxton. “We cannot allow this lawlessness to destroy our communities any longer. President Biden must act.”

The MPP was enacted by President Trump in 2019 and applies “to aliens who have no legal entitlement to enter the United States but who depart from a third country and transit through Mexico to reach the United States land border.” The lawsuit argues that the Biden Administration’s unlawful halting of the MPP violated the Administrative Procedure Act and was an arbitrary and capricious agency action.

Read a copy of the lawsuit here.

Previous Christmas in the Field -Iraq / Afghanistan
Next The U.S. has gone soft and weak: Woke Culture and bowing down to Fauci tyranny