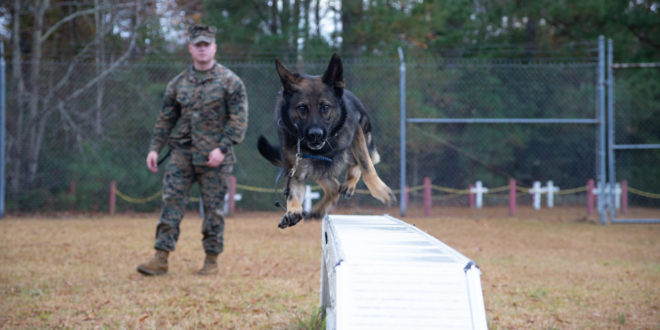 From detecting improvised explosive devices in Afghanistan to being on the front lines during World War I, military working dogs have been used to help service members win battles for generations.

“The K-9’s are trained with multiple specialties and they all have different capabilities,” said Cpl. Brendon Teague, military working dog handler with Headquarters and Headquarters Squadron. “They have the ability to search through buildings, find drugs, explosives and attack a fleeing suspect.”

Take the 2006 newly established MARSOC. and it’s Multi-Purpose Canine (MPC) unit. The multi-purpose canines’ core capabilities include explosives detection, tracking, and protection work. Along with maintaining these perishable and essential skills, the MPC program actively introduces additional training to the handlers and canines to meet the needs of the Marine Special Operations Teams (MSOT).

Not all Marines wear flak jackets and carry rifles; some have fur and walk on four legs. Military working dogs and their handlers are incredibly valuable members of the Marine Corps community and have extremely important jobs.

As a specialized search dog, Xxenos was trained to detect explosives off the leash and a certain distance away from his handler.

“They do this to maintain as much stand-off distance from the Marines to the explosive as possible,” said Master Sgt. Frank Ginn, the family readiness officer for Headquarters and Headquarters Squadron aboard Marine Corps Air Station Beaufort.

Dogs that are on a leash are usually only six feet form their handler which puts Marines in close proximity to the blast zone. Another lifesaving measure for MWD teams is communication.

“The SSDs wear a harness with a radio attached so their handlers can give them verbal commands when they are off-leash,” said Ginn. “They can also give hand and arm signals to the dogs.”

These handlers are trained to recognize tell-tale signs from the dogs if they detect something. During training, if the dog is following something that is not a threat, the handler will steer him away until he finds the explosives.

“The dog alerts the handler that he smells something there,” said Ginn. “It comes from a well-trained relationship between the dog and the handler. Xxenos was able to let his handler know when he found something so we could call (explosive ordnance disposal) in and detonate the charge, or mark the area and bypass it.”

In 2011, Xxenos went on his last deployment embedded with 2nd Marine Division. During that deployment, he and his handler found a total of 120 pounds of homemade explosives.

“I went out on patrols with him and his handler and slept in the dirt with them,” said Ginn. “One night we were coming back into our camp and our vehicle hit an improvised explosive device. We got out and set up security because we knew that there could be another explosive out there. Xxenos and his handler were in the vehicle behind us so they pushed out and the dog located another IED. If we had hit that one, the ending could have been very different. We all owe him our lives.”

The trust that a handler builds with his dog is the key to a well-functioning and effective team. A Marine has to be able to fully understand the signals his dog is giving and vice versa.

Xxenos was a Belgian Malinois, a dog breed that is known for having a good sense of smell and the ability to form strong bonds with humans. These traits made him perfect for the SSD program.

Just like humans who go through traumatic events during war, dogs can be affected by combat too. After his last deployment it became clear that Xxenos could no longer function in the field due to the high amounts of stress.

“He went through the adoption process and it worked out that I was looking for a dog at the time so he came home with me and became a part of my family,” said Ginn. “My bond with him grew stronger because of our history of deploying together. He was a true warrior to the end.”
Xxenos died of cancer surrounded by his loving family and brothers in arms.

“These working dogs are not a piece of gear,” said Ginn. “They’re living breathing animals with their own personalities who are part of the team. They are tough, smart, and they are Marines.”

As you get closer to a military working dog on Marine Corps Air Station Cherry Point, you’ll soon notice the words “DO NOT PET” stitched into their collar in bright yellow letters, and a handler not far away. As

It’s important to heed that warning because MWDs are trained to detect dangerous substances and attack on command.

Each military working dog at MCAS Cherry Point is issued a handler. However, being a MWD handler is no glamorous job. Not only is it competitive, but it requires a Marine who is willing to put in a lot of extra time and effort.

U.S. Marine Corps Cpl. Kaleb Aikens is one of those handlers. When he first enlisted, Aikens’ goal was to become a military police officer. However, when the opportunity arose to work with dogs in a military setting, Aikens knew he needed to take advantage of the opportunity.

“When I got to military police school, it was asked who all wanted to go to Lackland Air Force Base for the handler course,” Aikens said. “I knew that was what I wanted in my career.”

“Not a lot of people get to do it, but it was definitely the most challenging thing I’ve done so far.”

While at MCAS Cherry Point, Aikens has worked with Staff Sgt. Jenna Cauble, who brings years of experience to the kennel. Cauble currently serves as the trainer of the K-9 unit, where her job is to supervise and ensure all handlers and dogs are proficient.

One thing Cauble notes is Aikens has fully immersed himself into building a bond with his dog, Rudy. He’s regularly seen at the kennel on his days off, working with his dog since they were paired together. Forming a bond is essential to train the dogs to listen to their handler’s voice.

“Aikens is the newest handler we have but he puts a lot of work into it,” Cauble said. “He’s progressed a lot from the start to right now and he’s gonna keep progressing. His confidence is way higher than it was when it comes to detection problems and patrol.”

Looking ahead, Aikens hopes to improve his skills.

“What makes me the most passionate is the challenge,” Aikens said. “It’s always possible to change when you are working with another living thing. It’s different every day, you never know what to expect. I love that.”

Previous Dozens of Christians, killed in South Sudan, 71 Protestors in Sudan
Next Ballad of the Green Beret: Dolly Parton

North Korea Launches Another Missile After US Imposes New Sanctions