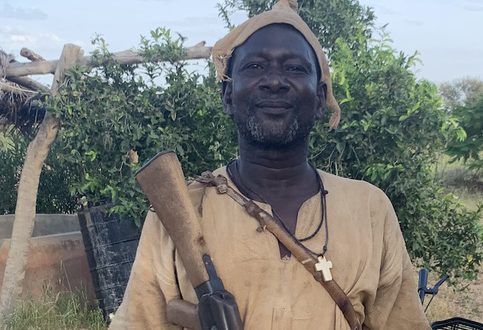 KAYA, Burkina Faso— Kibsa Ouedraogo is proud of the wooden idols that declare his animist faith. The entrance to his home is guarded by large figures carved from dark wood. At their feet are a few empty bottles of tequila left as offerings.

Inside Ouedraogo’s modest sitting room is a wide array of antique traditional furniture, including a “divan,” (a kind of couch) ornate chairs and an antique headrest. This room has its share of icons, too — mostly humanoid and a few clearly animal inspired. A few of the latter grin back at the visitor through gritted animal teeth.

The room signals that Ouedraogo is a chief of local importance. The AK-47 on one of the tables, a radio and shotgun shells are evidence of his other position — overall commander of the Volunteers for the Defense of the Fatherland for the north-central region of Burkina Faso.

The VDP — the abbreviation for the militia group in French, Burkina Faso’s official language — was formed by the government in 2020 to help defend rural communities from terrorism, though for some, it is a controversial organization.

“When I started with the VDP, I (was) a prominent person, so the terrorists were looking for me, but I am blessed,” Kibsa Ouedraogo said with a smile toward his idols.

The country of 21 million attracted headlines recently when it became the latest in a series of West African coups that have brought soldiers to power. This is not the first time that Burkina Faso has experienced the “rule of khaki.” A popular uprising in 2015 toppled Blaise Compaoré, an army officer who had ruled the country for 27 years after seizing power in a military coup. In turn, Thomas Sankara, often remembered as a sort of “African Che Guevara,” had seized power himself in a military coup in 1983.

I visited Ouedraogo late last year in his home in Kaya and joined him on a visit to a VDP drill. Preparing for my visit, I came across an old U.S. embassy release from 2014 in which the U.S. ambassador is said to have visited Kaya’s military base, where the U.S. was involved in training a “frontier brigade.” The release was written just months before Blaise Compaoré was toppled in a popular revolt. Today, Kaya and its environs are considered too dangerous for many Western diplomats to visit — let alone the U.S. ambassador.

The town of 200,000 is just a two-hour drive from the capital, but the north-central region is now one of the most dangerous in the country, as many analysts note that Burkina Faso’s insurgency continues to spread southward.

Joining Ouedraogo on a visit to a VDP post, we first drove past the army base where the U.S. ambassador once visited. An anti-aircraft gun sits pointed menacingly toward the road.

Ouedraogo is jovial and likes to crack jokes.

Yet, when passing burned-out vehicles from a previous terrorist attack, he turned serious and quiet.

The story of Abdoul Ouedraogo, Kaya Ouedraogo’s assistant, is also a microcosm of the war’s complexity. The two men share the same last name but are only distantly related. Abdoul’s family left Kaya when it was still the French colony of Upper Volta and moved to Airbinda, a town roughly 120 miles away. Abdoul’s Muslim prayer rug under his arm and skull cap denote that he is just as observant of his faith as Kibsa is of his.

Airbinda is largely a ghost town, Abdoul said. Thousands of residents fled the bustling village located on the edge of the Sahara to avoid frequent terrorist attacks.

These are just some of the 1.5 million internally displaced persons generated by the conflict since 2013. Abdoul is a municipal official, and in de facto exile, he still collects a salary.

The former citizens of his small village still seek him out to request his stamp of approval on marriage certificates and similar life events.

The VDP Camp, North of Kaya

The hot Saharan sun was high in the sky when Kibsa Ouedraogo arrived to review the VDP unit.

“Looking good, looking good,” Ouedraogo said to the men lined up in a single row in front of his inspection. He took time to greet each one before allowing the formation to retreat into the shade of some nearby trees.

The sergeant in charge of the formation wears a brown tunic and fitted brown cap identifying him as a member of traditional mystical brotherhoods of hunters known as the Dozos, which date to at least the 13th century. Dozos can be found in Mali, the Ivory Coast and Burkina Faso.

Dozos are so distinctive to the region that they feature on a Burkinabe government website to promote tourism in the country. The site notes that Dozos can train for up to three years and that their training means they often have access to a great deal of knowledge concerning the “art of hunting, natural medicine, mysterious powers, shapeshifting (and) invulnerability to weapons.”

In the 19th century, many Dozos fought against French colonial rule. The fact that Dozo hunters are armed means that they are often hired as guards. Inevitably, they have found themselves involved in West African civil wars, most notably in the Ivory Coast.

Many Dozos are self-declared animists. Others are Muslims, and a few are Christians. A few at the VDP camp said they had conducted rituals to make themselves immune to bullets. Not everyone in the VDP was a member of the Dozos, and only a few wore their distinctive brown tunics.

“If I am in danger in combat, I throw this at the enemies, and when it breaks open, they will be weakened as if stung with bees,” said one of the VDP soldiers. His comrades smiled at him as he held up a small protective gourd.

In the current conflict, the VDP have been accused of human rights violations. A Voice of America report released last month suggests that a number of VDP units with Dozo members are responsible for such crimes when operating outside the company of mainline Burkinabe forces

A key theme in the reports is the conclusion that the creation of the VDP will institute interethnic conflict or a larger civil war — in particular between the Fulani, who tend to be Muslim pastoralists, and other ethnic groups such as Foulse, Gourmantche and Mossi. The Mossi are the largest ethnic group and by some accounts make up 52% of the country — though in some parts of Burkina Faso, VDP units include Fulani members.

This is a legitimate concern, but much of the reporting neglects to mention that communities started arming themselves prior to the creation of the VDP. The country has a long tradition of such militias and paramilitary groups, especially in times of crisis, as the existence of the Dozos suggests. In my time in Burkina Faso, I didn’t meet anyone who had a complaint against the VDP — they were simply seen as the country’s minutemen responding to a threat.

“Jihadists just want to control people to compel them to perform rituals and live according to their single vision,” said one Muslim member of the VDP, seemingly in defiance of the Quranic injunction against compulsion in religion.

Kibsa Ouedraogo, with a mixture of Patton-esque swagger and good-natured back slapping, addressed the men for a few minutes under a tree, offering words of encouragement before turning them over to the local Dozo leader for dismissal.

Each village receives the equivalent of 300 euros for organizing a VDP unit. Each member completes two weeks of military training and acts as an irregular force in support of the nation’s struggle against terrorism. In addition to working as guards, many VDP members are deployed as scouts at the forefront of larger military efforts.

Without the heavier weapons or vehicles of their army comrades, many VDP units have suffered significant losses in combating terrorist forces. Ouedraogo sees the matter of human rights violations as a question of character. The local VDP commander vets each soldier for his reputation and would not bring someone into a unit if he was suspect, Ouedraogo said.

As the drill broke up, the sun was still high. Ouedraogo decided to visit a nearby local village, where he is considered a chief, before returning to Kaya. The densely packed village seemed like the perfect place to ambush a high-profile person, but here, he carried his AK-47 only as an afterthought.

After strolling through the main track and shaking a number of hands, he stopped to visit a noble family that had fallen on hard times. Traditionally responsible for the land where the VDP camp is located, the family’s matriarch was no longer able to stand or sit up. Her attendants carried her into the mud-walled courtyard, where Ouedraogo humbly stooped and pressed a few West African francs into her hand.

He sat for a moment to exchange some pleasantries before leaving. At the entrance to the compound, he passed another animist statue placed protectively in front of the house of this noble family.

“Once a French man — he came here,” Ouedraogo said. “He bought one of these. He took it from the land.

“For him, it was just a piece of art,” he continued, shaking his head. “And you know what? He died from coronavirus.”

Joseph Hammond is a former Fulbright fellow and journalist who has reported extensively from Africa, Eurasia and the Middle East.