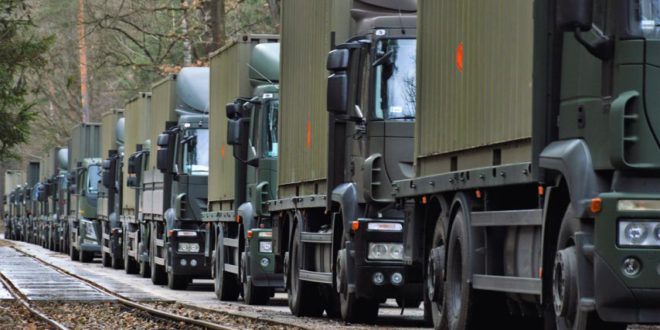 Poland MOD: Ammo to Ukraine, Troops On the ready

The convoy with the ammunition that we provided to Ukraine has already reached our neighbors. We support Ukrainians, we stand in solidarity with Ukraine and we firmly oppose Russian aggression.i

The ????????troops have been on high alert for several weeks due to the tense situation in the????????. The Polish Armed Forces are monitoring the situation. I have introduced another level of readiness in dedicated units. This is standard course of action to keep the Armed Forces ready.

More than 12,000 ???????? soldiers are on duty at the ???????? border. We’ve raised the state of readiness Polish Territorial Defence Forces @terytorialsi. Together with the services of the ???????? Ministry of the Interior and Administration, we are prepared to defend the Polish???????? border.

Russia’s attack on Ukraine and the security situation in our region were the main topic of yesterday’s telephone conversation between the minister @mblaszczak with Florence Parly, the Minister of Defence of France

Minister @mblaszczak talked about the situation in Ukraine with the heads of defense ministries of the Bucharest 9 format #B9 #NATO. Ministers also talked to the US Secretary of Defense ???????? @SecDef L. Austin, who attended a meeting devoted to the Russian aggression.

Hundreds of thousands of Ukrainians have fled into Poland since 2014. Over 100,000 have fled in the last few days and the UN https://www.unhcr.org/en-us/poland.htmlreports that there are 2 million Ukrainian Refugee in Poland. Poland is the biggest country in Central Europe. Its borders with Ukraine and Belarus are the European Union’s external borders.

Meanwhile, NATO bit off more than it expected in attempting to justify its existence as it continued its gradual moves towards Russian borders: Poland MOD retweeted:

[email protected]·Feb 23I strongly condemn #Russia’s reckless attack on #Ukraine, which puts at risk countless civilian lives. This is a grave breach of international law & a serious threat to Euro-Atlantic security. #NATO Allies will meet to address Russia’s renewed aggression.

This is a brutal act of war. Our thoughts are with the brave people of #Ukraine???????? and we call on Russia to immediately cease its military action

United States has been supporting Poland leading up to the Russian Invasion. The latest meeting with SecDef as Poland reports:

Secretary of Defence also announced the commencement of the next stage in the process of purchasing Abrams tanks by Poland.

“We are also the partners in developing Poland defence capabilities. Poland has chosen F35 fight aircrafts, Patriot air defence batteries and and missile systems. Today, I am proud to announce another step in this growing partnership. In response to Poland’s formal request in July of 2021, Secretary Blinken and I have relayed our intent to Congress to offer Poland the opportunity to acquire 250 M1A2 Abrams main battle tanks. The timeframe for delivery of the tanks is currently under discussion. This is the most modern version of the Abrams and  will provide Poland with highly advanced tank  capability. It also strengthen our interoperability with the Polish Armed Forces. Boosting the credibility of our combined deterrence efforts and those with other NATO allies” – the US Secretary of Defence said.

“Poland’s purchase of Abrams M1A2 tanks will help ensure a fairer distribution of the responsibilities within the alliance, all in the name of our collective defence. This is an extremely important strengthening of our defence capabilities and one of the most important armaments contracts in the history of Poland” –  said Minister M. Błaszczak.