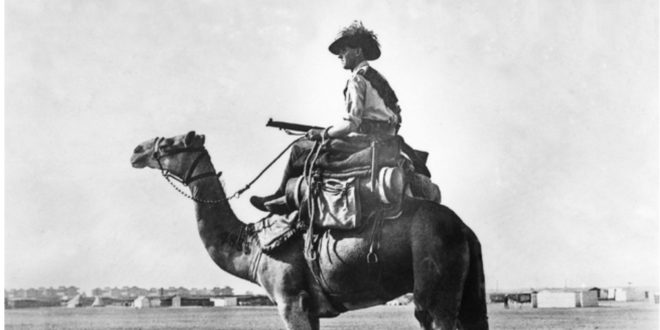 Rebirth of The Imperial Camel Corps??

The cameliers of the Imperial Camel Corps would ride their mounts to the scene of the action but once there they were expected to dismount and fight on foot – as infantrymen.

The four-man group was the smallest level of organisation in the camel companies. At first, when in battle one trooper from this group was expected to stay behind and guard the four camels while the other three went into action. This was the drill used in the horse-mounted infantry units then in Egypt.

However in practice the troopers found the camels were a lot easier to control than horses once they were barraked (made to kneel down). They were also much less prone to panicking when exposed to enemy artillery and small-arms fire. Therefore it soon became normal procedure for one man to look after 12 or even 16 camels once they were barraked.

This meant that the actual fighting strength of an Imperial Camel Corps company was usually only a few troopers short of the total strength of the company (184 officers and men).

Camels, like horses, have been used in warfare for centuries. Their ability to carry heavy loads and go for days without water made them ideally suited for patrol and transport work during the desert campaigns of the First World War.

Camels could be stubborn creatures, and would occasionally stampede and attack people. In general, though, the fighting cameliers seem to have gained a genuine admiration and affection for their humped companions.

The first recorded use of camels in battle occurred more than two and a half thousand years ago when the Persian emperor Cyrus the Great used them in his victory over the Lydians at the Battle of Thymbra in 547 BC.

Since then camels have often fulfilled the role of cavalry on the battlefields of the Middle East and adjacent regions, including during the Sinai and Palestine campaigns of the First World War.

Formation of the Imperial Camel Corps

The Imperial Camel Corps was formed in early 1916 to assist with fighting against the Senussi, an Islamist movement supported by many of the Arab and Berber tribes of the Libyan-Egyptian border area.

In late 1915 the Senussi, with Ottoman backing, had attacked British and Egyptian border outposts and threatened nearby coastal towns. By March 1916 the British had successfully crushed the bulk of the Senussi forces, but it was clear that ongoing monitoring of this largely neglected frontier desert region would be required. This was to be the task of the Imperial Camel Corps.

The Corps had been established in January 1916. After two months of training at the Camel Training Depot at Abassia, the first four camel companies were sent out to patrol the Libyan Desert to re-assert British control of the border and watch for any signs of renewed unrest.

These camel companies were intended to be fighting units and their ranks were filled via drafts of Australian infantrymen; some were Gallipoli veterans, others reinforcements yet to see action. Camels were used to transport the soldiers to the scene of the action, but once there they would dismount and fight on foot as infantrymen.

Expansion of the Corps

The manner in which the Imperial Camel Corps was intended to fight was very similar to that of the New Zealand Mounted Rifles, Australian Light Horse and British Yeomanry regiments already in the Middle East. More reinforcements for these horse-mounted units arrived in the first part of 1916 than could readily be absorbed. The British commander of the newly named ‘Egyptian Expeditionary Force’, General Sir Archibald Murray, took advantage of the situation by sanctioning the transfer of these excess reinforcements to strengthen and expand the Imperial Camel Corps.

In March 1916 six new camel companies were raised from British Yeomanry regiments and in June a further four companies made up of Australian Light Horse reinforcements were added to the Corps.

The reason for this expansion was the British decision to launch a major offensive that year to drive the Ottoman Turks out of the Sinai Peninsula – in other words the British Army now intended to fight its way across the Sinai Desert.

The original Imperial Camel Corps companies had already proven their worth in the Libyan Desert against the Senussi so there was every reason to think that they would be just as useful in a similar role in the Sinai against the Turks.

In addition to their normal tasks of carrying out long-range desert patrols, the fighting in the Sinai occasionally required the Imperial Camel Corps to take part in major battles and actions. In the course of this fighting the camel companies were sometimes formed into ad hoc battalions by grouping four companies together.

This experience led to a decision to formally re-organise the Imperial Camel Corps into a brigade formation with standing battalions in December 1916. By this time the campaign in the Sinai was drawing to a close and the campaign in Palestine was beginning in earnest.

It was at this point that the two New Zealand camel companies took their place in the Imperial Camel Corps.

After extensive training the New Zealand cameliers joined the 1st and 2nd battalions, plus a number of other Imperial Camel Corps companies, at El Mazaar oasis in the Sinai in December 1916. On 19 December they were formally grouped into a single brigade made up of three camel battalions – the Imperial Camel Corps Brigade. In addition to the existing camel battalions, the Brigade included the newly raised 3rd Battalion to which No 15 (New Zealand) Company was initially assigned. The Camel Brigade’s baptism of fire came a mere four days later when it took part in the Battle of Magdhaba.

About the same time No 16 (New Zealand) Company – formed only five weeks earlier in November 1916 – began to carry out its first long-range patrols in the Sinai Desert. As the railway and water pipeline that sustained the main body of the Egyptian Expeditionary Force was extended across the northern Sinai, the patrols undertaken by the Camel Corps companies fanned out far to the south and south-east, protecting these vital strategic assets against the possibility of Ottoman raid or attack.

These patrols were mostly carried out at section level (about 30 men) and it was rare for a complete company to go on one, although isolated Ottoman outposts located by these patrols were occasionally the target of company-strength raids.

The withdrawal of all Ottoman outposts from the Sinai Peninsula after the annihilation of their garrison at Rafa in January 1917 removed the main threat to the British lines of communication across the Sinai. In response to this development, and the intensification of fighting around Gaza in southern Palestine, the remaining camel companies patrolling the Sinai, including No 16 (New Zealand) Company, were taken off those duties and formed into the Imperial Camel Corps Brigade’s fourth (‘Anzac’) battalion in May 1917.

The addition of the 4th Battalion allowed the Brigade to have one battalion rotating through the Camel Brigade’s Training Depot at Abbassia for rest and refitting while maintaining a strength of three battalions in the field.

For the rest of 1917 the New Zealand, Australian and British cameliers fought against the Ottoman Turks, first in Palestine proper, and then from early 1918 in the Jordan Valley. During a re-organisation of the Brigade in August 1917 No 15 (New Zealand) Company was transferred from the 3rd Battalion to the 4th Battalion, bringing the two New Zealand camel companies together in the same battalion for the first time. For a deeper dive visit NZ MOD

Previous SecDef Austin Fully Jabbed has COVID, experiencing symptoms
Next 6 January Witch Hunt, Pelosi, Cheney Probe Wants to Know Why Trump Did Not Try to Call It Off