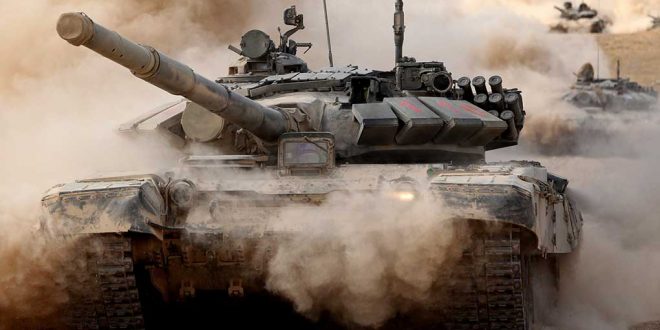 Russia reportedly has lost more than 650 tanks and about 3,000 other armored vehicles and heavy equipment so far in its invasion of Ukraine. Experts put the losses down to the advanced anti-tank weapons given to Ukraine by Western countries, poor strategy, low morale, and important design flaws.

While it is impossible to obtain comprehensive reports on military equipment that has been destroyed, abandoned, or seized in Russia’s invasion of Ukraine, evidence circulating on social media and messaging services can provide some insights into the situation on the ground.

Ukraine says Russia has lost almost 1,200 tanks, a number that has not been independently verified. However, the military and intelligence blog Oryx, which counts Russian military equipment losses in Ukraine based on photographs sent from the front lines, says Russia has lost 664 tanks (as of May 13, 2022) and about 3,000 other armored vehicles and heavy equipment so far.

Out of the 664 tanks that Russia has lost in Ukraine, 283 were abandoned or captured. According to military analysts, that says a lot about the operation: Poor intelligence led to Russian commanding officers not being able to plan their offensive operations properly, and the core of military personnel consists mostly of conscripts — around 80 percent — who are not professionally trained to use the equipment.

The invading forces were also expecting Ukrainians to receive them with open arms, which, as we know, did not happen, and the high number of casualties in the opening days and weeks of the invasion has affected the morale of Russian troops, who often fled their positions, leaving the equipment behind.

In fact, so much Russian military equipment was left abandoned that Ukrainian authorities even declared that anyone who took possession of such equipment did not need to declare it for tax purposes.

Amateur videos of Russian tanks and other armored vehicles being towed across fields and villages by Ukrainian tractors regularly go viral on social media. The military vehicles are usually abandoned, broken down, or out of fuel. They are often handed over to Ukrainian armed forces battling Russia’s invasion.

As for the equipment that was lost in combat, the war in Ukraine has exposed fundamental design flaws and outdated or inferior-quality materials in Russian equipment:

Tank turrets that were blown off and now lie in ruins several meters from the rubble of the exploded tank point to a design issue known as the “Jack-in-the-box” flaw.

Many Russian tanks, including the T-72, which has been widely used in Russia’s invasion of Ukraine, have an automated “hold and load” ammunition system. Shells are placed in a ring within the turret, and more ammunition is stored underneath the tank operators. So, when an enemy shot hits a vulnerable spot — such as the top part of the tank, where the armor is thinner — the ring of ammunition can explode and start a chain reaction that vaporizes the crew and blasts the turret off the tank’s hull.

Russian tanks such as the T-72, T-80, and T-90 have an automated “hold and load” ammunition system, and carry multiple shells in a ring within their turrets, and underneath the operators.

These units are designed to attack quickly with a lot of firepower, so they are made up of many armored vehicles, but few infantry troops offer protection to escort and retaliate if the armored column comes under attack.

Russian units can cause a lot of damage, but effective Ukrainian tactics paired with anti-tank weapons provided by the West have dealt Russia a massive blow.

Anti-Tank Weapons Given To Ukraine By Western Countries

Other weapons have proven highly effective against Russian equipment. The Turkish-made Bayraktar TB2 drone has unique capabilities to detect and identify targets from a distance of up to 50 kilometers.

So far, more than 30 countries have provided financial and military aid to Ukraine. Supplies have been limited to arms, ammunition, and defensive equipment like anti-tank and anti-aircraft systems, as NATO members fear that providing heavier offensive equipment such as fighter jets could lead to a direct conflict with Russia.

Before invading Ukraine, the Russian Army built a reputation for being strong, effective, and technologically advanced, namely through its involvement in the Syrian war. But in this new theater of war, the Ukrainian Army, despite being outnumbered more than 5-to-1, has put a serious dent in that reputation.