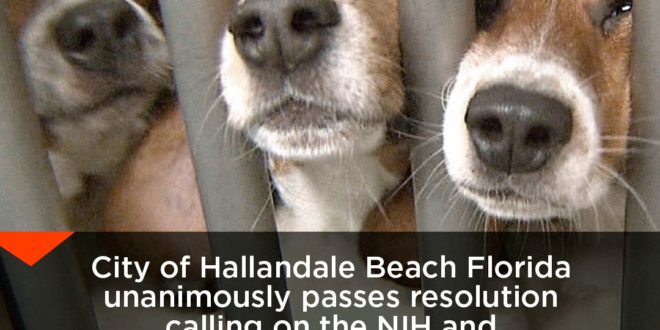 In collaboration with Beagle Freedom Project the City of Hallandale Beach, Florida, unanimously passed a resolution calling on the NIH and Dr. Anthony Fauci to immediately stop funding any research that uses animals.

Dr., Sen. Rand Paul is on a mission: to end mandates on brutal animal testing

FDA Modernization Act, would end a mandate that experimental drugs be tested on animals.

“To me, it sounds more like torture than research,” Sen. @RandPaul on the taxpayer-funded Beagle experiment headed by Dr. Fauci. @EmeraldRobinson. “Dr. Fauci’s division at the National Institutes of Health @NIH wasted over $424,000 on deadly and unnecessary experiments on beagles.”

Dr. Anthony Fauci’s division of the National Institutes of Health (NIH) funded an experiment at Kansas State University, involving hundreds of ticks feasting on puppies, which were injected with a mutant bacteria, alive Brietbart reported.

Incredibly, after Sen Rand Paul attacked Fauci’s Gain of function research, the NIH deleted its related definition of Gain of Function in October 2021.

NIH did admit : that NIH is still funding Ecohealth collaboration with Wuhan thru 2025.  Fauci has publicly stated his support for Continuing US taxpayer funding of Wuhan.

HHS Deputy admits Fauci’s NIH funded gain-of-function research in Wuhan but says it was “an unexpected result.” If the experiment combines unknown viruses and tests their ability to infect and damage humanized cells, of course the result is ‘unknown’ before the experiment, Sen Paul said.

Animal rights group want to stop the torture of animal generally, although experiment on animals has been conducted for decades.

Those in defense of Fauci do not deny such testing was conducted on animals in other countries, but claim that Dr. Fauci was not involved.

“BFP has shared no misinformation. The NIH conducts brutal experiments on animals. Dr. Fauci is accountable because he is the Director of the NIAID, a division of the NIH that consistently funds cruel research on animals. It is all online and easy to find: https://reporter.nih.gov Beagle Freedom Project said.

In collaboration with Beagle Freedom Project the City of Hallandale Beach, Florida, unanimously passed a resolution calling on the NIH and Dr. Anthony Fauci to immediately stop funding any research that uses animals.

Conflicting information is out there, but the Gain of Function research is the real problem. The bottom line is that Dr Paul and others accuse Fauci of lying to Congress, which results in his statements being under attack.