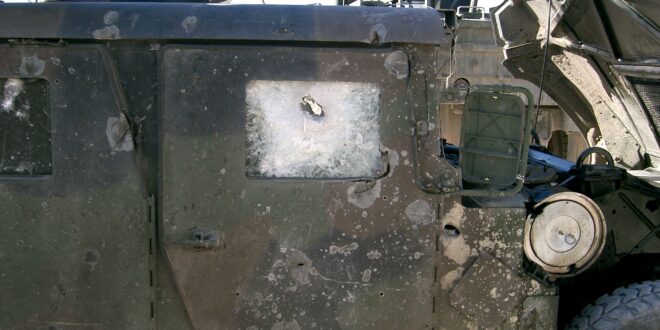 Note from the author: The following is all from my perspective and how I remember it. Any inaccuracies are on me.

I often get asked, “What was the most dangerous mission you went on?” My reply: “Logpack to FOB Warhorse.”

Baqubah in 2004-05 was not a pleasant place to be. A small city of around 500K Northeast of Baghdad. It was at one time a stronghold of Baath loyalist and radical Sunni militias with some Mahdi Army and AQI thrown in. I never knew who I was shooting at unless we took prisoners, which rarely occurred in my platoon. As no quarter was given or asked for, which is the only thing savages understand.

My platoon lived at the Diyala provincial police headquarters in lovely downtown Baqubah. Which was also the location of the city jail. We lived on the second deck with the first deck being occupied by police offices, duty rooms etc. We did not have a DFAC, only a small room with coolers for beverages and a fridge for cold cuts. Every day a squad would be assigned to go to FOB Warhorse to get mail and hot chow in mermite cans. It was also a chance to go to the PX to pick up a copy of Soldier of Fortune. No matter how hot the AO got, I never missed an issue.

The enemy studied our convoy routes, and with only two main MSRs to Warhorse, they would emplace IEDs along the Main Supply Routes (MSRs) going through the city and at chokepoints and traffic circles. Depending on the route they would also engage with small arms and RPGs. We would take different routes and sometimes double back, go down alleys etc. Odds were, you would probably take some form of contact on these missions. In Baqubah it wasn’t if, but when you’d see combat.

It was three days before my 34th birthday, and I woke up to an outgoing fire mission from FOB Gabe. It had been a busy summer with heavy fighting going on in the city between coalition and insurgent forces. I ate a quick breakfast, prepped my weapons and gear, and hit the weights. My squad leader told me to be ready at 1500 to go to Warhorse.

We did our usual briefing, and my team was assigned the supply trailer, and would be the second vehicle. I took the gunner position and readied my M249 to go outside the wire. It was a sunny afternoon with clear skies and not too hot for Iraq in September. Our route would take us through Mufrek Circle, AKA the Circle of Death, with a straight shot to Warhorse, a trip of about eight miles as the crow flies. Traffic was light which was unusual for that time of day. I was extra alert standing high in my turret and scanning for threats. Being the number two vehicle, I had to watch both flanks.

Making it through the circle without incident, we picked up the pace to 45 MPH. Driving through a police checkpoint that oddly was abandoned. As we proceeded up the MSR there was no traffic to be seen.

As I was scanning, I noticed a blue plastic 5-gallon jug that the locals would use at their improvised gas stations on the right side. My vehicle passed it.

As I was swinging my turret to cover some residential buildings, I heard a loud Whump! And a Crack! It was powerful enough that I felt the overpressure from the blast.  As I turned, all I could see was thick black smoke and some flames but no vehicle.

I shouted down to my TC: “IED! IED! VEHICLE THREE IS HIT!”

Then, almost in slow motion the vehicle comes out of the smoke looking like a Lovecraftian monster. Belching smoke with fluids running out underneath, it kept rolling along. I noticed the turret was unmanned and spinning freely. The armored glass looked like milk; shattered pieces of armor were falling off the doors. It didn’t look good for the crew from my vantage point.

We slowed down to allow the vehicle to catch up and provide security and check on the crew. One side of the road was palm groves with the other being a residential neighborhood that was not coalition friendly.

The damaged vehicle stopped, and the rear passenger door opened.

Cpt. Edwan exited the vehicle with blackish smoke billowing out behind him, coughing and gagging. He staggered a few steps, shook his head, and started to issue contradictory orders. “If it fucking moves kill it!” he orders me.

Realizing he is out of it from the blast, I yell to him: “You’re an Officer! Fucking act it…….sir!”

He runs over to me, and I can see his eyes going in different directions.

I grab my rifle and CLS bag (Combat Lifesaver), and check Cpt. Edwan out. He is bleeding heavily from his nose. I treat the bleeding and check him for other injuries. Then put him in my vehicle and tell him to stay put.

The gunner of the vehicle, Sgt. Foote, was hit bad by shrapnel in his side. I slipped a bandage under his arm checking him for other injuries. He was shaking very badly, and I was worried about shock setting in. I escorted him to the lead vehicle, and told another CLS to monitor him for shock and check for any wounds I may have missed.

My squad leader, SSgt. Legere, was also helping with treating casualties. He was walking Sgt.Maguire and SPC. Fuller to my vehicle to check them out.

I went around to assist the driver, SPC Houston, who had taken glass to his eyes and was temporarily blinded.

The inside of the vehicle was trashed with oil and other fluids dripping down from where it had sprayed up on the overhead. There were water bottles, ammo and other gear scattered all over the interior. The smell of burning rubber, oil and raw sewage was heavy in the air. It was difficult to breathe as I assisted Houston out of the vehicle. I led him towards my vehicle and had him lay down so I could rinse his eyes. And hopefully prevent permanent damage.

While in the middle of doing that, I spotted a sedan racing at us. Not in the mood to fuck around, I placed myself in front of Houston yelling “Car!!!” and engaged the vehicle with my rifle, shattering the windshield.

The driver locked the brakes, did a 180 that would make Hollywood proud, and sped off back towards town.

I helped Houston into my vehicle and checked the other wounded for shock and any injuries that might have been missed.

During this time sensitive items were being removed from the damaged vehicle in preparation to either tow it or abandon it. It had gotten eerily quiet after engaging the vehicle. There wasn’t a soul in sight, which is odd as locals would normally come out to take pictures or gawk. I had a feeling we were about to get hit again by an insurgent cell. Which was not good with only six men able to fight effectively. I took up a position to cover my squad leader as he finished up removing sensitive items.

Out of the corner of my eye I spotted a U.S. patrol headed our way. I let my squad leader know, and the word was passed. The patrol was a welcome sight, as we were down five men in an open area with only six men able to fight.

My elation was short-lived however, as out stepped Old Stinkeye in all his glory. Perfect uniform, not a hair out of place, and wearing enough gear to make a Tactifool envious.

My DCUs were covered with oil, blood, and transmission fluid and who knows what else. I pretty much looked like a used maxi-pad. Stinkeye gives me a look of disgust and orders me to roll my sleeves down. And proceeds to start chewing people out for uniform violations and one of our wounded for smoking a butt in a vehicle.

Don’t get me wrong. There is a time and a place for that. A hostile area with five WIAs is not the place for garrison bullshit. To his credit, Stinkeye did have his vehicles form a perimeter around our stricken vehicle. I changed my position to cover the palm grove using the trailer as cover, while the lead vehicle crew works to hook up chains to tow the wrecked vehicle to Warhorse.

All along, Stinkeye is bitching to Cpt. Pearson about how unsoldierly we looked. And that our wounded didn’t look that badly hurt.

Overhearing that, something inside me snapped.

Looking around to make sure no one was looking, I take my safety off and yell: “CONTACT! THREE  O’CLOCK!” and start shooting into some heavy brush.

Stinkeye, like a Sally, panics and starts leg lifting to his vehicle, not even bothering to maybe draw his pistol and act like a leader. He dives inside and gets on the radio, probably calling in a TIC (Troops in Contact).

I direct a nearby gunner and dismounts to watch the palm grove to keep up my charade. While this was happening, vehicle three was ready to be towed.

Stinkeye opens his door and tells us all to mount up and he’ll escort us to Warhorse.

Breathing a sigh of relief, I get into my turret, and we are Oscar Mike. I continued to monitor the casualties as we proceed down the MSR.

Captain Pearson informs us we will proceed right to the aid station and not clear weapons at the FOB gate.

At the gate, Stinkeye is supervising his soldiers at the clearing barrels. We just roll on by. I can hear him yelling to stop or else we’ll be in trouble. In our defense there were clearing barrels everywhere on a FOB, so it wasn’t that big of a deal.

Our first-rate medical personnel were waiting outside as we rolled up. They quickly helped to triage and get the wounded into the aid station. Due to my appearance they tried to haul me in too! I then had the grim task of filling out casualty cards for my friends. It was emotionally taxing filling out a card for a guy you were smoking and joking with just prior to the mission.

Stinkeye shows up and starts his bullshit about not clearing weapons at the gate. The doctor in charge comes out and reminds him that wounded have priority over everything else including petty rules. And orders him to leave, as he is upsetting the wounded. And he will make sure weapons are clear and safe.

Like a child he stomps off to probably cry to the Brigade Commander.

After doing paperwork I was told go get some chow. Which due to my appearance is another story for another day.

All five soldiers recovered and returned to duty to finish the deployment. I never once complained about chow while deployed. And would always tell those who bitched, that people have gotten hurt and almost killed to bring hot chow for us to enjoy. It’s the little things in life, remember that.

Greg Chabot served in Iraq 2004-2005. He is a freelance writer living in New Hampshire. He frequently contributes to Soldier of Fortune.

Previous Agilite K19 Plate Carrier: A Perfect Fit for Behind Enemy Lines
Next Russian Troops Ordered to Retreat From Parts of Kherson