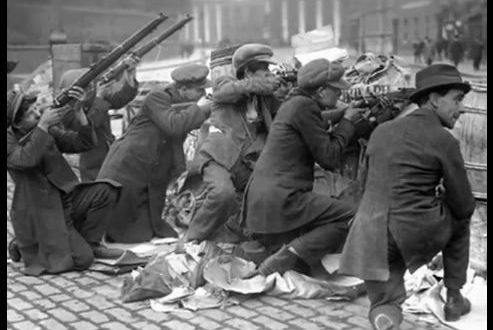 Rebels during the 1916 Easter Rising in Dublin, Ireland

In Dublin, Ireland, on Easter Monday, 1916, nationalists proclaimed the establishment of the Irish Republic. Along with some 1,600 followers, they staged a rebellion against the British government in Ireland.

During the Easter Rising, the rebels seized prominent buildings in Dublin, including the General Post Office, and clashed with British troops. Within a week, the insurrection had been suppressed and more than 2,000 people were dead or injured. The leaders of the rebellion soon were executed – and some escaped.

One of the rebels, American-born Eamon de Valera, was sentenced to death. He served only a brief prison term, and went on to become one of Ireland’s leading political figures, with a career spanning half a century.

The executed leaders were hailed as martyrs. In 1921, a treaty was signed that in 1922 established the Irish Free State, leading to the modern-day Republic of Ireland.