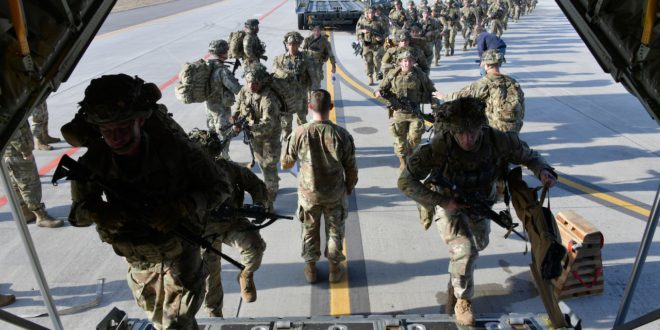 DOD officials estimate that almost 75 percent of the forces that Russian President Vladimir Putin amassed for invasion are now in Ukraine.

A senior defense official also said the United States has not seen anything specific as a result of Putin putting Russian nuclear deterrence forces on high alert. The official, speaking on background, said DOD will continue to monitor the situation. There is no change to U.S. nuclear defense posture, he said. “We remain comfortable and confident in our own strategic deterrence posture,” he said.

Before the invasion five days ago, officials estimated that Russia had more than 160,000 troops along its borders with Ukraine and inside Belarus, also along the border with Ukraine. If the estimate of 75 percent is correct, then 120,000 Russian troops are taking part in the invasion.

Ukrainians continue their David vs. Goliath battle against the Russian invaders. The official said that Russia has, thus far, failed to achieve air superiority over Ukraine. “The airspace over Ukraine remains contested,” he said. “Ukrainian air defenses remain intact and viable, both in terms of aircraft and missile defense systems, and they’re engaged.”

Ukrainian ground forces have slowed the Russian advance on the capital city of Kyiv and Ukraine’s second city of Kharkiv. Still, Russian forces are roughly 25 kilometers out of Kyiv. The official said this appears to be the Russian’s main line of effort.

There have been roughly 380 ballistic and cruise missile launches against Ukraine, the official said.

Despite news reports, U.S. officials have seen no indications that Belarussian troops are being readied to move into Ukraine. “Our best information is that the forces inside Ukraine are all Russians,” the senior official said.

The Ukrainian resistance and Russian military problems with logistics and sustainment have combined to slow the Russian invasion. “Our indications are that they ended up having to rely on fuel and sustainment capabilities earlier in the process than what we believe they had planned to,” the official said. “So, on day four, they’re running out of gas, and they’re having logistics problems.”

Added to this is Ukrainian resistance, including disabling a major bridge, which has worked in Ukraine’s favor.

Russia seems to be trying to encircle Kharkiv and Kyiv. Kharkiv is the scene of heavy fighting. Russian units have not taken the city but appear intent on encircling it.

The same tactic appears to be in play in Kyiv. “We believe that they want to be able to approach Kyiv from multiple directions and put pressure on Ukrainian defenses, all around Kyiv,” the official said.

The official said Ukrainians have proven “very creative in how they are … resisting.”

“We talked about the combined arms capabilities of the Russians,” the official said. “The Ukrainians have proved pretty effective with their own combined arms approach. … It varies from place to place based on where the Ukrainians are, and how fast they can get there and what they have at their disposal, but they are using pretty much everything that they have in their arsenal from small arms all the way up to surface-to-air missiles to try to slow down the Russians.”