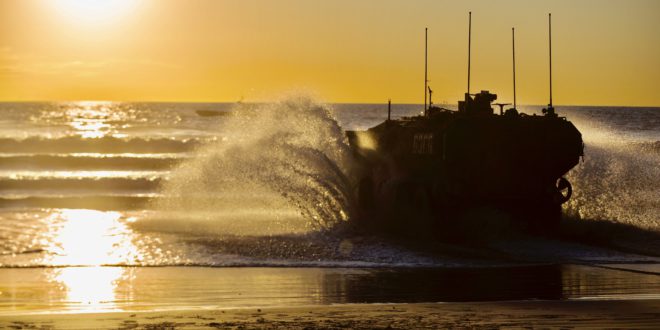 N.C. -- Taking on the surf and creating massive waves of their own, Marines with 1st Platoon, Bravo Company, 2nd Assault Amphibian Battalion, conducted a series of amphibious operations including embarking, debarking and beach assaults on Onslow Beach at Marine Corps Base Camp Lejeune, North Carolina, Aug. 17, 2015.

In September 2021, the Marine Corps suspended ACV operations in unprotected waters while it worked to resolve the towing issues that were identified in several after action reports from the field.

“Amphibious operations, including the use of amphibious ship-to-shore connectors, is a foundational aspect of Marine Corps operations and is critical to the future force and its ability to remain the Nation’s premier expeditionary force in readiness,” said Lt. Gen. David Furness, Deputy Commandant for Plans, Policies, and Operations.

Once equipped with and trained to employ the new tow rope solution, units are authorized to utilize the ACV to conduct unrestricted amphibious operations, including self-recovery operations in the open ocean and through the surf zone.

Prior to the receipt and installation of the new replacement tow ropes, ACV operation remains restricted to land mobility, gunnery operations, and amphibious operations in protected waters.

In addition to the new equipment and training requirements are the 18 tasks that units must complete, validate, and certify prior to the resumption of waterborne operations. These tasks stem from the comprehensive investigation into the facts and circumstances surrounding the July 2020 AAV tragedy

The Navy has expedited the movement of assets to recover the remains of the Marines and Sailor, as well as raise the AAV. The equipment to properly and safely perform the recovery from the sea floor will be in place at the end of this week, and a dignified transfer of our Marines and Sailor will occur as soon as possible after the conclusion of recovery operations.

The AAV sunk to a depth of approximately 385 feet after taking on water during a shore-to-ship maneuver approximately 1,500 meters off the coast of San Clemente Island. One Marine was pronounced dead at the scene, and seven missing Marines and one Sailor were subsequently presumed dead August 2 as search and rescue efforts ceased.

“The Navy and Marine Corps learned from this tragedy and we are codifying the lessons we have learned as an organization so that the deaths of these Marines and Sailor are not in vain,” said Vice Adm. Roy Kitchener, Commander, Naval Surface Force, U.S. Pacific Fleet. “We are reworking procedures and doctrine, clarifying aspects of amphibious operations, and instituting new training requirements to prevent future tragedies.”

The tasks cover a variety of requirements including: ensuring training and qualifications for crew and embarked personnel are properly equipped; vehicles have passed required inspections; and operations are conducted with safety boats, sea state assessments, and positive communication.

The AAV has been in service for more than 40 years and many of its components and parts are obsolete and are no longer being manufactured. Because of this, the vehicles are becoming increasingly costly and difficult to maintain. That, along with the changing environment in which Marines are expected to fight, has produced a need for a combat vehicle that can maneuver the ground combat element in any terrain.

The ACV will be an eight-wheeled vehicle that will provide protection akin to the Mine-Resistant Ambush Protected vehicles with landward maneuverability and mobility that is superior to that of the AAV. The ACV will also be outfitted with a precision weapons station, which will provide significant enhanced lethality, and will have a robust swim capability, allowing it to operate within the littorals.

The vehicle will go through substantial testing to determine its ability to protect Marines, the accuracy of its weapons, ease of repair and whether it will meet the requirements for survivability and reliability.  Ultimately, the Marine Corps will choose one vehicle to go into production.