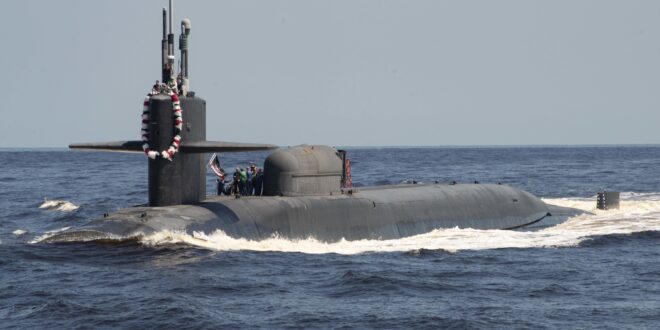 ‘I Should Have Worried About Dying’: That Time We Crashed the Nuclear Submarine

by Tim Patterson, The War Horse
In the moments immediately after the collision—after an alarm had sounded at 2 a.m.; after the boat had rocked violently to starboard, rolling 45 degrees and back again; after many of USS Philadelphia’s sailors were thrown from their beds; after a DVD player had flown across the wardroom and hit me in the face; after Jeremy Novotney had started shouting from one of the Officers’ staterooms, “What the fuck! What the fuck!”; and after I saw Rob Barnett take off running toward the engine room, hoping the nuclear reactor hadn’t been damaged—after all of this, maybe I should have worried about dying, but instead, I grinned.

I’d spent most of the last three months—June, July, and August, 2005—underwater, living 24/7 inside Philly’s compact steel hull with 135 sailors, exhausting myself over paperwork, sleeping little, and dodging the Executive Officer as much as possible. Every day I woke up with a weight on my shoulders. I’d never gotten along well with the leadership on the Philly; perhaps that was my fault.

The paperwork got to me more than most, but it might have been tolerable had I not hated the Executive Officer. I thought of him as a raging micromanager who invented arbitrary tasks, trusted no one, and took no interest in developing his subordinates. I dreaded running into him or the Captain in the passageway. I avoided meals in the Officer’s wardroom, or waited to eat until after they’d finished. It took a toll on my sanity—the expectation of subservience, the pointless memos, the daily stress of trying to avoid their spotlight—and inside a submarine, away from the sun for months on end, sanity was hard to come by.

The night of Sept. 4, I waited inside Philadelphia’s control room as the boat surfaced in the Persian Gulf. I climbed to the bridge when it was my time to take watch and took a long look out at the horizon, scanning for other ships, relishing the first fresh air I’d breathed in a month. That evening the horizon was marked only by distant lights, sandwiched between a moonless sky and a black ocean. For the next three hours, I drove a leisurely 7 knots toward Bahrain.

At midnight, another Officer came to the bridge and relieved me. I descended two ladders to the Officer’s wardroom, where the cooks were serving midnight rations. Gladiator was in the DVD player. Russell Crowe shouted at the crowd, “Are you not entertained?” I ate a slice of pizza and passed out on the blue faux leather bench.

I bolted upright to the shouts of Tom McDermott, one of the more experienced Lieutenants on Philly.

As my vision came into focus, he turned and disappeared. My Timex watch read 2 a.m. Half asleep, I looked around the wardroom. The 7MC speaker crackled with the voice of Chief Jason Vega Cruz, spitting out words.

The collision alarm sounded. Shit. And then I felt the boom.

The far side of the wardroom rose up as the entire submarine rolled, and gravity pressed me hard against the bench and wall. Cabinets burst open. A DVD player and a Nintendo flew at me at eye level. I couldn’t move fast enough; the DVD player hit me in the face. The rolling suddenly reversed and then stopped violently. The submarine remained tilting 18 degrees to starboard. The roller coaster had lasted maybe four seconds. I stood up, leaning on the wall for balance.

Suddenly the boredom and monotony of the last three months were disrupted. It didn’t dawn on me until later that I had a job to do, or until even later that we might have been in mortal danger. My only thought was that bosses wouldn’t shine their spotlight on me, not today.

In the passageway, I ran into Rob Barnett, who’d been on the toilet when the collision happened.

“Who’s in maneuvering!?” we both asked.

My mind raced, hoping the answer was someone capable of operating the nuclear reactor in a life-or-death emergency. We shouted the name simultaneously.

Mike Falkner was one of the newest Officers on the submarine. A smart guy, but in this moment we needed someone experienced. Rob turned and ran.

Curiosity drew me to the control room. My route took me past the Captain’s door, where I saw Novotney was already inside the stateroom. Shit! My job! As Philly’s Damage Control Assistant, I was supposed to get to the Captain’s stateroom, set up DC Central, and direct emergency response teams. In my absence, Novotney had started to do my job. Seeing me arrive, he thrust a headset at me and ran off.

I listened to the first damage reports from throughout the submarine: There was water in the torpedo and fan rooms. One of the electricians reported a pool of water in the athwartships passageway. Small amounts of water had spilled everywhere, but no outside ocean water had flooded in. Damage reports slowed down after the initial 10-minute rush.

News spread quickly that a 52,000-ton Turkish merchant ship, the M/V Yaso Aysen, had slammed into Philadelphia’s side and gotten wedged on top of us. The two vessels sat roughly perpendicular, with Philly’s rudder stuck on the far side of Yaso Aysen’s hull. With neither vessel able to use propulsion, we drifted.

Turning to the navigator next to me, I asked, “Do you know what’s funny, Nav?” It didn’t occur to me then to keep my mouth shut; he must have been worried about his job. I repeated the question.

“Shut up, Patterson. Nothing is funny.” But he didn’t dampen my mood, and I kept grinning. For the next two hours, I kept DC Central running as we drifted toward shoal water.

In the post-collision chaos, some of Philly’s Officers had taken the initiative to run to spaces where they could help. Sometime between 2 and 3 a.m., Tom McDermott climbed to the bridge to deliver a flashlight to help see whether Philly was sinking.

Minutes later, his voice crackled over the 7MC loudspeaker: “Control, bridge, Lieutenant McDermott has the deck and the conn.” Tom’s voice sent a wave of relief throughout Philadelphia’s crew, and I breathed deeply.

In the outside air, Tom could see the hull of the Yaso Aysen towering over us. He watched powerlessly as Philadelphia’s fairwater plane widened a hole in the merchant’s hull. The sound was like an awful car crash, like metal tearing, he described later.

As the merchant took on water, she gradually pushed Philly deeper. Every few minutes, it seemed, the digital depth gauge in Philly’s control room ticked off another foot, and the open bridge hatch inched closer to the water.

Tom hastily constructed a plan: Flood Philadelphia’s aft ballast tanks to sink the submarine’s stern deeper to give us just enough room to pull Philly’s rudder out from under the merchant ship. The only problem was that we weren’t certain the ballast tank vent valves would open; and if they did, we weren’t positive they would shut again.

Up on the bridge, Tom thought about something he’d said on the previous deployment, a sort of premonition: “This boat is gonna kill me. I’m gonna die in this motherfucker.”

In DC Central, I listened with apprehension as Tom gave the orders. Some of Philly’s mechanics stood nervously by the vent valves in the engine room, waiting for something to go wrong. But the valves worked. The ballast tanks flooded like they were supposed to. Seconds later, Philly drove out from under the merchant. After two tense hours, the separation came easily.

I waited a minute for someone to tell me what to do. The navigator had long since departed DC Central, so I was alone. Emergency reports from around the ship had stopped. I glanced into the control room, but no one paid me any attention.

I packed up my headphones and stuck them back in their cubbyhole. I hadn’t slept more than two hours that night; the thrill and exhaustion were getting to me. In my mind, the crash was already long behind us. I walked to the wardroom to grab a mug of coffee and breakfast.

Editors Note: This article first appeared on The War Horse, an award-winning nonprofit news organization educating the public on military service. Subscribe to their newsletter.