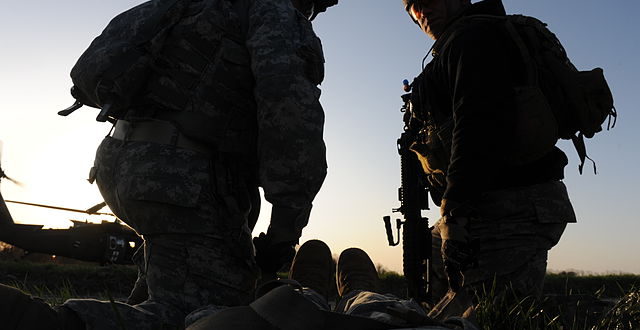 ‘We Don’t Have Funerals in Combat Zones’: A Soldier Remembers

In my three wars I witnessed some sad things, but one of the saddest I have seen was the moral disintegration of a U.S. Army company at Al, Iraq in September 2005.

We were the corps security brigade. Our mission was straightforward and massive: patrol and secure the MSR’s – all of them – from Kuwait to Turkey and westward to Jordan, and provide convoy escort for everything that rolled along them. Our three assigned battalions (two armored and one infantry) and our cavalry troop had all been remounted to up-armored humvees. However, because of the scale of the operation and sheer number of highway miles we were tasked to secure, we ended up collecting several additional units as well, typically ones with no immediate purpose in the fight. These included a battalion of “Stinger” air-defenders (who were excellent!) and a Quartermaster company, all of whom were meant to conduct mounted combat patrols in support of our mission.

In a war where there were no safe areas and support soldiers were getting hit as hard as the trigger pullers, it had become politically popular for the Army at home to insist that ALL soldiers were combat soldiers first, and whatever their primary MOS, second. That sounds great, and it works for the Marines, but they train their people to think that way from the beginning.

Soldiers have a different recruiting and training dynamic that didn’t easily allow for simply a wand-wave and “Poof! You’re a grunt!” Yet, there we were with a company of soldiers trained to run warehouses and load trucks who were suddenly expected to pick up rifles, jump into humvees, and defend those trucks against IED’s. It did not go well… not even a little bit.

It was, in fact, a disaster. Within weeks of their attachment the Quartermaster company had begun taking serious casualties and morale was plummeting. Soldiers were on the edge of mutiny, and every first sergeant, sergeant major, and officer that could be spared from across the brigade that was ordered to Al Asad to provide them direction and backbone.

I had spent the previous eight months in Basra with the British-led Multi-National Division (South East) as their “U.S. Arresting Officer” facilitating getting their detainees into our less legally constrained American custody for interrogation. It was fascinating work, but not exactly directly connected to our main mission of convoy and MSR security. Accordingly, I soon found myself unceremoniously dumped on the tarmac at Al Asad with no idea what I was actually in for.

So: “No shit, there I was! Standing on the ramp with all my gear, weapon in hand, and sweatin’ like a whore in church,” wishing nothing more than a cot somewhere to sort myself out. Presently a humvee arrived to fetch me. After confirmation that I was indeed the droid they were looking for, the captain in the passenger seat rather unceremoniously told me to get in.

“Lock and load, Sir! Convoy hit at the gate. We’re going out.”

My eyes went wide. This was not normal. But war is all about the not normal. The captain told me the convoy had departed less than an hour ago and gotten schwacked just outside the gate. He thought there might be casualties but had no details. He just knew that all available vehicles were ordered to converge at the site to help.

We rolled up on what remained of the convoy just outside the outer gate. The main body had already left, detaching a few humvees to provide security and calling for reinforcements before they left. It was all wrong. Soldiers were just sort of numbly standing around, some of them smoking, none of them had weapons ready, much less providing perimeter security. Nobody knew who was in charge or what was going on, other than that they were waiting for MEDEVAC. After a brief conversation, the captain started getting the troops into security positions while I went forward to the attack site.

The IED had blown up just under the humvee’s right-front wheel, taking off that entire quarter of the vehicle forward of the windshield. A collection of soldiers was squatted down, obviously working, just outside the corresponding door. As I approached, I started involuntarily sneering as my olfactories and taste buds reacted to the stench of blood and shit in the air.

The soldier lying on the ground was quiet as the others worked on him. They didn’t really have much to work on. Below the waist he was just mush with no beginning or end… just mush attenuating into strings and bone fragments. No noticeable blood flow, just seepage. If he wasn’t already gone, he was very shortly afterwards.

After a while – time didn’t really register – an ambulance arrived. They rolled the half-man onto a stretcher and took him away. That was the last we saw of him.

The next day the Quartermaster company was shattered. Completely non-functional. We stood the company down and quietly replaced every NCO and officer with our own people from the brigade, all except for their First Sergeant. She was solid and was probably the only thing that had held them together up to that point. All my life I had read of units breaking under fire but never really understood how that could happen, or what that might mean. I now know precisely how that happens, and what that means, and I hope to never see such a thing in my life again.

After a couple of days for recovery, we gathered the company together for a memorial. Funerals are for families back at the soldier’s home. We, the “battle buddies,” have our own ceremonies.

When a battle is over, the first concern is for the living, for safety and security, and for the will and resources to fight again if we need to. But as things return to “normal”, as we begin to feel more secure, we eventually have a time when we gather to mourn our dead.

The basic elements are almost always the same. Of course, there was no casket or body. That was almost immediately evacuated. Instead, a pair of boots, a rifle with its bayonet pointed down between the boots and its butt-end towards the sky. A set of ID tags, “dog tags,” are laced over the pistol grip of the rifle, and our comrade’s helmet on top.

We formed up in front of this totem. Words were spoken, memories were shared. The focus was on continuing the fight and recovering, because we had to.

Finally, the First Sergeant called us to attention and began the roll call. She started with the names of several soldiers ahead of our fallen friend, apparently friends who knew him. They answered, “Here, First Sergeant!” She continued alphabetically until the dreaded moment when she got to the dead man.

She called the last name. No response.

After a moment she called the last name again, and the first name. No response.

She called a third time, with the rank, last name, and first name. No response.

The First Sergeant then gently recited the man’s full rank and name, and announced, “Killed in Action, al Anbar, Iraq” and the date. It was final.

Without command, we broke formation and lined up to pay our last respects at the totem. There were slow salutes, a silent prayer or two. Some knelt and touched the totem. Some completely broke down. All private and personal moments.

And then we filed out and began escorting convoys again.

But we never forgot.