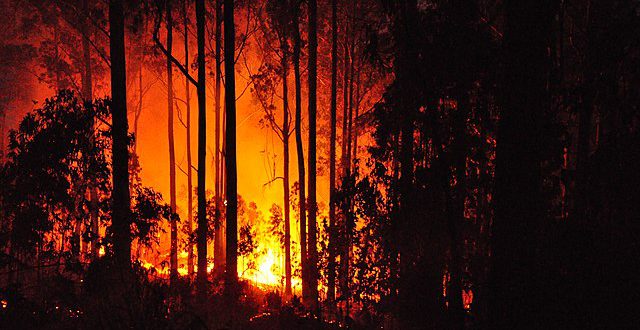 Wildfires are a familiar summer scene in Portugal.

As lonely Portuguese firewatchers look for smoke atop stands on distant hills, and fire fighters battle the blazes that have raged across the country, the Iberrian nation faces its worst wildfires in five years.

Even as the struggle continues, though, many recall the events of 2017 – which, in addition to destroying millions of dollars in property and costing 66 lives, also served as a distraction for a bold group of robbers who stole munitions including grenades and high explosives from a Portuguese military base in a brazen heist.

At some point, during the height of the fires that raged from June to October, a group of thieves are believed to have infiltrated a Portuguese military facility at Tancos. The military base is located 60 miles north-east of Lisbon in an area home to an airfield, parachute school, and base for a military engineering unit.

Though the robbery was not discovered until June 28, it was thought to have occurred days earlier, when Portuguese soldiers from the Tancos area joined in fire-fighting efforts. In all, more that 1,000 firefighters across Portugal battled the blaze between June 17-24.

The thieves cut a hole in a fence and retrieved anti-tank grenades, plastic explosives and more than 1,400 rounds of ammunition.

“The Prime Minister went to holidays in Spain for vacation when he came back he stood with a general and said that all of what was stolen had been set for destruction and had already been deactivated,” said João Rebelo, a member of Portugal’s parliament with the CDS – People’s Party, in a 2017 interview. “No one believes that story.”

The President of Portugal called for a no-holds investigation and raised the possibility it was linked to heists at other NATO facilities though it is unclear what incident he was referring to.

“They could have stolen grenade launchers and larger ordnance if they had wanted, there was nothing to stop them,” said Rebelo, who sits on various defence related committees.

The fact that some of the larger munitions were not taken caused some to note that weapons such as tear gas grenades and anti-tank mines could also be of use to sophisticated bank robbers who knew that the base’s CCTV cameras were not working, and the base was unguarded.

“I think there is a good chance this was a book-keeping error that the base knew about for some time,” said a Portuguese security official who declined to speak on the record about the incident.

The official conceded that the robbery was one of the largest security incidents for Portugal in 2017, along with a cyber-attack on several government ministries that originated in China.

The robbery occurred only a few weeks before the Barcelona terrorist attack of 2017, which left 24 people dead including eight suspected terrorists. This raised heightened concerns that the stolen weapons would be used in a terrorist attack.

Some suggested that the robbery was an inside job.

Earlier this year, trials for some 23 people involved in the robbery ended with only 11 convictions. Most but not all of the weapons were recovered.

The trial reached into the highest levels of the Portuguese government, and eventually led to resignations and prosecutions. It also revealed that an inside source had provided information about security, the location of the various weapons, and surveillance patrols.

That trail began on October 2017, not far from Lisbon.

In September 2018 came the arrests of six officials. The following month, the Minister of National Defence José Alberto Azeredo Lopes was arrested.

Lopes has denied any involvement in the cover up; and, despite being accused at the trial of the crime of abuse of power, he was acquitted.

Despite the convictions, questions linger for many in Portugal. Online many have asked, was the Tancos heist the work of a criminal gang seeking to conduct an armed robbery? An intelligence operation gone afoul? Or a criminal conspiracy involving corruption within the Portuguese government? Whatever the case, many important details likely went up in smoke in 2017.

Previous ‘The Taliban Are Behind My Door’: The Whispered Message From a Friend in Afghanistan
Next Surrounded by Taliban: War Correspondent Hollie McKay’s Harrowing Tale From Afghanistan