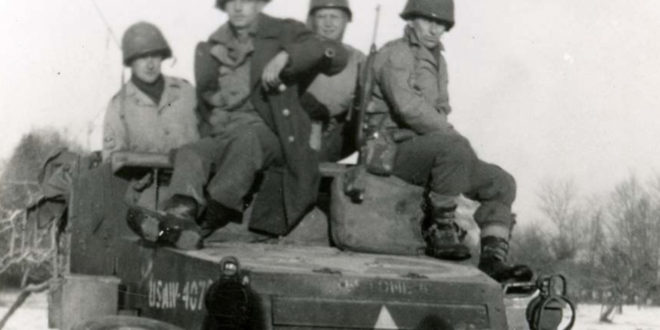 Four American soldiers riding on a half-track during the Battle of the Bulge. Gift of John J. Janik Family, WWII museum

Shortly after its initial liberation from an almost four-year nightmare by American forces in September 1944, the Grand-Duchy of Luxembourg soon thereafter became a rest and recreation and billeting area for numerous US units that badly needed a respite from combat operations. Thousands of GIs were temporarily stationed or transferred to Luxembourg to rest, restore their morale, allow them some free time, and enjoy hospitality from grateful Luxembourgers, all while their decimated units were being rebuilt by a steady stream of reinforcements arriving from the United States. Their equipment was brought up to snuff again, and their combat readiness was reconstituted during that time. The grateful nation of Luxembourg, newly liberated from Nazi oppression, warmly welcomed its American liberators. Needless to say, all the GIs greatly appreciated this spontaneous demonstration of genuine gratitude despite the language barrier—to them Luxembourg soon became the “paradise for weary troops.”

A fair number of those US troops were stationed in the north and east of the country bordering with Germany, where they were billeted in many Luxembourg farming villages and small towns. A number of different units rotated through the area during the war. Around November 20, 1944, battle-fatigued troops from the 28th US Infantry “Keystone” Division arrived from the area south of Aachen, where they had experienced a considerable number of casualties in the bloody and costly battle of the Huertgen Forest. They moved into positions and quarters that had been occupied by units that preceded them along the Luxembourg-German border overlooking the Our river. They were actually facing the “Westwall” or “Siegfried line.”

As they were now billeted again primarily in villages, rather than in uncomfortable and often leaking tents, there was frequent contact between American GIs and the local villagers. Despite language problems, the locals were happy to host their “American liberators” and went out of their way to make American soldiers’ stay as pleasant as possible by inviting the them into private homes, volunteering to assist the GIs with things such as clothes repair, and offering the Americans local food and drinks. With the US liberation of Luxembourg, a bit of American culture and “lifestyle” came to Luxembourg. The music that was “forbidden” for four painful years was soon heard from gramophone records, played everywhere by the GIs during their off-duty hours! Baseball became omnipresent and numerous farmer boys soon learned how to handle a bat. In addition, US food products, primarily canned food, the so-called “C” ration cans that numerous GIs gave to the villagers in exchange for small services such as “laundry washing,” rapidly gained popularity. Food products like corned beef, vegetable hash, potato flakes, spaghetti and meatballs in tomato sauce, dehydrated powdered eggs, soluble coffee—you name it—brands like Spam, Kellogg’s, and Pilchards soon found their way to locals’ tables as easy-to-make supplementary food. Of course, the ubiquitous chewing gum and “Hershey” bars were cherished by the village children. Chocolate and chewing gum, by the way, became the first two words of English even toddlers picked up very quickly.

Although in late fall of 1944 there were no more combat actions in northern Luxembourg, the understrength units of the 28th Infantry Division held a thin line of defense and were always on the alert. The reconnaissance patrols tried to collect information on the enemy situation across the border, marked by the Our river. Occasionally at night enemy artillery fired a few rounds into US-held Luxembourg territory, which were usually answered by American guns. From time-to-time patrols clashed with each other and bursts of automatic weapons could be heard. But all in all, it was very quiet in late November of 1944, which added to the general and overall belief that the war would end soon.

The end of November customarily marks the Thanksgiving holiday in the United States, and to the GIs in Europe, thousands of miles away from home, the news that the traditional turkey dinner would take place “on the frontline” became a powerful morale booster and a sentimental bridge to their loved ones back home! For their Luxembourg hosts and friends, this was something totally new, never seen, never experienced before in the country. The villagers could hardly believe their eyes when GMC trucks pulled up and mess sergeants distributed live, or frozen, turkeys to the various mess halls and field kitchens, along with cans of cranberry jelly, flaked potatoes for mash, and other ingredients. All day long the “chefs” were frying turkeys in their gasoline-operated field stoves and the smell of freshly-cooked turkey soon filled the air! The hungry GIs enjoyed their turkey dinner and servings as prepared in the local units’ field kitchens. They ate their traditional “Thanksgiving Dinner” out of their mess kits in tents or in the barns. They entertained the Luxembourg families and villagers and got themselves “entertained,” for example with “Quetsch,” a strong local booze distilled from plums. Truly, a piece of home in the GI mess kits on the frontline, provided by Uncle Sam.

Front-line artists toured the villages and gave barn or jeep shows, playing guitar, singing and playing the newest musical records from the United States. Occasionally, larger tents were put up for front-line movie theaters and many village boys “sneaked in” to watch “Wild West” movies. In larger towns, the USO shows entertained the soldiers—it was announced that Marlene Dietrich would make an appearance in December of 1944. Again, all of those recreational activities, while still on the alert, gave hope for a rapid end to the war, as everyone gradually adopted the mood of the approaching end-of-the-year festivities…perhaps a Christmas in peace. The “ghost front” around Thanksgiving Day was quiet—very quiet, indeed!

for the full story

To commemorate Thanksgiving, we asked our friend Roland Gaul to write about the unique experience that American GIs and Luxembourg civilians shared during November of 1944. Gaul has been involved with the Museum since we began leading our own educational tours of battlefields across the world, and the The National Museum of Military History Museum, which he helped establish was one of the highlights of that, and subsequent visits to the Ardennes.