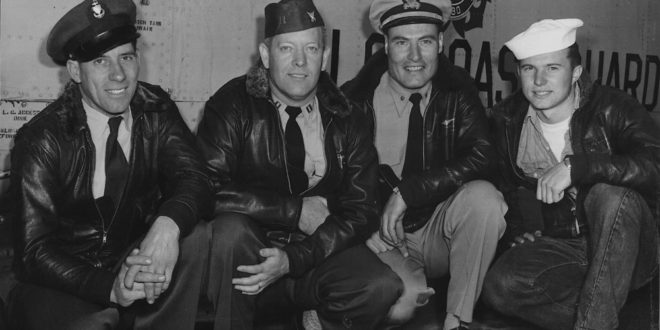 At 12:04 a.m., on Dec. 24, 1955, a levee on California’s Feather River collapsed loosing a 21-foot wall of water into Yuba City and surrounding farmlands. That day before Christmas, flood victims huddled on rooftops and clinging to tree branches could hear something in the distance that few had heard before. The throbbing noise grew louder as a Coast Guard helicopter arrived to rescue the flood’s survivors.

Based at Coast Guard Air Station San Francisco, the helicopter was a newly-developed HO4S-3G. Considered by many as the service’s first effective rotary-wing rescue platform, this helicopter far exceeded the capabilities of Coast Guard helicopters used since World War II. It was capable of carrying its crew as well as large groups of passengers in an enclosed cabin. Standard equipment included a rescue hoist capable of lifting 400 pounds and a rescue basket. In addition, the HO4S-3G was the first Coast Guard helicopter equipped for nighttime use, an essential feature for rescue operations.

Over a 12-hour period, this Coast Guard aircrew worked in shifts of two, one pilot and one crewmember, to avoid exhaustion. Pfeiffer, the more experienced pilot and qualified for night flight, began the search operation in darkness. Skimming low over flooded housetops, he flew between trees, high-tension power lines and telephone wires locating survivors with the aid of a searchlight operated by Accamo. The flood victims, most dressed in bed clothes or not at all, were lifted from rooftops where they had clung to chimneys or television antennas. Others were trapped in trees and on car-tops.

In his first rescue, Pfeiffer flew over a rooftop where a mother was clutching her children. He brought the helicopter into a close hover and Accamo lowered the basket. It was the start of a routine that repeated itself throughout the night and through the next day. During this routine, the crew would fill the helicopter cabin with survivors, rush to the local airport situated on high ground, safely deposit their load of survivors, and then rush back to rescue the next batch of victims.

Just before daybreak, Pfeiffer took one last trip before Thometz took over. Pfeiffer had learned from a rescued man that the man’s paralyzed wife was trapped in their flooded mobile home. Pfeiffer took-off immediately with both Accamo and Roulund aboard, even though they had been flying with just one pilot and one crewmember at a time. This time, two crewmembers were needed, one on the ground to get the woman and another in the HO4S-3G to hoist the basket.

Pfeiffer arrived on scene and put the helicopter into a hover over the partially submerged and, by now, floating mobile home. Accamo lowered Roulund in a basket to the roof. Using an ax he brought with him, Roulund chopped a hole in the roof and found the paralyzed woman floating on a mattress in the bedroom. Roulund calmed her and then carried her in muddy waist-deep water through the flooded home and out the front door. He then stood in the floodwaters and signaled the helicopter with his flashlight. Accamo lowered the basket, Roulund put the woman in it and Accamo completed the hoist. Accamo lowered it again and Roulund came up. On another rescue, equipped with a stretcher, Accamo jumped from the helicopter to the roof of a house and brought aboard a polio-stricken woman.

With daylight, Thometz made his first flight and rescued 15 children from the top floor of a house. Later, he recounted “We just kept lowering the basket and bringing them up. Then we went back and picked up their six fathers.” The two pilots alternated pilot duties throughout the rest of the day. Working with Accamo as his hoist operator, Pfeiffer made 75 rescues. Working with Rouland as his hoist operator, Thometz made 63 rescues. Thometz later recounted his trickiest pick-up was hoisting a survivor from a stepladder.

Flying without co-pilots, both Pfeiffer and Thometz grew weary from the strain of tension-filled flying and accumulated hours. When Pfeiffer landed at Air Station San Francisco the night of the 24th, his left hand and arm were badly swollen and he limped on his left leg. The constant hand shifting of the helicopter’s collective and cyclic controls and ceaseless adjusting for helicopter torque by pushing on rudder petals caused these ailments. Both Accamo and Rouland had knees rubbed raw from hoisting duties and lacerated hands from the constant extracting, lifting, and pulling victims from the rescue basket into the helicopter cabin.

Using the HO4S-3G, the Coast Guard aviators saved 138 men, women and children, including disabled victims requiring added assistance. Their helicopter was never shut down and had to be “hot-fueled” while the engine was running. Besides the flood’s devastation, the fact that it occurred during Christmas drew the attention of a nation. The flood rescue was covered in Look, Life, Newsweek and Time magazines and it made the front page of the New York Times on December 25th.

At the time of the Yuba City Flood, there was still a debate within the service whether the fixed-wing seaplanes or the rotary-wing helicopters were better suited for rescue operations. Amazingly, one helicopter and four outstanding aircrewmen changed the course of Coast Guard aviation from fixed-wing aircraft to rotary winged. By 1960, the helicopter was well on its way to becoming the primary rescue vehicle for the service.

For their expert airmanship and performance of duty, George Thometz, Henry Pfeiffer, Joseph Accamo and Victor Roulund were awarded the Distinguished Flying Cross. These four men are among the many distinguished aviators of the long blue line.