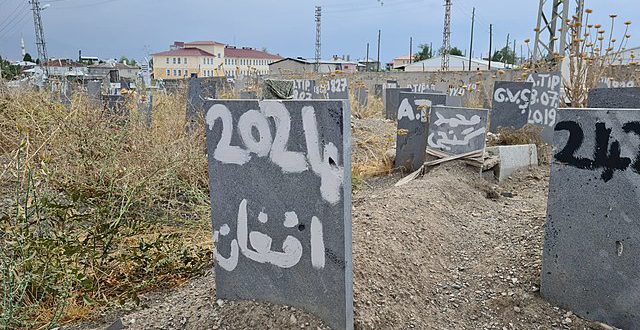 Turkey Is No Safe Haven For Afghan Refugees

Many Afghans who fled their native country after the Taliban seized power saw Turkey as a safe haven in their road to escape persecution and violence.

But Turkish security forces have been accused of using live ammunition and physical force to keep Afghans from entering. Those who do succeed often face arbitrary detention and a plane trip back to Afghanistan.

Turkey has deported nearly 43,000 Afghans this year despite calls by the international community to protect Afghans fleeing Taliban rule. On their return, many deportees face a dire economic and humanitarian crisis and possible retribution under the Taliban.

Many Afghans who took the arduous land route to Turkey by way of Iran were beaten back or fired upon before they reached the border, prompting an international outcry. Undocumented refugees who do enter Turkey say they face inhumane treatment and forced deportation.

Imran, a native of Afghanistan’s eastern Logar Province who gave only his first name, has been deported twice after entering Turkey.

He left Afghanistan due to security concerns, he said, but claims he and other Afghan nationals were mistreated in Turkey, including at the hands of Turkish police.

“We were beaten a lot,” he said from Afghanistan, where he cannot find a job despite promises of help upon his return. “They forcibly took our fingerprints and took us away.”

Faridoon, 39, said he made it to Istanbul with his four children at great financial and personal risk. But he said life in Turkey’s largest city is marked by constant fear.

“I see Afghans being rounded up every day and sent back to Afghanistan,” said Faridoon, who gave only his first name. “I worry about myself and my family. One day they will force us to leave, too.”

For Mohib, an Afghan journalist who escaped to Turkey and lives in Istanbul, life has lost its much of its meaning.

“The biggest change is that you are outside your country, but not as a tourist but in exile,” he said. “You lose your identity. You feel like you are just a name on a piece of paper and that’s it.”

Afghans’ claims of inhumane treatment are backed by international rights watchdogs, who have called on countries to ease their visa and asylum processes for Afghan nationals and to cease deportations.

Amnesty International, in a report published on August 31, criticized both Iran and Turkey for using deadly force to deter Afghans who fled their homeland after the Taliban returned to power in Kabul in August 2021 from entering their territories.

Marie Forestier, a researcher on refugee and migrant rights at Amnesty, said the London-based rights group had documented cases in which “Turkish border guards have unlawfully used live ammunition against Afghans, firing into the air to repel people, and also shooting at them in some cases.”

Amnesty interviewed 35 Afghan migrants who had attempted to cross into Turkey, of whom 23 reported coming under fire. One man said he witnessed Turkish security forces kill three teenage boys. Others described seeing Afghan children being injured and revealed being shot themselves.

In July, rights groups and Turkish media reported that a 4-year-old Afghan child was killed and 12 others, including the child’s mother and other women and children, were wounded when police shot at a car carrying Afghan migrants in the eastern Van Province bordering Iran.

“Any killings resulting from deliberate and unlawful use of firearms by agents of the state must be investigated as potential extrajudicial executions,” Forestier said in the Amnesty report, which noted that none of the Afghan nationals killed or injured appeared to have posed “any imminent threat.”

Turkey is home to about 3.8 million refugees, most of them from war-torn Syria, according to the UN High Commissioner for Refugees (UNHCR). More than 300,000 Afghans — including documented and undocumented refugees, as well as migrants and asylum seekers who arrived over more than two decades of conflict in their home country — are in Turkey.

More than 1 million Afghans have fled their homeland since the Taliban regained power a year ago, prompting Turkish officials to make public appeals for more security assistance to deal with a growing refugee crisis.

Many Afghans — most of whom have no documents and consider themselves refugees because they are fleeing persecution and conflict — are not afforded asylum or refugee status by Turkey. Ankara only recognizes people from Europe as refugees aside from an exception granted in 2013 to Syrians.

Instead, Afghans are placed under a “temporary protection regime” that puts them in a position to be resettled to a third country or be deported.

To keep migrants and undocumented refugees out, Turkey has been building a concrete wall fortified by more than 300 watchtowers equipped with thermal cameras along its around 300-kilometer eastern border with Iran.

“Keeping security precautions on a high level, we aim to show the world that Turkish borders cannot be crossed easily,” Mehmet Emin Bilmez, a former governor of Van Province, said during a presentation of the project to a parliamentary commission in June.

Turkey argues that the wall is for the good of all of Europe, the desired destination for many undocumented refugees. The European Union has helped fund the wall, along with six “removal centers” in which Afghans are detained. The EU in 2015 increased its financial aid to Turkey to help it in its efforts to host refugees and has tried to dissuade Afghans from taking dangerous sea-bound crossings to reach the bloc.

In May, the European Commission noted that “pressure continues along the Turkish-Iranian border” as a result of the deteriorating security situation in Afghanistan. It added that “Turkey continues to make very significant efforts in hosting and addressing the needs of more than 4 million refugees and migrants.”

In the case of the 35 Afghans interviewed by Amnesty, 21 of them reported being tortured while in detention, leading the rights watchdog to call on the EU to ensure that its migration and asylum-related funding does not contribute to human rights violations.

Turkey, meanwhile, has lauded its deportations of Afghan nationals as part of its effort to combat illegal immigration, a hot-button political issue as the country deals with an economic crisis.

On August 23, Turkish authorities announced that more than 197,000 migrants have been prevented from crossing into the country from Iran and Syria so far this year.