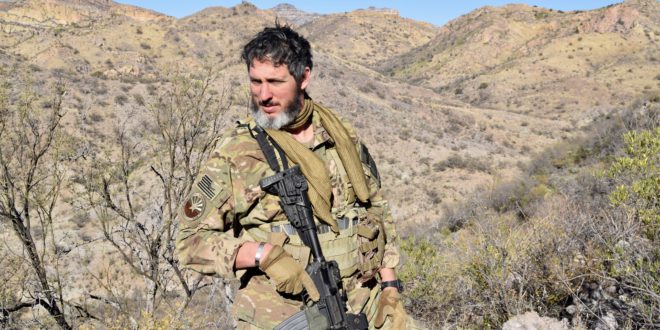 The author on the border (Photo courtesy Heath Hansen)

Arizona Border Recon: We Watched From the Mountains While Cartel Gunbattle Erupted

Wedged between rocks, I scan with my binoculars and notice a bunker complex built into the top of the
opposite hill. I keep observing and see three men, wearing green fatigues, walking between each
fighting position. All three are armed with AK-47’s. That isn’t Afghanistan. It’s Mexico.

I had just made my way up a mountain. It’s hot – not scorching hot, but the temperature is high enough
to be uncomfortable.

My AR-15, and all the combat equipment I wore, feels heavy and cumbersome. My mouth is dry. The
cat’s claw bushes keep ripping into my multi-cams and the uncovered portions of my forearms as I
make my way through the thick vegetation and steep ascent. I can feel the sun slowly burning small
patches of skin on my neck uncovered by my clothing and desert scarf. My lips are chapped from the
freezing temperatures last night, and the dry wind gusts experienced at an elevation of 4,000 feet in the
Pajarito Mountains. Once at the top of this peak, I’m going to be baking all day, scanning a road, a few
hilltops, and some footpaths, watching, and waiting, for something to happen. That is assuming
something will happen. But, this is reconnaissance, and the very nature of the beast dictates that it’s
possible not a damn thing will occur the entire time I’m out here. And, let’s not forget, I’m doing this
as an unpaid volunteer. This is Arizona Border Recon (AZBR).

A week earlier I received the grid coordinates for the location of the next AZBR operation; as it turns
out, it’s a well known drug-smuggling route. I packed my vehicle and made the drive out Friday.
Stopping only once to get a few hours of sleep, I made my way out to Arivaca, AZ, and then into the
Coronado National Forest. The road eventually turns into a dirt trail as I head past Montana Peak,
across valleys and ridge lines, until arriving in familiar territory, from previous operations, near the
Mexican border. As I reach the grid point for our patrol base, I see guys in full camouflage and tactical
vests stacking backpacks next to the makeshift operations center; every time another bag is stacked,
dust clouds swirl skyward.

“We just had eight guys drop their packs and run back south,” Tim Foley, the storied leader of AZBR,
relays to me as we shake hands and bro-hug.

“Not even 24 hours and you already got bodies running back to Mexico,” I reply to this wiry defender
of our southern border.

We laugh and I set up camp and get my uniform on – another group of illegal crossers has been spotted
and an AZBR patrol is heading out to monitor their movement. Like the group’s motto, the patrol will
recon “One Hill at a Time,” and hopefully gather some good intelligence along the way.

Foley is an Army veteran. Living just a few miles from Mexico, he saw how undermanned the US
Border Patrol was in his own backyard. Not one to just sit back and complain, Foley took it upon
himself to help secure America’s porous dividing line.

The group is all-volunteer. Nobody receives compensation for their time in the mountains.

During this particular op, members hail from many parts of the U.S., including Arizona, California,
Nevada, Idaho, and even some from as far as Connecticut. It’s a tight-knit, vetted group of guys; Foley
screens candidates and conducts background checks on everybody before giving them an invitation to
join for an outing. Once the individual arrives, the real test begins.

Talking to some of the members, you learn of past individuals and get a feel for the issues many guys
have once they actually get out on an operation. Enzo, one of the long-time veterans of AZBR, relates
to me:

Some guys will show up with hundreds of dollars worth of brand new gear. They come decked out with
body armor, dozens of AR mags, pistols, survival gear, a month’s worth of food – the whole nine yards.
Then, they go out on their first patrol, and they can’t hack it. They can’t carry all the equipment. The
next morning, they pack up all their stuff and leave.

As a former infantryman, I know full well the difference a few pounds can make when you’re on a
hump in the mountains for a sustained amount of time. Carrying absolute necessities and leaving non-
essentials behind can mean the difference between failure and success. Furthermore, wearing
equipment regularly and making adjustments for more comfortable wear, reduces blisters, joint pain,
conditions the muscles, and maximizes efficiency when out on patrol. When inexperienced people try
to do a forced march without proper preparation, it very quickly becomes evident. A patrol is only as
fast as its slowest man; when a novice holds back efficient progression, the other members of the team
have to divide the guy’s load among themselves and bear the extra burden. Nobody ever wants to be
“that guy.” Luckily, the members of the current operation are all well-versed in this terrain and can
carry their own weight.

The group of smugglers we were searching for has slipped away, but tomorrow is a new day. We head back to camp and prepare.

We wake up the following morning and head to the small bonfire slowly coming alive again from the
previous evening. Last night was cold, so the warmth from the coals helps limber us up for the day’s
events. I put a can of soup next to the flames and wait a few minutes for the liquid to start boiling over.
I then pull out my multi-tool and grasp the can edge with the pliers – breakfast is served.

As I eat chow, I also start hydrating; once the sun makes its way over the mountains, the temperature
will rise dramatically so I want to keep fluids flowing. Foley gives out the assignments while we eat.

It’s going to be a busy day – I’ll be overwatching the edge of the border wall with Hugo, another long
time member of the group. We get our grid coordinates, put on kit, do a radio check with base, and step
off. The others do the same and head to their respective recce spots.

The day’s patrols have begun.

Part of the allure of coming out with AZBR is getting away from the big city. The constant nagging of
modern technology and creature comforts. Things like hot showers, electricity, phones, and internet are
non-existent out here. Someone who feels the need to constantly update their social media accounts
will not enjoy this lifestyle.

On a deeper level, these guys are also away from their families during operations. Participating in
AZBR requires commitment and sacrifice from each individual. These are traits harder and harder to
find in contemporary society. This is what makes AZBR such a unique group of patriots. They’re out
here for something bigger than themselves – the security of the border and protection of the nation.
Hugo and I head east, on our way to the coordinates overlooking the edge of the border wall. Tall
saguaro cactus looms over us, and red tailed hawks soar against the deep blue of endless sky.

We surmount the treacherous terrain and get into position. “Recon Base, this is Recon 2, we’re in the
LP / OP,” Hugo transmits over the radio. LP/OP stands for Listening Post / Observation Post, as every
vet out here knows.

The base radio-operator acknowledges our traffic, and we begin watching the area surrounding our
position. I pull out my binoculars, wedging myself between rocks and some small bushes, and start
scanning. Just on the south side of the border, I notice a dark spot. It’s an arrangement of large rocks
stacked a few feet high; it looks intentional – not like a natural occurrence. Scanning further along the
desert horizon, I notice more formations, and realize these are fighting positions.

The three men with AK-47s are walking in-between a bunker complex. That guns are illegal in Mexico
does not seem to concern these guys.

We radio the information to base, and are told to continue watching for anyone trying to cross the
border. It’s a long day of watching and waiting, but we see no additional movement.

We thought of the guys with AK-47s as “scouts” but when we returned to base that evening, after
removing our gear and grabbing chow, Foley informed me: “Those weren’t scouts. Those were
sicarios; straight up gunmen from the Sinaloa Cartel.”

Sinaloa “owns” that smuggling route into the country.

“Why are they in bunkers out here? Don’t they own this territory?” I ask.

“They own the territory, but these are factions of the same cartel vying for this section of the border.
The more they own, the more money they make,” he matter-of-factly replies after taking a drag off his
cigarette.

There are reportedly 17 different factions within the Sinaloa Cartel. Violence runs rampant across
Mexico and regularly spills over into the Southern United States. Thus far, we are three days into the
operation and I have not seen a single U.S. Border Patrol vehicle.

Later that evening a gun-battle erupts just southeast of our position. The factions are fighting it out to
wrest control of the hilltop. There is non-stop activity, but federal law enforcement is stretched too thin
to regularly patrol the gaps in the border wall. It is for this very reason that AZBR exists. What Foley
does is a drop in the bucket, but at least the public gets informed, on a good day, about what really
happens out there.

The following morning, I wake up after another chilly night. During this operation, our patrols have
pushed backed dozens of illegals. Their attempts to move dope into the States have been unsuccessful;
we have thwarted them for multiple days, and in this business, time is money. After grabbing my pistol off the cot, I tuck it into my waistband, and head over to the fire. “Another day,” I state as I reach the
group and fist bump one of the guys. “Hell yeah, wouldn’t have it any other way,” he replies, handing
me a water bottle. The guys are hanging out, talking and eating breakfast. Foley, Red Bull in hand, is
assigning positions for the day’s activity.

A few moments later, we’re donning our kits, grabbing our weapons and heading into the mountains. The sun’s rays are just starting to pierce the skyline to the east. It’s time to do more reconnaissance and AZBR volunteers are on patrol, ready to face whatever comes.

Previous ‘I Wanna Jump From a Big Iron Bird’: Following in Dad’s Boot-Steps to Become a Paratrooper
Next Veterans Groups Rally to Help Afghan Soldier Arrested While Seeking Asylum in US