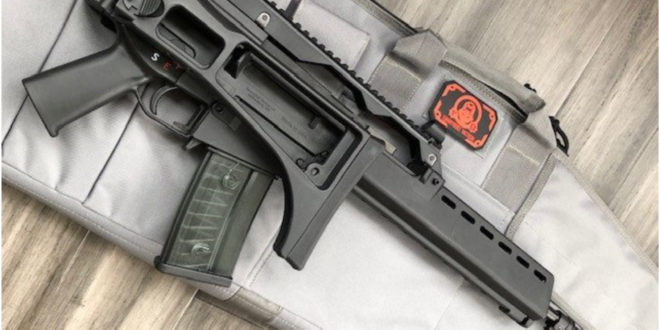 By Friedrich Seiltgen
Speaker of the House of Representatives Nancy Pelosi on July 29 struck the gavel to signify the passing of H.R. 1808, known as the Assault Weapons Ban. Pelosi scheduled the legislation for a vote starting early Friday morning, and by evening the vote tally was 217 to 213, with five Democrats voting against it, and two Republicans voting for it. But the bill as it stands is not expected to become law.

The legislation, authored by Rep. David Cicilline (D-R.I.,) makes its a crime to “knowingly import, sell, manufacture, transfer, or possess a semiautomatic assault weapon (SAW) or large capacity ammunition feeding device (LCAFD).” According to language in the bill, the prohibition “does not apply to a firearm that is (1) manually operated by bolt, pump, lever, or slide action, except for certain shotguns; (2) permanently inoperable; (3) an antique; (4) only capable of firing rimfire ammunition; or (5) a rifle or shotgun specifically identified by make and model.”

Democrats claim that the assault weapons ban under President Clinton, aka the “Public safety and
Recreational Firearms Use Protection Act,” reduced gun crime. They cited assorted studies,stating: “We know that an assault weapons ban can work because it has worked before.”

The FBI itself stated that when the Clinton assault weapons ban sunset occurred in 2004 that
“There was no measurable difference in gun crime.”

After the bill was passed, President Joe Biden stated: ”When guns are the number one killer of children in America, when more children die from guns than active-duty police and active-duty military combined, we have to act.”

Last month, Republicans joined Democrats and passed the Bipartisan “Safer Communities Act”
with some of the provisions listed below.

– $750 Million dollars for states to enact Red Flag laws that allow the courts to temporarily
remove a firearm from an individual who is deemed a threat to themselves or others.

– Enhanced Background Checks – for those under 21 years of age, there is a minimum 3
business day waiting period while the background check is being conducted which can be
extended to 10 business days. There will also be checks into the juvenile criminal
records and mental health status of those under 21.

– Changes the maximum penalty for straw purchases from 5 to 15 years in prison.

The new assault weapons ban, which by the way bans many models of pistols and shotguns, is
not expected to pass in the Senate, as it doesn’t appear to have the votes to overcome a filibuster.

Friedrich Seiltgen is a retired Master Police Officer with 20 years of service with the Orlando Police Department. He conducts training in Lone Wolf Terrorism, Firearms, and Active Shooter Response. His writing has appeared in a number of publications, including Homeland Security Today, and The Journal of Counterterrorism & Homeland Security International. Contact him at [email protected]