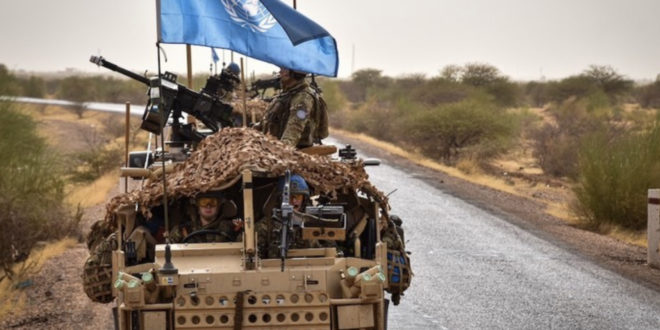 Personnel from the Queen's Dragoon Guards deployed to Mali

British Forces deployed in Mali have killed two armed terrorist fighters after being engaged by small arms fire while on patrol.

On 20 October, the UK Task Group in Mali were engaged by armed terrorist fighters while on patrol. They returned fire and killed two members of a Terrorist Armed Group.

There were no UK or UN force causalities.

This is the first time UK troops have come under fire in Mali.

During a 17-day operation in September, soldiers from the UK’s Long Range Reconnaissance Group (LRRG) disrupted suspected violent extremists from groups believed to include the Islamic State in the Greater Sahara (ISGS), seizing weapons and securing villages in line with the UN’s mandate to protect civilians.

During one encounter, soldiers from the Queen’s Dragoon Guards came across three suspected ISGS militants who ditched items as they fled the scene. One of the three men was detained after driving his motorbike into a body of water in a bid to escape. During a search of the area, the soldiers seized two motorcycles, a rocket-propelled grenade (RPG) launcher with rockets, radios and combat clothing.

Days later, soldiers from the same regiment happened across two armed males, detaining them after they attempted to flee when they were approached. The soldiers seized two AK47 rifles, ammunition, radios and other military equipment.

All three detentions happened in an area where ISGS fighters are known to operate, although part of the peacekeepers’ role in Mali involves approaching members of legal militias who have signed up to the Algiers Peace Agreement to make sure they are complying with its terms.

“This is an important reminder that as we broaden the focus of Defence to State based threats in new domains like cyber and space, we still rely on our Armed Forces to apply lethal forces in close contact with our enemies.

“No matter how much technology we invest in, it all comes to naught without the bravery and determination of our Armed Forces.”

Following a search of the area, the British troops found a cache of weapons including an AK47, a machine gun, 100 rounds of ammunition and a radio.

This operation shows how the UK Armed Forces are stepping up and making a meaningful contribution to the UN’s peacekeeping effort, particularly toward protecting civilians by disrupting dangerous terrorist groups.

Following French/African military intervention in Mali in January 2013, there’s a high threat of retaliatory kidnap or attack against western interests. There have been a number of recent bomb attacks in Gao, Kidal, Timbuktu and in Khalil. Methods of attack have included complex attacks by militants, vehicle ambushes, small arms fire and the use of improvised explosive devices (IEDs). Malian, MINUSMA (the UN Peacekeeping Mission in Mali) and international security forces are regularly targeted, particularly in the regions of Kidal, Mopti, Timbuktu, Gao and Menaka, and attacks are frequent.

In early 2017 the government of Mali joined Chad, Burkina Faso, Niger and Mauritania (G5 Sahel countries) in announcing an agreement to set up a joint counter-terrorism force to tackle the jihadist threat, named the G5 Sahel Joint Force. The Joint Force has also been targeted by extremists.

The threat is likely to continue as groups remain intent on demonstrating capability and increasing influence across the region. The threat to western interests in the region remains. Read more about the threat from terrorism in the Sahel region.

“UN peacekeepers from the British contingent of MINUSMA (LRRG) travelling from Gao to Ménaka on a security patrol repelled an attack by two armed individuals. The UN peacekeepers vigorously retaliated, neutralizing the two individuals.”

Violent extremists in Mali, believed to include Islamic State of the Greater Sahel (ISGS), are causing severe instability and hindering development in Mali and across the Sahel. The Sahel is one of Africa’s poorest and most fragile regions, with high levels of violence and poverty.

The UN mission, with significant support from the UK Armed Forces, is working hard to deter and disrupt these threats.

UK troops are deployed on Operation MAKARA 3 – an operation to stabilise population areas around Menaka and deter or disrupt terrorist groups while protecting and reassuring the local population.

Previous Yitzhak Rabin: The Assassination that shook the world
Next Royal Marines Reportedly “Dominate” U.S. Marines in the Mojave Desert?