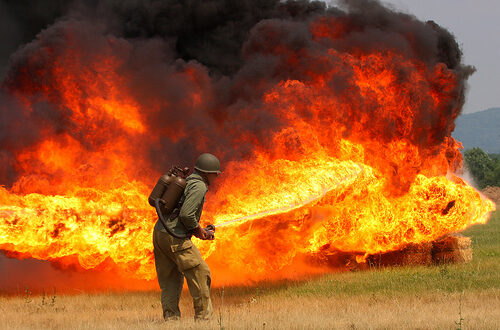 This man says he moved to Wyoming in order to exercise his right to fire up a flamethrower.

Allan Hovland, formerly of California, told the Cowboy State Daily that he became enthralled with flamethrowers a couple years ago.

“It was just one of those things,” Hovland said. “I was looking at a YouTube video of somebody using a flamethrower and I thought, ‘I gotta have that. That looks like so much fun.’”

But Hovland couldn’t use the flamethrower he ordered online, because in California, his $450 device was illegal.

In the United States, flamethrowers are federally unregulated tools, and are not considered a firearm by the BATF, according to Throwflame, a company that sells them.

“No need for any NFA tax stamps, licensing, or even an FFL dealer,” the company writes on its website. “However, it’s the purchaser’s responsibility to ascertain that ownership and/or use does not violate any state or local laws or regulations.”

In Maryland, a flamethrower is defined as a destructive device. They Are legal to own with a Type 9, Federal Firearms License (FFL). In California, the devices must have an operational range of less than 10 feet.

Which is where Hovland’s device flamed out. So he moved to Wyoming, where he could hit the nozzle without fear of breaking the law.

“It’s good for lighting campfires, in a fun way,” Hovland said. “It’s nice to be somewhere where freedoms are appreciated.

Private owners say they use the systems for controlled agricultural burns, getting rid of weeds, and other purposes.

He’s thinking of adding an upgrade, and has chatted with friends about going into the wild.

“We have toyed with the idea of mounting it on the front of a quad to take it out to an unpopulated area and see if we can burn through a snowbank,” he said.