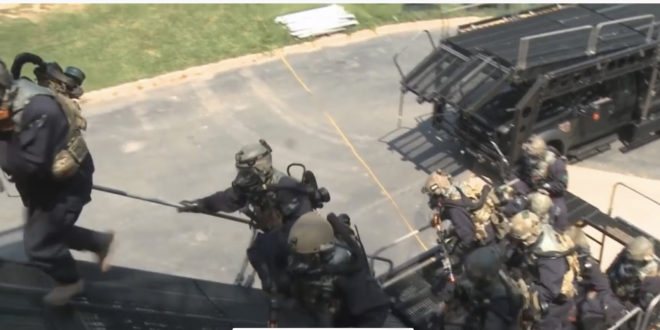 The man who sold Malik Faisal Akram the gun he used to kidnap hostages in a Texas synagogue earlier this month has been charged with a federal firearm crime, announced United States Attorney for the Northern District of Texas Chad E. Meacham.

Henry “Michael” Dwight Williams, 32, was charged Tuesday via criminal complaint with being a felon in possession of a firearm. He made his initial appearance before U.S. Magistrate Judge Renée H. Toliver in the Northern District of Texas Wednesday afternoon. A detention hearing has been set for Monday, Jan. 31.

“Federal firearm laws are designed to keep guns from falling into dangerous hands. As a convicted felon, Mr. Williams was prohibited from carrying, acquiring, or selling firearms. Whether or not he knew of his buyer’s nefarious intent is largely irrelevant — felons cannot have guns, period, and the Justice Department is committed to prosecuting those who do,” said U.S. Attorney Chad E. Meacham. “We are grateful to the many officers and agents who sprang into action as soon as the synagogue hostage crisis began, and who worked tirelessly to track the weapon from Mr. Akram to Mr. Williams. The freed hostages, the Beth Israel congregation, and indeed the entire Jewish community deserve that support.”

“The Dallas FBI Field Office and our partners have worked around the clock since January 15, 2022 to determine how Malik Faisal Akram acquired the weapon he used to terrorize worshipers at Colleyville’s Congregation Beth Israel synagogue,” said Dallas FBI Special Agent in Charge Matthew DeSarno. “Along with our federal, state and local law enforcement partners we pledge to continue our efforts to protect our communities from violence.”

According to the complaint, Mr. Williams – a felon previously convicted of aggravated assault with a deadly weapon and attempted possession of a controlled substance – allegedly sold Mr. Akram a semiautomatic Taurus G2C pistol on Jan. 13. Two days later, on Jan. 15, agents recovered the pistol from Colleyville’s Congregation Beth Israel synagogue, where Mr. Akram had held four individuals hostage for several hours before he was fatally shot by federal law enforcement.

As part of its intensive investigation into the hostage taking, the FBI tied Mr. Williams to Mr. Akram through an analysis of Mr. Akram’s cellphone records, which showed the pair exchanged a series of calls from Jan. 11 through Jan. 13.

When agents first interviewed Mr. Williams on Jan. 16, Mr. Williams stated that he recalled meeting a man with a British accent, but that he could not recall the man’s name. (Mr. Akram was a British citizen.) Agents interviewed the defendant again on Jan. 24, after he was arrested on an outstanding state warrant. After viewing a photo of Mr. Akram, Mr. Williams confirmed he sold Mr. Akram the handgun at an intersection in South Dallas. Analysis of both men’s cellphone records showed that the two phones were in close proximity on Jan. 13.

Mr. Williams allegedly admitted to officers that Mr. Akram told him the gun was going to be used for “intimidation” to get money from someone with an outstanding debt.

A criminal complaint is merely an allegation of criminal conduct, not evidence. Like all defendants, Mr. Williams is presumed innocent until proven guilty in a court of law.

If convicted, he faces up to 10 years in federal prison.

16 January 2022 Special Agent in Charge Matthew DeSarno of the FBI Dallas Field Office confirmed today, January 16, 2022, the identity of the Colleyville, Texas hostage-taker as British Citizen, Malik Faisal Akram, 44. He had entered the United States on a tourist visa a few weeks before the incident.

The FBI has been getting heat all year for losing its purpose, by chasing Americans as “Domestic Terrorists” While other terrorists and killers slip through the cracks.

Aggravated by remarks that an agent made that the hostage taker was focused on a special issue, not the Jewish Community in the Synagogue terror case , the FBI is seen seen as taking a soft role.

Now let me be clear and blunt, the FBI is, and has been, treating Saturday’s events as an act of terrorism targeting the Jewish community. Within a matter of hours, we deployed FBI SWAT, two highly trained units from our elite Hostage Rescue Team; those are the folks who ultimately were the ones who went into the synagogue, along with canines.

We had our crisis negotiation unit. We had one of our folks on the phone with the hostage taker for hours and hours, and that turned out to be pretty important.

We had our crisis management unit, our counter-IED unit. You may remember that for a good part of Saturday we were concerned that the suspect had one or more bombs in his possession.

So those folks and others, there were a total of about 60 flown in quickly from our Critical Incident Response Group in Quantico, on the ground working with our terrific partners in state and local law enforcement to bring the situation to a safe resolution for the hostages.

And we are not finished.

Our Joint Terrorism Task Forces all across the country will continue to investigate why this individual specifically targeted Congregation Beth Israel on their day of worship.

The FBI Lab is actively processing evidence related to the events. Our Operational Technology Division is analyzing and reviewing phones and other electronic devices and media. And there’s a lot more work to be done, and we’re committed to seeing this all the way through.

This was not some random occurrence. It was intentional; it was symbolic, and we’re not going to tolerate anti-Semitism in this country.

We recognize that the Jewish community, in particular, has suffered violence and faces very real threats from really across the hate spectrum.

No member of a faith-based community should have to worry about acts of violence at their services.

To be targeted at your place of worship, a space meant to be a sanctuary in every sense of the word, is, in my view, one of the most heinous acts of violence that can be committed.

And unfortunately, we’ve seen these types of attacks play out far, far too often at synagogues and other houses of worship across the country.

It’s why I have, for some time now, set the expectation that leadership in all 56 of the FBI’s field office should be working in their areas with faith communities to build trusted relationships, to maintain open dialogue, and share information with the folks who need it most. And it’s imperative that we establish and build those relationships before a crisis strikes.

As the situation last weekend showed, it’s those partnerships, training, awareness, and preparation that can make all the difference.

You know there’s a saying that the best time to patch the roof is when the sun is shining, before the storm.

And we don’t want to be meeting for the first time in the wake of a tragedy. So, I encourage all of you to be continuing to educate yourselves and each other and your members about how to recognize suspicious activity and to be ready and willing to report it.

In the meantime, we’re going to keep digging to get more answers for Congregation Beth Israel, for the Colleyville community, and for the Jewish community as a whole. I know it’s disheartening to see that these kinds of attacks continue to happen and that there are people out there who target members of the Jewish faith.

But you can be confident that we in the FBI stand with you. And it is my hope that you will continue to see us as a trusted partner and as a valued resource, as we work together in our collective fight against violent extremism.

Previous Battle of Hue City
Next WATCH: The Four Chaplains, Seamen and Soldiers Who Sailed Into Deadly Waters USAT Dorchester