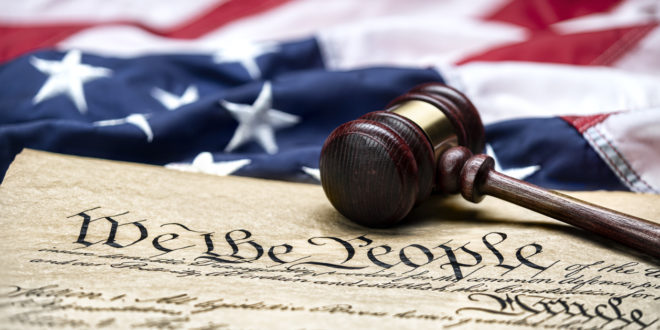 American flag draped around a judge's gavel block and the United States Constitution for use as a symbol of laws, freedom and separation of government powers. Constitution via Gatestone

The Geneva-based International Organization for Standardization approved in September a new merchant category code, or MCC, for banks to use when processing transactions for gun and ammunition stores. While the move from the overseas group was hailed by American gun-control advocates, others warned that the new codes are a back-door way to establish a private registry that the federal government is banned from creating.

The move has sparked legislative and court action.

The Florida CFO, Jimmy Patronis, vowed not to allow the codes to be used in his state.

“The second amendment is foundational to our American way of life,” Patronis wrote in a statement. “The idea that law-abiding Americans would be put on some kind of corporate watchlist is disturbing.”

Noting that our rights “come from our Creator, not the government, and especially not big corporations,” Patronis added: “There is no way we are going to allow that to happen in the free state of Florida.”In a recent Texas case (Net Choice V. Ken Paxton), the 5th Circuit Court of Appeals ruled that major corporations, including banking institutions, do not have a right to limit Americans’ constitutional rights.

Moving the issue forward for Florida, Patronis said he would take the issue to the statehouse.

“We’ve seen a groundbreaking ruling come out of the Fifth Circuit limiting corporations’ ability to curtail American’s constitutional rights, so we are on solid legal footing to pursue a bill protecting Floridians 2nd Amendment Rights,” he said. “We can also take it a step further by barring these companies from doing any business with the State of Florida. We will send a message out to these large corporations that if you are interested in doing business with Florida, you need to make sure that you’re protecting Floridians’ right to arm and defend themselves.”

Patronis stated he will bring action against companies that continue to interfere with lawful commerce in the next Florida legislative session.

Friedrich Seiltgen is a retired Master Police Officer with 20 years of service with the Orlando Police Department. He conducts training in Lone Wolf Terrorism Counterstrategies, Firearms, and Active Shooter Response. Contact him at [email protected]