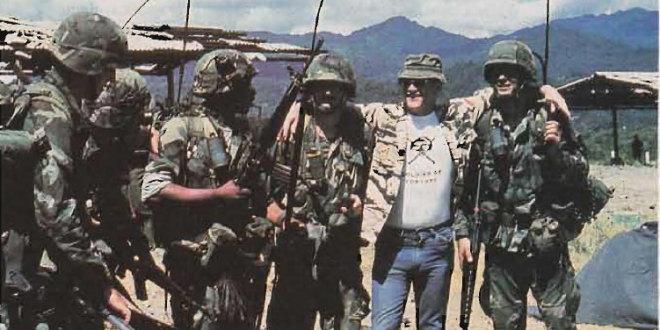 Grenada: One We Won

ONE WE WON!  by Robert K. Brown and Dr. Vann Spencer, from I am Soldier of Fortune

The United States invaded Grenada in 1983.

“Pack up, we are going to war,” I told my then Managing Editor Jim Graves. We packed up and got on the first plane and went to find the war. Or so we thought.

“WHERE’S the war?” we demanded as we charged through the streets of Grenada’s capital, St. Georges. Smiling Grenadians answered in their singsong English,

“The Cubans have gone to the hills. Welcome to Grenada.” By Sunday, 30 October 1983, the liberation of Grenada was almost complete. It was no invasion, it was simply a liberation, at least that’s the way the Grenadians saw it when former Ranger Rod Hafemeister, Graves and I arrived on Grenada.

At Point Salines Airport, we observed an 82nd Airborne artillery battery on the northeast end of the runway, some troops on the perimeter, some foot and vehicle patrols along the road, numerous vehicle checkpoints, some abandoned. We didn’t see any invaders or a single body or blown up cars and trucks. Although rumor had it that significant numbers of Cubans were retreating into the hills to conduct guerrilla operations, we saw only three captured Cuban prisoners in two days. Cuban anti-aircraft guns and several shot-up 8TR-60s, but it was obvious that any real resistance had long since crumbled.

We got to the island with the first load of about 160 press people, five days after D-day. We were enraged that we had missed the war and even more so when the smiling Grenadans asked,  “Are Americans going to stay? We want them to. It ‘s a good thing you didn’t wait a few more days. ”

There was almost no sign of fighting in St. Georges. The objectives of the Ist and 2nd battalions, 75th Rangers, were south of town, and the Marines from the 24th Marine Amphibious Unit (MAU) operated on the other side of the island and north of SI. Georges.

With the exception of forts Frederick and Rupert, which had taken a pounding from carrier-launched A 7s and C-130 Spectre gunships, the only signs of damage around St. Georges was from some scavengers and looters.

The Marines who moved into St. Georges the previous day (it had not yet been assaulted and was theoretically still in hostile hands) were as puzzled about their reception on the island as we were, and the press who arrived with us on Sunday was just as bewildered. One young Marine approached Miami Herald reporter Don Bohning (one of seven newsmen who had slipped onto the island by boat on Tuesday, 25 October, the day of the invasion) and asked:

“Can you tell us what’s going on’? Is the Grenadian army with us or against us?”

The 1,200-man People’s Revolutionary Army (PRA) started laying down their weapons, stripping off their uniforms and putting on civilian clothes to join the crowd welcoming the 6,000 American liberators shortly after dawn. The sky over Point Salines was filled with C-l30s and parachuting Rangers. The ocean turned gray with the fleets U.S. Navy warships.

Cuban “construction workers, ” some actual laborers and some from a military engineering unit, put up stiffer-than expected resistance around Point Salines. Some PRA elements did fight back on the first and second days at Point Salines, Frequente and Fort Frederick. However, most of the PRA, like the overwhelming majority of the population, had little love for its own commanders and none whatsoever for the Cubans.

At the time of the invasion, Grenada was, in theory, under the control of General Hudson Austin and the 16-man Revolutionary Military Council. But, in fact, power was shared by Austin and Deputy Prime Minister Bernard Coard, and coordinated with the Central Committee of the New Jewel Movement.

Directing the NJM from behind the scenes were Soviet Ambassador Gennadiy I. Sachenev, a four-star general and expert in covert actions with ties to the KGB, and Cuban Ambassador Julian Enrique ToresRiza, a senior intelligence officer of the Direcci6n General del Inteligencia (DGI), Cuba’s KGB surrogate.

After American forces had punched through their initial objectives, they moved out into the hills to hunt down fleeing Cubans and PRA soldiers. To the GIs’ surprise, they encountered not hostile fire, but a picnic, with Grenadians offering gifts of cold soft drinks, melons, cheers and information about the hiding places of Cubans and NJM leaders.

Information from locals led USMC Captain David Karcher to a house near St. Georges where Coard, his Jamaican-born wife, Phyllis (also a prime leader of the anti-Bishop forces on the Central Committee) and some other NJM leaders were hiding on Saturday, 29 October. Coard initially indicated he would not surrender, but changed his mind when the Marines targeted anti-tank weapons on the house. Captain Karcher reported that Coard came out muttering,

While Coard waited in the Marine compound at Queen’s Park to be heli-lifted to the USS Guam, a hostile crowd of Grenadians gathered to mock him, chanting, “C is for Coard, Cuba and Communism!”

Austin was captured in a similar fashion the next afternoon: Locals tipped the 82nd Airborne he was hiding in a house at Westernall on the cast side of the island.

A quick trip to Fort Rupert by Washington Times reporter Jay Mallin, Lionel “Chu Chu” Pinn (an old friend of SOF), and myself revealed that no one was guarding the NJM Central Committee headquarters, the deputy minister of defense’s office or the equipment stores at Fort Rupert. We searched all three locations. In addition to finding a collection of new Soviet helmets, canteens, mess kits, packs, AK-47 bayonets, military manuals and the NJM flag that had flown over the fort, we picked throu1gh the papers scattered around the office of Lieutenant Colonel Ewart Layne, Grenada’s deputy minister of defense. We also located documents in Fort Frederick and Butler House, the prime minister’s office.

We discovered documents and other physical evidence, along with information gleaned from other sources recovered by the U. S. forces indicated that:

2) As in Nicaragua, more weapons than Grenada could ever use had been shipped to the island;

3) Bishop was killed because of a power grab by Coard and because he was not as pro-Cuban as other Central Committee members thought he should have been;

4) The NJM was losing control of the country because of its excessive pro-Cuban and pro-communist attitude; and

5) Some well-known Americans had highly questionable dealings with the NJM.

Not sure you want this stuff in the bullets

Highlights from the documents we recovered:

SecondIy, Bishop needed help securing spare parts and tires since 23 of Grenada’s 27 trucks and eight of 10 jeeps were inoperable.

But the kicker was the comment that the Barbados-based counterrevolutionaries had learned “that the PRG [People’s Revolutionary Government of Grenada) was paying someone at the Harvard University Radio Station.”

I won’t bore you with the other massive documents we found. I got the story to Time Magazine.

As soon as I returned to Boulder, I called Dick Duncan who at that time was the assistant Managing Editor for Time Magazine. I described what we had discovered. He was excited and flew out a photographer and reporter to evaluate the documents the next day. They perused through the documents.

When the Nov 1982 issue of Time hit the stands, it carried an article, title “A treasure Trove of Documents: Captured Papers Provide Insights into a Reclining Regime said.

“Addition documents were shown to time by Soldier of Fortune, a Boulder Colorado monthly magazine that specializes in military weapons and tactics; it said the papers had been overlooked by U.S. forces. The documents indicate that Grenada also had military agreements with Vietnam, Nicaragua, and at least one Soviet Block country. A top secret paper dated 18 May 1982, records a shipment of ammunition and explosives from Checosolvakia via Cuba. One document, signed last November by Nicaragua’s Vice Minister of Defense, provides for the establishment of a course in Grenada to teach English-language military terminology to members of the Nicaraguan Army.”

We didn’t find a war, but we found highly sought intelligence.

Previous Operation Urgent Fury, the 1983 invasion of Grenada
Next Lt. Henry Harboard, ‘The Breaker’ Morant: the closing arguments, the request for pardon and the execution 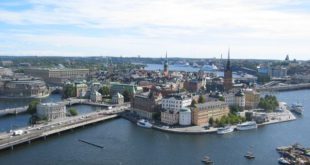