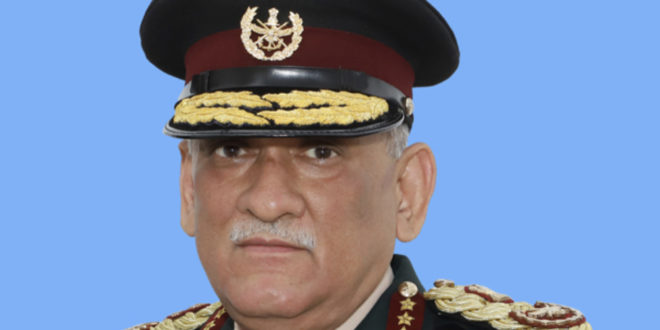 The U.S. Embassy extends its deepest condolences to the Rawat family and the families of those who perished in the tragic helicopter crash in Tamil Nadu.

As India’s first Chief of Defence Staff, General Rawat spearheaded a historic period of transformation in the Indian military. He was a strong friend and partner of the United States, overseeing a major expansion of India’s defense cooperation with the U.S. military. In September, he spent five days traveling throughout the United States as part of a counterpart visit with General Mark Milley to discuss military developments and opportunities to enhance our cooperation with like-minded countries. His legacy will continue on.

Our thoughts are with the Indian people and the Indian military, and we pray for Group Captain Varun Singh’s full recovery. U.S. Embassy

Officials say 12 others, including his wife, died when the Russian Mi-175V chopper went down in a forested region in Tamil Nadu around noon local time.

An air force officer, who was the only survivor, is in hospital.

“With deep regret, it has now been ascertained that Gen. Bipin Rawat, Mrs. Madhulika Rawat and 11 other persons on board have died in the unfortunate accident,” the air force said in a statement hours after the crash was reported and images of smoke billowing from its mangled wreckage flashed on Indian television.

Locals said they heard a blast and saw the chopper on fire.

The 63-year-old Rawat, who was previously India’s army chief, was appointed as the country’s first chief of defense staff two years ago. The post was created by Prime Minister Narendra Modi’s government to provide “effective leadership” to one of the world’s largest militaries.

Modi called Rawat “an outstanding soldier” in a tweet. “A true patriot, he greatly contributed to modernizing our armed forces and security apparatus. His insights and perspectives on strategic matters were exceptional,” the prime minister said.

Rawat was involved in steering an integration of the army, navy and air force and carrying out reforms to overhaul the military, which has faced fresh challenges since last year as it remains locked in a standoff with China along disputed Himalayan borders.

Rawat called China the biggest security threat to India last month. He visited the United States in October to discuss closer defense collaboration with the Pentagon.

Defense Minister Rajnath Singh called his “untimely death an irreparable loss to our armed forces and the country.” In a tweet he said “General Rawat had served the country with exceptional courage and diligence. As first chief of defense staff, he had prepared plans for jointness of our armed forces.”

The chopper crashed about a half hour after it took off from an Indian Air force base in Sulur and was just a few kilometers short of its destination in Wellington, where Rawat was due to deliver a lecture at the Defense Services Staff College.

The Indian Air Force said that an inquiry has been ordered to ascertain the cause of the crash. Domestic media reports attributed it to low visibility due to foggy conditions.

The Mi-17V5 is a sophisticated military transport helicopter, often used to ferry top officials and ministers.

Previous Mother of Slain Army Ranger and former NFL Star Pat Tillman, on Her Quest to Expose the Military Cover-Up of Her Son’s Death by Members of His Own Unit
Next A Hurricane of lies ‘Steele Dossier and Crossfire Hurricane