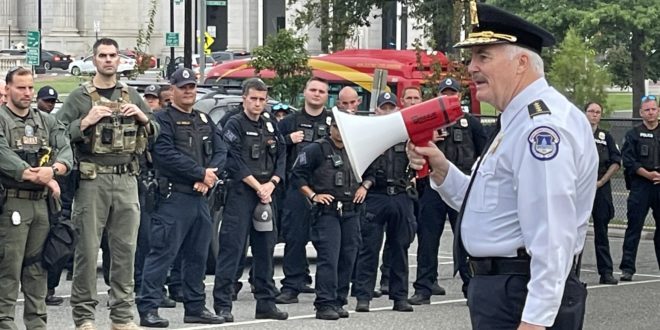 Here are a few more pictures of the 7:15am swearing-in with our local, state and federal law enforcement partners.

18 January, Approximately 400 to 450 people were inside the protest area today (excluding law enforcement). in the Insurrection II protest.

“The comedy of today’s protest, billed by the media as Insurrection 2, is there were so many undercover cops they were arresting each other by accident. It’s what happens when the Deep State throws a party for terrorists and insurgents but none of the invitees show up” Dinesh D’Souza, reporter tweeted.

Law enforcement was in the ready for the delusional anticipated event to overthrow the government.

The FBI and Pelosi’s clowns were so well prepared that they erected a fence again and put up cement blockades to keep out the imaginary potential assassins.

And the fearful, brainwashed Americans prepared for the biggest extremists terrorist event in history of the United States. After all, 6 January was the worst according to Congress members. Americans stood still, the vulture media was on the ready for the big story for days before the warnings of the second “Insurrection.”

But skeptics of the Pelosi Gang were not fooled.

Unfortunately, with the law enforcement being cagey about 6 January, which unfortunately got out of hand spontaneously as the FBI reported, no one will know the full truth.

The rally was basically in response to reports of abusive jail conditions for those arrested after 6 January, some with charges unconfirmed. And frustration by a failed administration that has allowed thousands to flood into the U.S. border, some terrorists and rapists and criminals, while U.S. military and LEO officials focused their time on chasing American “Extremists,”

Hopefully 18 Sept Insurrection II helps put a stop to the charade, but don’t count on it with a sensationalist media having long lost its purpose of being a watchdog for Americans. Forgotten is that the Constitution and the media were to protect Americans from tyrannical governments, left or right.

Previous Legionnaire, OSS Officer, US Marine and Hollywood Heartthrob
Next Marine George C. Scott as Patton: CLIP – I Won’t Have Cowards in My Army