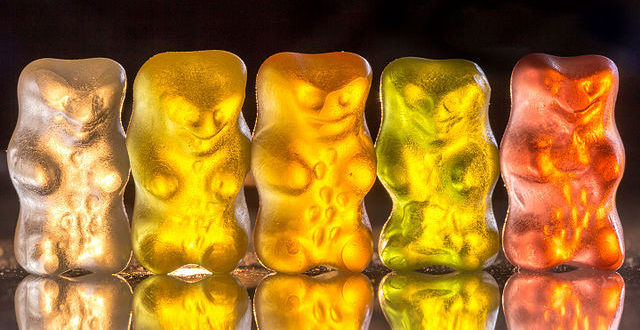 When the Lance Corporal Met His Match Against Gummy Bears

Back in 2005, I spent a tour living in an old Iraq bathroom in the control tower on Al Taqqadum airbase.  Great place, you get a bit smell tone deaf to the room, but it was better than tent living. We received a ton of care packages back then. The kindness was shared throughout the United States as the boxes rolled in.

One day, I opened a box that held a giant plastic tub of Gummy Bear Vitamins. You know, the kind you buy in bulk at Costco or Sam’s Club? This thing must have weighed five pounds and had a sweet note attached to it saying, “I hope you can share these with the children of Iraq.”

Well, I didn’t venture outside the wire at all to hook up with the kids of Iraq but placed them on a shelf behind my desk in the office with the intention of giving them to the folks who did drive around town. They sat there for a week and I actually forgot about them and didn’t notice they had disappeared.

One day, I’m sitting in my office filling out some reports when I noticed my young Lance Corporal, (Lance Criminal) Shane Manual (we called him Leghound) across from me was opening his large file drawer every 10 minutes or so to snatch out a handful of something, and putting a handful of colorful things in his mouth. See, these were OLD military desks, and the drawers screeched as you opened them. A sound that is very ANNOYING and catches your attention.

As he goes for another snatch and go, I call for Leghound, but he has earbuds in with music jamming, so it’s to no avail. Being a bit lazy, I ball up a piece of paper and throw it across the office, hitting him in the back of his head.

It startles him and he immediately spins around. Something like, “Sir, why did you hit me with the paper?”

“Sorry Leghound,” I apologize. “I called for you but your music was too loud. I’m dying to know what you are eating that is hidden in that large desk drawer?”

Leghound just smiles and opens the drawer pulling out that giant now half eaten jar of Gummy Bear Vitamins. “Just eating these Sir. Man, they are good!!”

I looked behind me to see the jar missing.

“Hey Leghound, where did you get those?”

He pointed to the shelf behind my desk.

I asked, “Hey did you read the jar to see what they are?”

He smiled and said “Yes Sir, Gummy Bears, and they are awesome.”

Shaking my head, I said, “Leghound, you idiot, those are Vitamins! Read that warning label on the side.”

He starts reading the label and gets to the part about “Caution or warning, don’t eat more than three of these things, if a kid does, call poison control” type thing. Now Leghound is looking a bit pale.

“Leghound, how many of these have you eaten today?”

He holds about four fingers together down the side of the jar, showing the depth of gummy bears he has consumed in the few hours at work snacking on them.

I have to admit, I’m a bit worried at this point, so I call my good friend Dr. Ronny Jackson over at the hospital.

“Hey Ronny, got a question for you, someone sent me a giant ass jar of gummy bear vitamins and my clerk Leghound…Yeah, that’s him… has eaten maybe a pound of these things; hell, maybe two. Do I need to send him over to get his stomach pumped?”

Ronny is laughing and tells me, “Naw, he’s a healthy guy, it will just turn his gut into a petrified solid mass and we may have to give him some laxatives to free him up, but he should be okay.”

I pretend to look really worried and spin the chair around and lower my voice. “Really? That serious? How the hell can it make him sterile? What? I didn’t know an overdose like that could cause your balls to harden to the point you have to remove them. Oh the pain? Yeah I can see that…damn!!”

Now Ronny is on the other end saying no that I didn’t understand him, he’s going to be okay, etc., but I continue on with a one sided conversation about how this could cause erectile dysfunction, being sterile, and never having sex again in his life.

Ronny catches on and asks “He is standing there next to you?”

I nod my head, looking at him and reply “Yep, sure is, so are you sure he won’t die from this?  Yes, keep a look out for the following symptoms and send him over if he exhibits any of the following right? O.K. thanks Doc.” I hang up the phone after making up a bunch of unrelated horrible sounding ailments that our young hard charger may be facing.

Now Leghound is really sweating and probably wondering if that was his last meal. How do you explain that you went to war, and died from an overdose of gummy bear vitamins while in the safety of an old Iraqi control tower?

I let ole Leghound suffer and marinate on his actions for a bit before I told him the truth. He ditched the gummy bears, and I don’t think he took anything from my shelf again without asking.

Mitch “Taco” Bell is a retired Marine KC-130 pilot flying for a major airline on the B-737. You can watch his Tall Tales with Taco Bell on Facebook and YouTube. His past stories can be found on The Sandgram. 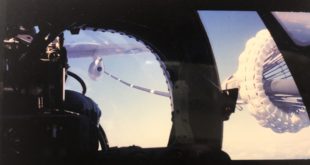 ‘Pyro’ Was Famous for Sprinting Through the O-Club With a Flaming Newspaper Tucked In His Butt; And Then Came the In-Flight Emergency