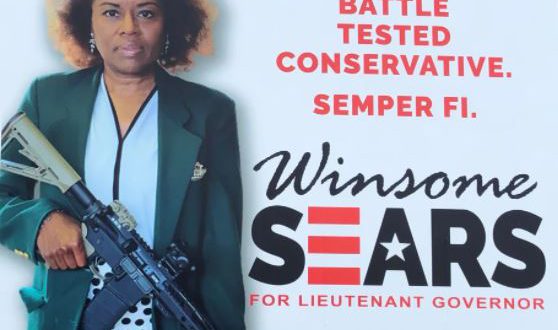 “This country has done so much for me, I was willing to die for it.” She told CNN

“There are some who want to divide us and we must not let that happen. They would like us to believe we are back in 1963 when my father came,” said Sears. “We can live where we want, we can eat where want — we own the water fountains,” adding, “We’ve had a Black president elected not once but twice, and here I am living proof … In case you haven’t noticed, I am Black, and I have been Black all my life.”

Winsome was elected to a majority Black legislative district! No other Republican has done that in Virginia since 1865: She consequently also became the first (and still only) Black Republican woman elected to the House, the first female veteran, and the first legal immigrant woman.

Winsome is a mother, wife and is proud to have served in the United States Marines. She was also a hard-charging Vice President of the Virginia State Board of Education and received presidential appointments to the US Census Bureau (where she co-chaired the African American Committee) and the Advisory Committee on Women Veterans to the Secretary of Veterans Affairs.

In addition to her Masters degree, Winsome also built a successful business as a trained electrician and understands the importance of helping small businesses thrive. However, Winsome is most proud of her community work leading a men’s prison ministry and as director of a women’s homeless shelter for The Salvation Army.

She has tough agenda:

Winsome knows a quality education is the best way to lift people out of poverty and make sure they have access to a good paying job. Winsome will champion investments in public schools, empower parents with choices, and raise standards in education. Specifically, Winsome will push to:

Keeping Virginians safe is a top responsibility of state government. As Lieutenant Governor, Winsome will defend our law enforcement heroes, crack down on violent criminals and preserve truth-in-sentencing – all while promoting commonsense criminal justice reforms that give nonviolent offenders a path to redemption. Specifically, Winsome will push to:

Virginia is home to over 800,000 veterans and their families, including Winsome Sears. Winsome served in the U.S. Marines, and she wants to ensure Virginia remains the most veteran friendly state in the nation. As Lieutenant Governor, Winsome will push to:

Previous Sheriff: ‘You give your car keys to a drunk, I will arrest you’
Next Biden takes Marxist terror group FARC off terror list, paves the way for Castrochavismo in Colombia