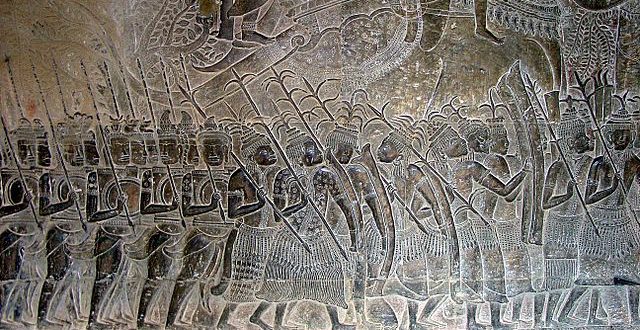 Editor’s note: Former American diplomat William Boudreau encountered mercenaries during his career with the Foreign Service. Here are his recollections and observations about them.

I will not advocate for a humanitarian award for any mercenary I have known. However, they embrace humanity. My point is they were rational, compassionate, interesting to chat with and devoid of psychotic tendencies.

During my service in Africa as an American career diplomat, I met numerous mercenaries who were engaged in one mission or another. Not one of them fit the common stereotype of anti-social killers. When one hears of atrocities in a mercenary action, almost always it is the opposing forces committing them.

A prime example is the Congo following its independence in 1960. Chaos has been the rule since its first day as a nation. Moise Tshombe was astute enough to recognize he needed mercenaries to ensure the security of his Katanga Province, with its valuable mines. They took on all comers in the splintered country, proving themselves far superior to the ragtag national army and rebel groups.

At first, they were protecting the Katangese provincial government and then were hired by President Mobutu to spearhead the national army’s efforts to repel rebels, mostly Simbas, who were supported by communist and radical regimes. These left-wing countries did their utmost to undermine the mercenaries, using the media and United Nations to denounce the mercenaries as barbarians. They depicted brutal killing of innocent civilians as the savage acts of the foreign mercenaries, whereas there was solid evidence that the opposition was the perpetrator.

Contrary to the propaganda of the day, the mercenaries I knew valued life—theirs and that of others. Most had prior service in their national military and were hired for their skills, discipline and ability to get the job done.

There were no Americans among the mercenaries I met. They were European from various countries, South African and Rhodesian. Another group I came to know was the Cuban exiles hired by the CIA for sundry tasks, including flying its Western International Ground Maintenance Organization (WIGMO) aircraft. Most mercenaries had other occupations when not on missions; in fact, they led dual lives. Among them were plantation owners, garage mechanics, importer/exporters, construction workers, farmers, insurance salesmen, and so on. I got to know these warriors over beer at bars and social functions in Kinshasa, and in the field. I traveled to most of the country, to wit, Katanga, Orientale, Equateur, Nord Kivu provinces and throughout the Bas-Congo.

I met mercenaries in numerous settings and not one struck me as irresponsible and callous. While no longer members of standard military units, they behaved as soldiers. Sure, they kicked up their heels when off duty, they weren’t saints after all, but they kept each other under control. They struck me as a brotherhood, looking out for each other.

When I went out into “the bush”—any non-urban area—to conduct my duties of checking on American citizens (most were missionaries), I visited with mercenaries in the area. The welfare of Americans scattered across the country was my responsibility as political/consular officer at the embassy. I used such opportunities to meet with the mercenaries who were in the area. We discussed their progress in routing out the Simba rebels, along with their witch doctors, who were attempting to establish a separate communist regime based in Orientale Province.

I cite an incident to illustrate the character of these mercenaries. I learned from my missionary contacts that some American college students were trekking through northern Congo, traveling east. These adventurers were oblivious to the danger that lay in their path. They were intent on passing through an area in Orientale Province with a known Simba presence; they had no knowledge they were heading into a war zone. They knew nothing of the Simbas and their savagery, which spared no lives. I contacted mercenaries that I had met and explained the situation. They took immediate action, located the trekkers, insisted on the urgent need to get out of the area and escorted them through the eastern Congo to Rwanda. They cared about innocent lives and brought them to safety.

As I wrote in my memoir, A Teetering Balance, depicting our efforts to counter Soviet attempts to gain a foothold in Africa during the Cold War, Ernesto “Che” Guevara became involved with rebel groups in the Congo. “Anxious to be involved in revolutionary activity once again, the Congo appeared as fertile ground.” With Fidel Castro’s blessing, he entered northern Katanga Province from Tanzania with black Cubans in April 1965. His goal was to set up a training camp for “freedom fighters” to operate “not only in the Congo, but also in Angola, Mozambique, Rhodesia, South Africa and South West Africa.”

Colonel Michael Hoare led mercenaries in attacking Guevara’s group of Cubans and Simbas. The CIA’s Cuban-exiles piloting WIGMO planes assisted by strafing the rebels. Guevara did his best to inspire zeal and discipline among the Simbas, but he was frustrated by “what he perceived as the rebels’ motivation deficiency.” Compelled by mercenary successes, he abandoned his efforts after seven months to seek more promising circumstances to spread his revolutionary ardor.

My observations on mercenaries are not limited to their operating in the Congo. Some were assisting liberation movements in Angola, in its struggle for independence from Portugal. I met with others in the Comoros when I was assigned to Madagascar with added responsibility for the Comoros. Ahmed Abdallah had been installed as president of the Comoros by Colonel Bob Denard, whom I had met in the Congo, and a band of mercenaries. Several remained on the islands and I would run into them on my visits. The Comoros being an Islamic republic, no liquor was allowed in the country except at a couple of hotels. Thus, watering holes were limited and they brought out an interesting cast of characters.

Some mercenaries visited a diplomat colleague and me in Washington, DC, after I had left the Congo. I took a Belgian to a college football game and spent most of the game explaining its intricacies. Our visitors were all house broken and sociable with the neighbors.

I wrote When Olive Leaves Beckon with a view to depict mercenaries in the proper light. I contend that by and large, mercenaries blend into society when not on missions. They are not rabid killing machines, as some would have you believe. They return home and are accepted by neighbors as contributing members of their communities. I will not advocate for a humanitarian award for any mercenary I have known. However, they embrace humanity. My point is they were rational, compassionate, interesting to chat with and devoid of psychotic tendencies.

The loss of my Spanish friend, Alfonso, was a personal tragedy. I met him in the Congo when he was transitioning from being a mercenary to work in import/export. He had become engaged to a Belgian and was looking forward to a changed lifestyle. He visited our home several times and entertained our two sons. When I went on R&R with my family, I invited him to stay at our house while we were away. He was there for a few weeks until our return. Shortly after this, Congolese butchered him, including castration, and his remains thrown into the Congo River abducted him. I have dedicated When Olive Leaves Beckon to his memory.

Previous Anna Chapman and the ‘Illegals’ Were Caught Spying Against the US for Russia; Do Others Remain Undetected?
Next ‘Explosive Traps’: EOD Units Hunt for Russian Mines and Shells Inside Ukraine