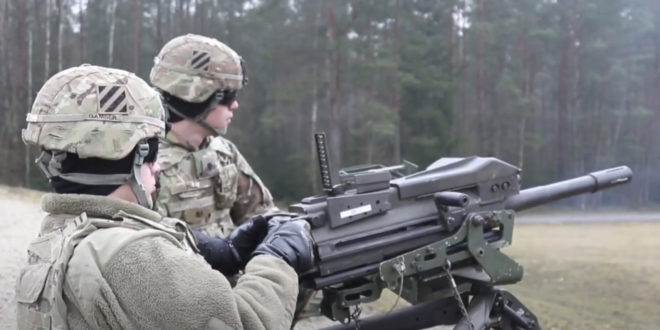 MK19 Grenade Launcher. The MK-19 has been used since 1968. It is designed to fire 40mm grenades.
The MK19 is a 40mm, fully automatic, blowback operated, air cooled machine gun. Production first began in 1967 for the U.S. Navy during the Vietnam War. It replaced the hand-cranked MK18. The MK19 is designed for a tripod or vehicle mount and operation. One of the initial applications was for the Patrol Boat, Riverine (PBR).

Minimum Range of 75 meters (for safety)

Rapid rate of fire is 60 rounds per minute

Sustained rate of fire is 40 rounds per minute

Previous Marine DUANE EDGAR DEWEY smothered a deadly missile with his body, saving his comrades in the Korean War
Next Remembering Gen. Colin Powell: DesertStorm30: How we fought the war