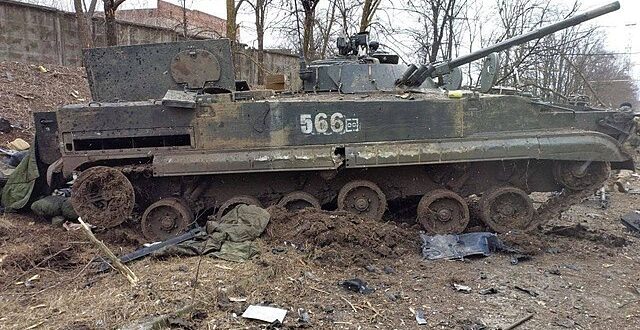 KHERSON, Ukraine — For Vladyslav Nedostup, the eight-month occupation of his native city has receded swiftly into the past since the last Russian soldier escaped Kherson on a speedboat in early November, and already seems distant and unreal.

But that chunk of time has left him irrevocably changed: Still a chubby, mild-mannered sociology graduate, he is now also a person who has killed other people — five Russian soldiers, he said sitting in a bar in the liberated city days after the Russian retreat.

“If a year ago somebody told me that I would become a partisan or kill somebody, I’d laugh at them,” he said. “But here we are.”

A 28-year-old car parts dealer, Nedostup had no military experience before Russia launched its large-scale invasion of Ukraine on February 24.

“Come along if you want”

Shortly after that, he said, his father told him he was going to the local military enlistment office, adding, “‘come along if you want.'”

Nedostup followed in his father’s footsteps and joined the local territorial-defense unit, where he received a Kalashnikov rifle with four magazines — though he never completed the paperwork, he says, and the situation in the city was “very chaotic” at that point.

Russian forces soon entered Kherson, a port city in a strategic location near the mouth of the Dnieper River northwest of the Crimean Peninsula, turning it into the only regional capital they have managed to capture since the invasion — though they have now lost it again.

Nedostup’s unit did not engage in clashes with the invaders, and he was quickly forced to go into hiding, he says. His commander and two others in the unit were interrogated and imprisoned for five days, and he repeatedly received threatening phone calls.

It wasn’t the threat of interrogation that he found most unbearable, he says, but the fact that “the Russians started to feel at home in Kherson.”

Soon after the occupiers dispersed the initial protests, they hung Russian flags around the city, created a military-civil administration, and introduced the ruble as the currency in the city of Kherson and parts of the surrounding region — all of which Moscow would baselessly claim as Russian territory in September — that they controlled.

When it seemed clear that there would be no more fighting for Kherson, Nedostup decided he did not want to go with some of the members of his unit to fight in the neighboring Mykolayiv region and returned to the city, as did some of his comrades.

Nedostup wanted to “stay useful” and “continue fighting,” he says, so he started to gather information on the Russian troops and passing it on to friends in the Ukrainian Army. But as horrific news kept pouring in from around the country, including about the massacre in Bucha near Kyiv and the siege of the Azovstal plant in Mariupol, east of Kherson, he grew desperate to do more.

The last straw came in late April. When a Russian missile strike killed a woman named Valeria Hlodan, along with her baby daughter and mother, in their apartment in Odesa, Nedostup — who had been her classmate in childhood — decided to seek “bloody revenge.”

He did not know how to kill, he says, so he Googled it and studied videos on YouTube.

A few days later, he says, he walked up behind a Russian soldier — an anonymous man in a military uniform who was walking out of a bar in the neighborhood where Nedostup had lived for most of his life — and cut his throat with a knife, killing him.

“I didn’t feel anything, only fear and the absurdity of it all,” Nedostup said, as he was recalling the attack over a meal at a bar in mid-November. After fleeing the scene, he went back to the apartment where he was living, took a long shower, and watched episodes of the U.S. television series The Office on his computer.

The bar where Nedostup was telling his story was one of only a few that were serving food in the city amid power and water shortages caused by strikes Russian forces have launched on infrastructure following their retreat, and the only cigarettes available were from Russian-controlled Crimea.

Kherson was dependent on Russian imports during the occupation, and the owner said cigarettes and many other products from mainland Ukraine had not yet arrived.

From early March to early November, many of the city’s residents chose or were forced to collaborate with the occupiers in various ways. The car-repair company where Nedostup had worked before the invasion was repairing Russian vehicles, he says. Before Ukraine retook Kherson, his former boss left for Spain and some employees fled along with the Russians.

As the months passed, life for those who resisted the Russian occupation authorities became increasingly dire. A pretrial detention center in the city was used to interrogate and torture those unwilling to collaborate, survivors and Ukrainian officials say. The number of people who suffered is not yet known, but locals say dozens of people were taken to the facility every day.

Nedostup knew he was being sought by the Russians, he says, not least because his father’s apartment had been searched. He hid by moving among several apartments in different parts of the city, and kept his contacts with others to a minimum so as not to “pose a danger to them.”

“In these circumstances, there was a lot of time to be alone with yourself, think through who you are and what your role in this world is,” he said. “I came to understand that justice demanded that I act.”

In early June, a friend of Nedostup’s noticed that several Russian soldiers were often spending their afternoons idly smoking cigarettes and drinking tea together in the courtyard of his block, waiting for their shift to end instead of patrolling the streets.

With his friend as a lookout, he said, he shot two soldiers dead with the gun he received from the territorial-defense unit shortly after the invasion. The two wanted to take the soldiers’ documents and weapons, he says, but things were happening too fast and they ran away.

At that point, Nedostup had already built his own network of informants and started to report directly to Ukrainian military intelligence, he says. He did not take part in the organized diversion activities of the underground resistance, though, and was instructed to always prioritize his safety.

Nedostup killed the Russian soldiers on his own accord, “without any orders” he said. He stressed that his actions were “legal” because of a law adopted in early March that allowed civilians in Ukraine to kill Russian military personnel deployed to Ukraine.

Article 5 of the law on Ensuring the Participation of Civilians in the Defense of Ukraine says that civilians shall not be liable for the use of arms against persons who carry out armed aggression against Ukraine.

Illya Vorobyov, counsel of criminal practice at the Miller Law Firm in Kyiv, told RFE/RL that he saw no reason to open an investigation into Nedostup’s actions as described in this article. He also said that from the point of view of international law, Nedostup should not be treated as a civilian, but as a member of the military.

After the liberation of Kherson, Nedostup’s friend Anastasia Burlak was shocked to learn that he had killed Russian soldiers, but said she was convinced that people who were “liquidating the occupiers” should be “treated as heroes.”

Burlak, who worked as a restaurant manager during the occupation, described life under constant pressure, with Russian soldiers using their position of power to harass women and threaten men. She also said that she used to tell Nedostup everything she could about her clients.

“At some point I came to know who goes where, where they drink, and I started to recognize their faces,” Nedostup said of Russian soldiers in the city.

Nedostup said that he killed another two Russian soldiers in Kherson at a time when the Ukrainian Army was carrying out a successful counteroffensive in the Kharkiv region in the northeast. In early September, he says, he and two acquaintances killed two soldiers with a knife as they walked out of a karaoke venue in an outlying district. They took their passports away and put their bodies in sewer hatches.

Telling of his alleged actions, Nedostup said he had “no nightmares about the people I killed.”

“In the worst nightmare I had, I was sitting in a dark room close to Freedom Square where I lived and through the window, I saw a column of Russian vehicles moving along Kherson’s main street,” he said. “Then I woke up and saw a military vehicle in that exact place.”

With Kherson liberated, Nedostup was set on continuing his fight. He was waiting for a military uniform and working with the Ukrainian Security Service (SBU) to identify suspected collaborators, he says.

Nedostup was picked up from the bar by Mykhaylo, a friend who preferred to withhold his surname from publication for security reasons.

On The Other Side

Mykhaylo, who is in his early 30s, spent the entire period of the Russian occupation working as a taxi driver. When his wife and daughter managed to leave the city, he became an informer for Nedostup and other members of the resistance.

Always on the move

Mykhaylo says he knew every place in Kherson that was shelled by the Ukrainian Army, including those targeted with U.S.-supplied HIMARS artillery systems, which residents said hit groups of Russian soldiers with high precision.

“I was always on the move, so I had precise information,” Mykhaylo said as he drove out of the city center in his worn-out Mazda, adding that in one case “the target was destroyed 20 minutes after I reported about it.”

“I do not like the phrase ‘a good Russian is a dead Russian,’ though,” he said after a silence, adding that most of the Russian soldiers who rode in his taxi “were brainwashed by propaganda” and “had no choice but to serve in the army.”

“War is an evil thing and there is nothing good about death,” he said, parking his car next to the Antonivskiy Bridge, which spanned the Dnieper but had been destroyed by the retreating Russians a couple of days earlier.

Mykhaylo’s father was stuck on the other side of the river, which is still under Russian control. They can hardly contact each other because of the weak mobile signal.

The loud swish of a bullet and the sound of a machine gun interrupted the cigarette break at the riverbank, and Mykhaylo hopped into the car and quickly drove away.

Such sounds would become more frequent again in the weeks that followed, as Russian forces pounded the city, killing at least 17 people in a little over a week, and the euphoria of liberation was dimmed by the threat from across the river.

“War is actually rather idiotic and senseless, especially in the 21st century,” Mykhaylo said, speeding back to the city.

Previous This Afghan Soldier Fled the Taliban, Was Arrested While Seeking Asylum in US
Next Inside the Mind of a CIA Contractor: A Conversation With Shawn Ryan