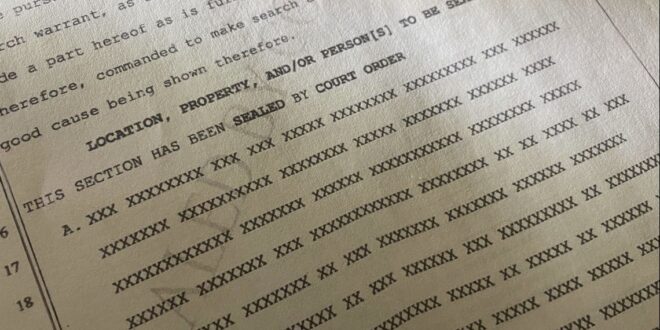 Officers from the San Diego police department along with FBI Agents conducted raids using redacted warrants at several locations throughout San Diego County, California last week, residents said. The redactions included the location and the people being searched by the warrants, according to a CBS affiliate in San Diego.

The Oct. 27 raids were part of Operation Mic Drop, a San Diego Police Department investigation
targeting Mike’s Market on Ocean View Boulevard in Mountain View. Police say the market was a
haven for alleged violent and drug-related criminal activity, and that employees there were working with gang members to facilitate drug sales, which were funded through food assistance benefit fraud at the store.

The operation resulted in a 221 count indictment for 22 suspects, but citizens and civil rights
activists are up in arms about redacted warrants.

One search warrant left at a home in Spring Valley had all addresses, property locations, and person(s) to be searched information redacted.

More than a dozen officers allegedly showed up with a bull horn at Greg Otis’ house in Mountain View.

“They didn’t knock,” Otis said. “They just threw the flash bangs and jumped on the loudspeaker, ‘Come out with your hands up.’ I had to put my pants on, and my wife came out with her nightgown on. They took us across the street and handcuffed us.”

The incident left the couple shaken.

“If you’re going to go to somebody’s house, tell the owner what you’re coming for. Don’t just barge on in there, you know, and never tell them what for,” Otis said.

Officers were searching for his nephew, who had a warrant for his arrest, Otis said. Officers searched the family’s home, where Otis said he has lived since 1976. He said officers did not present a search warrant nor find his nephew.

Another warrant at a house on Kempton Street in Spring Valley was also searched with a redacted warrant. Officers raided the house with four children inside, searching for a man with an arrest warrant, the resident said. The man was not there.

When asked to see the search warrant, officers left paperwork with the location, property, and persons to be searched redacted.

“No address or name on it. Whose house are they going to go to? Anybody in San Diego?” said Tasha Williamson, a local civil right activist. “You cannot come into people’s homes and not provide them a search warrant. You’re handcuffing grandmothers and grandfathers and disheveling their lives and don’t tell them anything? Then you don’t take anything from the house? That’s wrong,” Williamson said.

An SDPD spokesperson issued a statement, which read in part as follows.

“Redacted/sealed warrants DO NOT mean police can search any location they want. The information is simply redacted or sealed on that copy. Warrants are court orders issued and signed by a superior court judge.”

In response to the outcry, The San Diego County District Attorney reviewed arrest and search warrants used by officers to raid homes looking for the indicted individuals.

“My understanding is that those warrants were provided to the individuals that were at that
location, albeit in a sealed fashion, and that is entirely lawful and consistent with what the
judge’s orders allow,” said Deputy District Attorney Miriam Hemming.

However, if officers seize property, they do have to give the homeowner a list of the items they
took. It’s up to the officers to make sure they raid the correct address.

“If law enforcement targets the wrong location, then there’s a remedy in court. There are motions that defense attorneys can file. But the onus is on law enforcement to make sure that they go to the right location, and that’s their responsibility in every case,” said Hemming.

There is no requirement under state law to give residents a copy of the search warrant specifying the address to be searched, he said.

Friedrich Seiltgen is a retired Master Police Officer with 20 years of service with the Orlando
Police Department. He conducts training in Lone Wolf Terrorism Counterstrategies, Firearms
and Active Shooter Response.