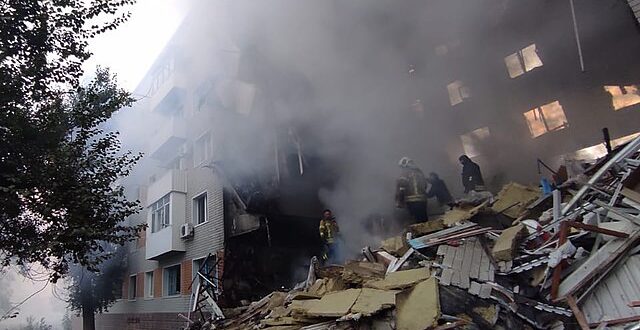 KREMINNA, Ukraine — For the paratroopers of a Ukrainian airborne brigade, there’s only one way to describe the waves of Russian infantry who are relentlessly pressing the Ukrainian lines in and around this Donbas city: Meat.

“First, they throw in the mobilized soldiers for certain death, like meat,” said one soldier who asked not to be identified due to military regulations. “Then, if they break through, the more experienced fighters move in.”

But according to interviews with Ukrainian soldiers and accounts published on Russian military blogger accounts on Telegram and elsewhere, the bloodshed is no less senseless and relentless. It’s unclear how long it will last, though: One Ukrainian official claims that Kreminna is on the verge of being recaptured by Ukrainian forces.

“Bakhmut, Kreminna: The situation there is difficult, excruciating,” President Volodymyr Zelenskiy said in his nightly video address on December 26. The Russians “are using all available resources — and these are significant resources — to squeeze out some sort of progress.”

Located in the Luhansk region, just across the administrative border with the Donetsk region, Kreminna sits on a major north-south highway about 25 kilometers northwest of Syevyerodonetsk. That city was captured by Russian forces in late June after a brutal siege and intense, street-by-street urban combat.

In September, Ukrainian forces pulled off a surprise counteroffensive in the Kharkiv region to the northwest, forcing Russian troops into a wide retreat. Ukrainian forces also recaptured the city of Lyman, in the Donetsk region, and began pushing east to Kreminna and to the town of Svatove, further north.

Since then, Ukraine’s advances in this section of the battlefield have stalled, particularly as Russia began channeling its poorly trained, newly mobilized troops to reinforce their defenses.

Serhiy Hayday, the head of the Luhansk regional military administration, said in a post on Twitter on December 26 that Russian civilian authorities and local military command units had pulled back from Kreminna, withdrawing to safer territory further east.

That report could not independently confirmed.

“The Russians understand that if they lose Kreminna, their entire line of defense will fall,” Hayday said in a separate post on Telegram.

In a post two days later, he suggested that if Ukrainian forces take back Kreminna, they may also swiftly recapture several other cities or towns in the Luhansk region, saying that “after all, they have been destroyed to such an extent that they cannot be defended.”

Soldiers interviewed by Current Time on December 24 not far from the front line in Kreminna said they were upbeat about Ukraine’s ability to hold its lines, and described constant assaults by Russian units.

“In the case of the Kharkiv offensive, they were more dispersed. Now they are very focused. There are a lot of them,” another soldier said in an interview.

“We fight with our brains. They fight with numbers. Because their resources –we’re not revealing some secret here — are much greater than ours,” he said.

In some locations, including in Bakhmut, photographs and videos posted by military bloggers and even the soldiers themselves point to outdated battlefield tactics that are reminiscent of World War-I trench warfare, in which waves of infantrymen advance across open fields and try to storm enemy trenches, only to be mowed down by gunfire.

“They just push and shove their way through. And a lot of them die. Because they have no tactics, nothing of the sort,” another soldier said. “They just go like meat. There were some cases when the infantry said that they went in without any [armed vehicles], or without machine guns.”

“They have a lot of artillery,” a fourth soldier said, adding that the newer shells that have been provided by the United States and NATO allies to Ukraine are more effective. “Our [artillery] hits with 5- to 10-meter accuracy. But these new ones that we’ve been given, it’s 4 to 5 meters.”

Another soldier said Ukrainian forces were focused on disrupting Russian supply lines in the settlements around Kreminna.

“The enemy’s logistics routes run through these villages. And, as we know, logistics is a priority. A fighter who isn’t backed up properly can’t fight,” he said. “There’s a railway junction. [Seizing it] will greatly disrupt their logistics. Then, I think, they will retreat from Bakhmut.”

The Institute for the Study of War, a Washington-based research group, said reports indicated that Russian units fighting along the Svatove-Kreminna front line included mobilized soldiers from the Moscow region, as well as the 144th Motor Rifle Division of the 20th Combined Arms Army and the 8th Combined Arms Army.

“This composite force grouping suggests that Russian forces are pulling troops from various points throughout the theater to fill holes in the Svatove-Kreminna line and compensate for the continued degradation of conventional units,” the institute said in its December 26 report.

Written by Mike Eckel based on reporting by Borys Sachalko of Current Time.

Previous We Knew They Weren’t Coming Back: Vietnam’s Brutal ‘Nine Days in May’
Next Fallen Police Officer’s Wife Finds Letter He Left For Her: ‘My Dead Husband Saved My Life’