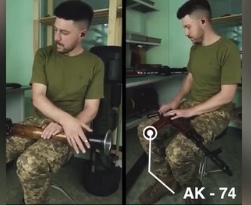 Ukraine has released a video of a soldier improvising a catchy musical composition using military weapons as instruments. The ad hoc “instruments” are various small arms used by the Ukrainian military to defend the country against Russian armed forces.

In the video, percussionist Alexander Seleznov uses chains, a Stinger, a Javelin, an AK-47, and more to create a military version of the “Skysticks” beats he creates as a civilian in Ukraine. The musical weapons session was posted on Ukraine’s Ministry of Defence Twitter page.

Previous Four Marines and a Night on the Town: What Possibly Could Go Wrong?
Next Who Was D.B. Cooper? Mysterious Hijacking Remains Unsolved for More Than 50 Years