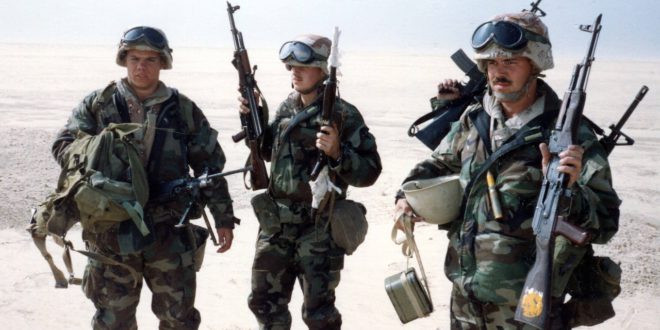 Some of the Marines who accompanied Mike Sullivan to Kuwait City pose for a photo in late January 1991. They are holding some captured Iraqi souvenirs.

Vietnam Veteran Marine Sullivan, A Camera in one hand, a rifle in the other in Desert Storm

Shortly after graduation in April 7, 1968, he deployed to South Vietnam as a rifleman, commonly referred to as a grunt. He served with India Company, 3rd Battalion, 4th Marines in I Corps, an area in the far north central highlands about 10 kilometers south of the demilitarized zone.

On Aug. 7, 1990, the United States and a coalition of 34 nations began a military buildup in northeast Saudi Arabia, known as Operation Desert Shield, with the goal of liberating Kuwait either by diplomacy or force.

As the buildup was taking place, CBS News asked for volunteers to cover what they thought would likely become a shooting war, Sullivan said.

At the time, Sullivan was based in Johannesburg as a CBS Radio stringer, which means he worked  on an as-needed basis and was not a permanent staff member.

“I talked it over with Larry Doyle, [the] CBS bureau chief in South Africa, who was also a Marine Corps Vietnam veteran. He opted to go to Baghdad, but I recall telling him I wanted to be on the side with all the guns,” Sullivan said, referring to the troops who would be liberating Kuwait.

The CBS base of operations, and that of most of the other news media outlets, was at a hotel near the airport in Dhahran, Saudi Arabia.

Sullivan recalls being issued a dog tag by the U.S. military. Dog tags are small, metal identifiers worn by all service members and used to identify them should they be killed.

As a reporter, Sullivan said he opted to be embedded with the Marines—his stint as a Marine gave him a special affinity. They were encamped in a large tent city outside Dhahran.

Sullivan interviewed countless young Marines and Navy corpsmen who knew they were about to go into harm’s way.

Once Marines found out that I was in the Corps during the Vietnam War, they opened up and were eager to talk.

“One thing that struck me about these young Marines and Navy corpsmen was their steadfastness and confidence,” he said. “They wanted to know about Vietnam and wondered if they [would] measure up in combat. I told them they would, and they did.”

The ground war began Feb. 24, 1991, and would last about 100 hours. Sullivan and three other journalists — a photographer, a United Press International wire service reporter and a United Kingdom journalist — rode in a Humvee along with two Marines who were armed and alternated driving.

They made their way north, crossing a sand berm into Kuwait. The trip, Sullivan said, was fairly uneventful.

One vivid memory, he recalled, was the smoke from the oil wells that the Iraqis had set on fire. “There was a constant hazy murkiness that hung in the air — I called it nuclear dawn.”

Sullivan said he also had remembered seeing land mines scattered about because the retreating Iraqis didn’t have time to bury them in the sand. “The Iraqis were surrendering in droves, and we could see columns of them being marched to the rear,” he said.

Sullivan said he and his traveling companions aimed to reach the U.S. Embassy in Kuwait City to document its capture.

As they approached Kuwait City, Sullivan said the group could hear gunfire in the distance. “Gradually, the Kuwaitis realized the Iraqis had fled and started coming out and driving around in their cars. The Kuwaitis were checking us out, and when they realized we were Americans and one British [citizen], they were joyous and showered us with candy and led us to the embassy.”

Outside the embassy compound, Sullivan said they met a Marine Corps reconnaissance team riding in what looked like dune buggies from the “Mad Max” action movie.

That team had already secured the embassy, but the lieutenant said that in two days there would be a photo opportunity to show the embassy being “liberated,” he said laughing.

“He was right. A day or two later, I watched on TV a unit rappel out of helicopters to “secure” the embassy,” Sullivan said.

Sullivan came from a family with strong military ties. His mother, Barbara, became an Army civilian in 1940 before the start of World War II. She stayed in the Army for 38 years.

Sullivan’s father, Edwin, made the Army a career. Edwin Sullivan was wounded four times in the European theater during World War II; he was awarded the Silver Star and Bronze Star medals.

Sullivan said he became a journalist because he wanted to travel the world and enjoyed talking to people. He was also a war correspondent in Nicaragua, Lebanon and Afghanistan during the Soviet occupation. Besides CBS Radio, Sullivan was also a reporter for the “The Washington Times” newspaper and UPI.

Sullivan was born in Walter Reed Army Medical Center in Washington, D.C., in 1949.

In 1990, he visited Vietnam and located places where he had served and where some members of his platoon had been killed or wounded.