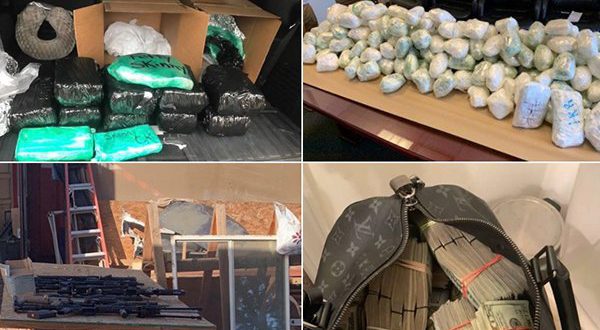 The U.S. Military Academy and fire-rescue officials reported that two of West Point school’s cadets, including a football player, a total of six people overdosed on fentanyl-laced cocaine at a Florida vacation home during spring break.

Two of the six were in critical condition, rescue and emergency officials said.

A West Point official told The Associated Press that one of the cadets who was hospitalized is an Army football player, ESPN news reported the AP release. Fort Lauderdale Fire-Rescue Battalion Chief Steve Gollan told the AP on Friday afternoon that two critically ill victims were on ventilators.  Two victims are stable. Of the six, two others became ill while trying to give them CPR from the residue on their bodies.

100,000 did from drug overdoses int he United States last year:

Operation Angels Envy involved a set of multi-year investigations, identifying large networks of suppliers and distributors in the Washington, D.C. metropolitan area, working for a dangerous transnational drug trafficking organization with direct ties to the Sinaloa Cartel. The operation uncovered and dismantled seven, violent, drug trafficking organization cells in the D.C., Maryland, and Virginia area, and resulted in 33 high-level individuals charged, hundreds of pounds of deadly drugs being taken off the streets, $5.4 million in U.S. currency, 32 rifles, 81 handguns, and other assets seized.

“This is good work. This is important work,” SAC Forget said at the press conference today. “All of us want and deserve safe neighborhoods. We need to act together to stop and hold those accountable who are bringing drugs and violence into our neighborhoods, and threatening our family’s safety and wellbeing, for their own, selfish gains. I am happy to say, together, we did that today.”

Since May 2017, investigations under Operation Angels Envy led to the identification and takedown of seven independent, violent drug trafficking organizations operating in the Washington D.C. metropolitan area; their Los Angeles-based transportation network, which used tractor-trailers and shipping crates to move ton quantities of methamphetamine, heroin, fentanyl, and other drugs across the country; and their Sinaloa Cartel supply cell. These drug trafficking organizations would then transfer profits and trafficked firearms back to the Sinaloa Cartel. Investigations into the takedown of the transportation network and supply cell led to the identification and takedown of other violent drug trafficking organizations in California, Missouri, Ohio, New England, and New York.

Operation Angels Envy culminated in one of the largest cumulative takedowns in the area – with 33 individuals charged; seizure totals of 473 pounds of methamphetamine, 42 kilograms of fentanyl (enough to potentially cause over 21 million people to die of an overdose – more than the population of D.C., Maryland, Virginia, combined), nine kilograms of heroin, 129 kilograms of cocaine, 5,100 pounds of other drugs, over $5.3 million in drug proceeds, 114 firearms (many of which were assault-style weapons); and over $700,000 in jewelry and vehicles.

A massive drug bust, which targeted the infamous Mexican Sinaloa Cartel, went down in the wealthy suburbs of Washington D.C.

The three year long investigation resulted in millions of dollars in cash, and thousands of pounds of lethal narcotics being seized, that were intended for distribution on U.S. soil.
During the investigation, which began in 2017 and concluding in 2020, authorities were able to directly connect prominent drug traffickers in the wealthy DC suburbs with the Sinaloa Cartel of Mexico, an infamous crime syndicate once led by Mexican drug lord Joaquin “El Chapo” Guzman.

The Sinaloa gang is far from alone in manufacturing and distributing the lethal drug Fetanyl, according to ICE

The Chinese nationals are the first manufacturers and distributors of fentanyl and other opiate substances to be designated as Consolidated Priority Organization Targets (CPOTs). CPOT designations are those who have “command and control” elements of the most prolific international drug trafficking and money laundering organizations.

On Sept. 7, Xiaobing Yan, 40, of China, was indicted in the Southern District of Mississippi on two counts of conspiracy to manufacture and distribute multiple controlled substances, including fentanyl and fentanyl analogues, and seven counts of manufacturing and distributing the drugs in specific instances.  Yan, a distributor of a multitude of illegal drugs, used different names and company identities over a period of at least six years and operated websites selling acetyl fentanyl and other deadly fentanyl analogues directly to U.S. customers in multiple cities across the country.  Yan also operated at least two chemical plants in China that were capable of producing ton quantities of fentanyl and fentanyl analogues.  Yan monitored legislation and law enforcement activities in the United States and China, modifying the chemical structure of the fentanyl analogues he produced to evade prosecution in the United States. Over the course of the investigation, federal agents identified more than 100 distributors of synthetic opioids involved with Yan’s manufacturing and distribution networks.  Federal investigations of the distributors are ongoing in 10 judicial districts, and investigators have traced illegal proceeds of the distribution network.  In addition, law enforcement agents intercepted packages mailed from Yan’s Internet pharmaceutical companies, seizing multiple kilograms of suspected acetyl fentanyl, potentially enough for thousands of lethal doses.