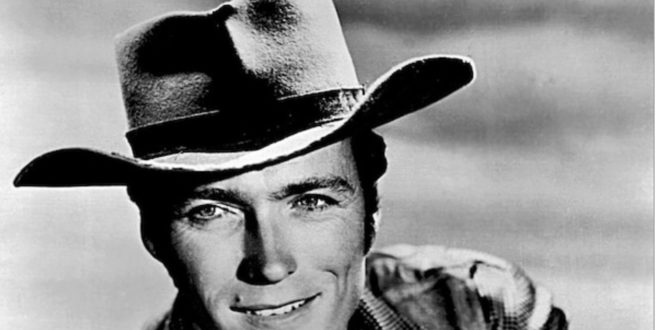 Actor Clint Eastwood in a 1961 publicity photo for the TV show, "Rawhide."

The acclaimed actor was also in the military.

In 1951 Eastwood was drafted into the Army during the Korean War. He was a swimming instructor at Fort Ord, California.

He was a passenger on a Navy AD-1Q torpedo bomber that developed engine problems and crashed off the California coast near Point Reyes, not far from San Francisco. He and the pilot swam to shore, two miles away, in the frigid water.

That real-life event foreshadowed his movie role as Frank Morris in the 1979 film “Escape from Alcatraz,” in which he and two other men escape the penitentiary on Alcatraz Island, swimming away in the frigid water of San Francisco Bay.

Eastwood was honorably discharged from the Army in 1953.

Some Other Eastwood Films

Before his film career Eastwood was an aspiring musician, preferring it to acting. In 1959, he produced the album “Cowboy Favorites,” which include some classics such as Bob Wills’ “San Antonio Rose” and Cole Porter’s “Don’t Fence Me In.”

Eastwood composed the film scores of “Mystic River,” “Million Dollar Baby,” “Flags of Our Fathers,” “Grace Is Gone,” “Changeling, Hereafter,” “J. Edgar,” and the original piano compositions for “In the Line of Fire.” He wrote and performed the song heard over the credits of “Gran Torino” and also co-wrote “Why Should I Care” with Linda Thompson and Carole Bayer Sager, a song recorded in 1999 by Diana Krall.

“Changeling” was nominated for Best Score at the 14th Critics’ Choice Awards, Best Original Score at the 66th Golden Globe Awards, and Best Music at the 35th Saturn Awards.

From Academy Award-winning director Clint Eastwood comes the World Was II epic “Flags of Our Fathers,ﾔ produced by Eastwood, .

February 1945. Even as victory in Europe was finally within reach, the war in the Pacific raged on. One of the most crucial and bloodiest battles of the war was the struggle for the island of Iwo Jima, which culminated with what would become one of the most iconic images in history: five Marines and a Navy corpsman raising the American flag on Mount Suribachi. The inspiring photo capturing that moment became a symbol of victory to a nation that had grown weary of war and made instant heroes of the six American soldiers at the base of the flag, some of whom would die soon after, never knowing that they had been immortalized. But the surviving flag raisers had no interest in being held up as symbols and did not consider themselves heroes; they wanted only to stay on the front with their brothers in arms who were fighting and dying without fanfare or glory.

ﾑFlags of Our Fathersﾒ is based on the bestselling book by James Bradley with Ron Powers, which chronicled the battle of Iwo Jima and the fates of the flag raisers and some of their brothers in Easy Company. Bradleyﾒs father, John ﾓDocﾔ Bradley, was one of the soldiers pictured raising the flag, although James never knew the full extent of his fatherﾒs experiences until after the elder Bradleyﾒs death in 1994.

Previous Putin’s Military is Badass, but it’s “Diversity Sucks?: Tensions with NATO high
Next SecDef Messages: China Remains ‘Pacing Challenge’ not threat, Putin Should behave and the “War” at home