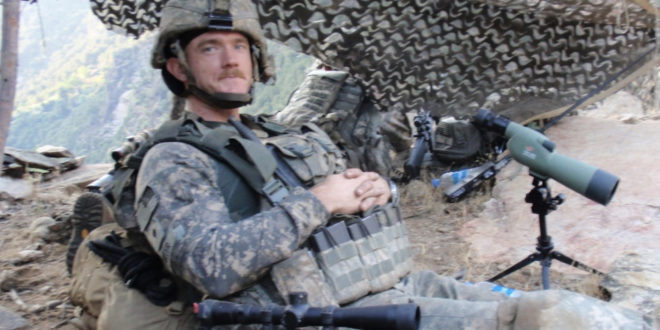 Army Spc. Ty Carter, a scout for the Black Knight Troop, waits at a post in Afghanistan in 2009.

Army Staff Sgt. Ty Carter in the Battle of Kamdesh

With the inside of an armored vehicle was the only thing keeping him safe from a hail of gunfire, Army Staff Sgt. Ty Carter had the courage to rescue an injured comrade on the ground outside during an intense battle in Afghanistan. For his bravery and devotion, he earned the Medal of Honor.

Carter was born in Spokane, Washington, on Jan. 25, 1980, and the family moved to the California Bay Area the following year. A decade later, they moved back to Spokane, where Carter graduated from North Central High School in 1998. Within months, he’d joined the Marines as a combat engineer.

After four years of service, Carter left the Marines and went to community college to study biology. However, he said he liked the sense of purpose he’d had in the military, so in January 2008, five years after he left the Marines, he joined the Army as a cavalry scout.

In May 2009, then-Spc. Carter deployed to Afghanistan with his unit, the Black Knight Troop of the 3rd Squadron, 61st Cavalry Regiment, 4th Brigade Combat Team, 4th Infantry Division. Not long after their arrival in the country, the unit was sent to Combat Outpost Keating, one of the country’s most remote and vulnerable spots. COP Keating was near the Pakistan border in a deep valley surrounded by tall mountains and was known to the soldiers stationed there as “the fishbowl” because they were easy targets for hidden enemies.

While COP Keating’s soldiers constantly shielded themselves from enemy fire, little was able to prepare them for the events of Oct. 3, 2009, which became known as the Battle of Kamdesh.

Early that morning, Carter and 52 other American soldiers were woken by the sounds of an attack. About 300 Taliban fighters hidden in the hills surrounding all four sides of the outpost fired on them using rocket-propelled grenades, anti-aircraft machine guns, mortars and other small arms.

Carter immediately jumped out of bed, threw on his boots and Kevlar vest and quickly began to do his job, which was to reinforce a forward battle position — in this case, a Humvee that housed the long-range advanced scout surveillance system. He ran at least twice through a 100-meter gauntlet of enemy fire to resupply ammunition to the men in the vehicle, and he voluntarily stayed with them to defend it. The Humvee’s tires had quickly been flattened, which meant Carter and four other soldiers were trapped there as the barrage of gunfire continued.

As Taliban fighters moved onto the outpost, the men knew they had to run to safety, or they would die there. So, Carter and Sgt. Brad Larson provided cover for the three other soldiers to try to escape. Two of the men went down quickly, while the third, Spc. Stephan Mace, disappeared into a cloud of smoke.

Carter and Larson stayed in the Humvee for hours, taking shots out of the windows with their rifles when they could to defend themselves. Eventually, Carter saw something on the ground — a wounded Mace, about 30 yards away from the Humvee. Carter said he wanted to help his comrade, but Larson initially refused, saying it was too dangerous.

Larson soon relented, though, and Carter began a treacherous journey outside the protections of the Humvee. The young soldier ran through a hail of rocket propelled grenades and machine-gun fire to get to Mace and tend to his devastating leg wounds. Carter then picked up his fellow soldier and carried him back through the heavy gunfire into the Humvee.

Carter didn’t stay inside long, though. He got back out of the vehicle to search for something that would help rescue them. He managed to recover the squad’s radio, which allowed them to coordinate their evacuation with other soldiers at the outpost. Those soldiers, led by Staff Sgt. Clint Romesha, provided cover fire as Carter and Larson ran from the Humvee while carrying Mace on a stretcher. They made it through about 100 meters of withering enemy fire to get to the aid station.

While they’d made it out of a tough situation, the battle wasn’t over, so Carter returned to the fight. By this point, much of the outpost had caught fire, and flames were bearing down on the aid station where they’d just delivered Mace. Several other soldiers lay wounded inside, too, so Carter left the safety of cover one more time. He grabbed a chainsaw that he’d found and cut down a burning tree, saving the aid station from being engulfed by flames.

Carter then worked alongside his fellow soldiers to push back the enemy. After more than 12 hours of fighting, reinforcements arrived, and they were able to retake the outpost.

Sadly, Mace didn’t survive the ordeal. He died in surgery hours later. But his mother, Vanessa Adelson, was quoted as saying that her son died at peace thanks to Carter’s courage.

“I’m so grateful … because Stephan could have died in the dirt,” Adelson said.

COP Keating, which had been scheduled to close, was evacuated within days of the battle, then destroyed.

Carter suffered several physical and psychological injuries from the ordeal, but he remained on deployment for several months. He was stationed at Fort Lewis, Washington, when he returned to the U.S. He even deployed a second time to Afghanistan in May 2012.

While Carter was notified shortly after the Battle of Kamdesh that he was being considered for the Medal of Honor, the official news that it had been approved didn’t come through until nearly four years later.

On Aug. 26, 2013, Carter received the nation’s highest honor from President Barack Obama during a ceremony at the White House. Carter’s wife, Shannon, their three children, and several of his family members were able to attend. Carter has always said that the honor belongs to the entire Black Knight Troop, including the eight soldiers who died that day at COP Keating.

A few months before Carter’s award, Romesha — the soldier who had led the cover fire that helped Carter, Mace and Larson escape the doomed Humvee — also received the Medal of Honor. It marked the first time since the Vietnam War that two living recipients earned the medal during the same battle.

Carter left the Army as a staff sergeant in 2014. He was very open about his struggles with post-traumatic stress disorder, so he decided to become a mental health advocate. In the years since his honorable discharge, he’s become a motivational speaker who works often with veterans on their mental health education.

Carter’s actions in Afghanistan were depicted in a recent movie. “The Outpost,” released in 2020, was based on the 2012 book about the Battle of Kamdesh.