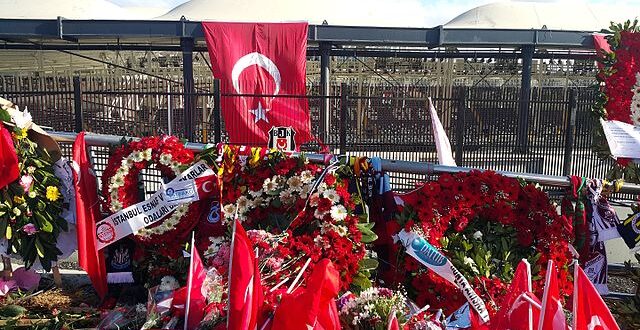 Arrest in Istanbul Bomb Attack as Turkey Slams US

Police in Turkey have arrested a woman suspected of causing a devastating explosion Sunday in Istanbul, officials there said. Although motives remain unclear as of Monday, Ankara accused Syrian Kurdish militants backed by the United States of ordering the attack.

“There is much to uncover, but this is a starting point,” one European security official told Soldier of Fortune.

A bomb explosion at a popular Istanbul shopping center Sunday has left at least six people dead and more than 50 others injured. Turkish President Recep Tayyip Erdogan said the attack had what he called “the smell of terror.”

Ambulances rushed the injured to nearby hospitals while police secured the blast scene. Istiklal Avenue — in the heart of Istanbul — was packed with locals and tourists when the powerful blast ripped through the area at around 4:20 p.m. local time. Authorities said a government ministry worker and his daughter were among the dead.

President Recep Tayyip Erdogan spoke to reporters after the blast.

Video of the moment the bomb went off was widely circulated on social media.

Kurdish separatists and Islamic militants have bombed Turkish cities in the past. Erdogan said Sunday’s blast was likely due to terrorism.

He said, “It would be wrong to say…. ‘This is undoubtedly a terrorist attack.’ But the initial developments and initial intelligence from my governor is that it smells like terrorism.”

Erdogan also said those who engaged in terrorism against Turkey were defeated in the past and would be in the future. The Turkish leader pledged that those responsible for Sunday’s blast would be found and punished.

So far, no one has claimed responsibility.

In 2015 and 2016, the Islamic State militant group carried out a wave of fatal bombings in Istanbul, targeting tourists, including Istiklal Avenue, the scene of Sunday’s explosion.

The 2016 attack killed at least five people including two Israelis and two Americans.

With reporting by Andalou, and by Dorian Jones, VOA.

Previous US Forces Test-Drop Cruise Missile From an Aircraft
Next We Knew They Weren’t Coming Back: Vietnam’s Brutal ‘Nine Days in May’