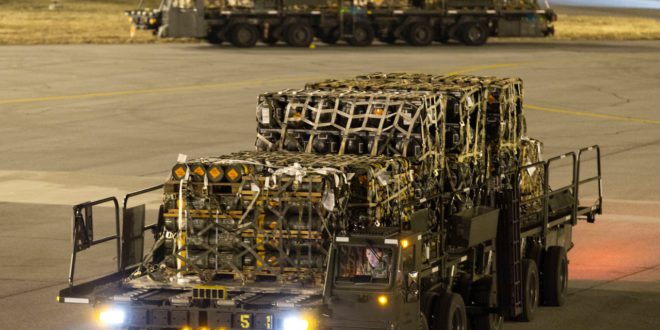 THE PRESIDENT:  You know, I’ll be completely honest with you: It’s a little bit like reading tea leaves.  Ordinarily, if it were a different leader — the fact that he continues to build forces along Ukraine’s border from Belarus all the way around — you’d say, “Well, that means that he is looking like he’s going to do something.”

But then you look at what his past behavior is and what everyone is saying in his team, as well as everyone else, as to what is likely to happen: It all comes down to his — his decision.


There is not going to be any American forces moving into Ukraine.

Austin Places 8,500 Troops on Heightened Readiness to Deploy to Europe

The 8,500 troops are based in the United States and would be part of the NATO Response Force, if that group is activated. The American forces would be in addition to the significant combat-capable U.S. forces already based in Europe “to deter aggression and enhance the alliance’s ability to defend allies and defeat aggression if necessary,” Kirby said.

The NATO Response Force is a 40,000 multinational, multidomain construct. NATO has not yet activated the unit. Within the force is the “very high readiness joint task Force.” This element of about 20,000 includes a multinational land brigade of around 5,000 troops and air, maritime and special operation forces components.

“Secretary Austin has placed a range of units in the United States on a heightened preparedness to deploy, which increases our readiness to provide forces if NATO should activate the NRF or if other situations develop,” the press secretary said.

The personnel in these units are being told of the heightened preparedness to deploy today. What units are affected will be released once personnel and their families are informed, Kirby said.

If the NATO force is activated, Austin’s order would allow the United States to rapidly deploy additional brigade combat teams, along with units specializing in logistics, medical, aviation, intelligence, surveillance and reconnaissance, transportation and more, he said.

“Again, I want to reinforce that as of now the decision has been made to put these units on higher alert and higher alert only,” Kirby said. “No decisions have been made to deploy any forces from the United States at this time.”

Some of the units were already on a heightened readiness to deploy posture. Austin’s decision shortened the tether. “In some cases, units would go from say 10 days to prepare to deploy, to five days,” Kirby said.

Austin will continue to consult with President Biden and the United States will maintain close coordination with allies and partners.

These are prudent measures, Kirby said. The United States and its allies have a good “site picture” of the Russian moves to surround Ukraine. “It’s very clear that the Russians have no intention, right now, of de-escalating,” he said.

There is still time and space for negotiations to defuse the situation, and Kirby urged Russian leader Vladimir Putin to do just that.

Passes and leaves for the service members affected are canceled, DOD officials said. Instead of having 10 days to deploy, the units must deploy in half that, if so ordered. “They will have to make whatever preparations they feel they need to make to be able to meet that five-day commitment,” Kirby said.

For different units this will mean different things from ensuring vehicles are ready to checking communications systems to ensuring the “beans and bullets” needed are there. “I’m sure there are personnel readiness things that they have to do,” Kirby said. “That again, is one of the reasons why I’m not giving [out the names of] units today. The units are getting notified and we want to also give them time to talk about this with their families – this potential deployment order.”

NATO Allies are putting forces on standby and sending additional ships and fighter jets to NATO deployments in eastern Europe, reinforcing Allied deterrence and defence as Russia continues its military build-up in and around Ukraine.

In the past days, a number of Allies have made announcements regarding current or upcoming deployments. Denmark is sending a frigate to the Baltic Sea and is set to deploy four F-16 fighter jets to Lithuania in support of NATO’s long-standing air-policing mission in the region. Spain is sending ships to join NATO naval forces and is considering sending fighter jets to Bulgaria. France has expressed its readiness to send troops to Romania under NATO command. The Netherlands is sending two F-35 fighter aircraft to Bulgaria from April to support NATO’s air-policing activities in the region, and is putting a ship and land-based units on standby for NATO’s Response Force. The United States has also made clear that it is considering increasing its military presence in the eastern part of the Alliance.

NATO Secretary General Jens Stoltenberg said:  “I welcome Allies contributing additional forces to NATO. NATO will continue to take all necessary measures to protect and defend all Allies, including by reinforcing the eastern part of the Alliance. We will always respond to any deterioration of our security environment, including through strengthening our collective defence.”

NATO is a defensive Alliance. In response to Russia’s illegal annexation of Crimea in 2014, NATO increased its presence in the eastern part of the alliance, including with four multinational battlegroups in Estonia, Latvia, Lithuania and Poland. These units, led by the United Kingdom, Canada, Germany and the United States respectively, are multinational, and combat-ready. Their presence makes clear that an attack on one Ally will be considered an attack on the whole Alliance. There were no NATO forces in the eastern part of the Alliance before 2014.